Tara Favors ’95, has made a career working for some of the top businesses in America from Revlon to Morgan Stanley to Merrill Lynch. The foundation for her success was built during her undergraduate years in the College of Arts and Sciences. 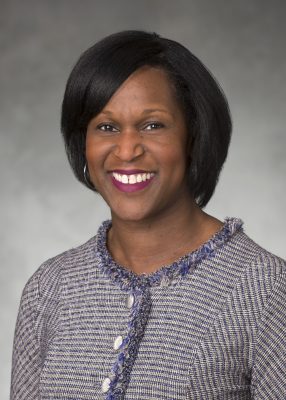 “I truly found a home at Syracuse. I fondly remember my professors who challenged me to think beyond the problems in front of me,” Favors says. “The rigor and diversity of my schedule opened my eyes to the vast opportunities that awaited.”

Recently, Favors was promoted to managing director at Morgan Stanley. With the functional title of head of company human resources, Favors is responsible for developing and implementing the Human Resources strategy for the corporate functions across the firm.

In the role, Favors is involved in compensation and promotion planning, performance management, talent development and diversity and inclusion and recruiting.  It’s a broad responsibility that spans a population just under 5,000 employees globally.

“It is an honor to be promoted to managing director at, what I believe, is the most preeminent bank on Wall Street,” says Favors. “It is a visual sign that I have a ‘seat at the table’ within the businesses I support.”

“Because nothing can be achieved alone, I share this honor with my wonderful team who see the vision we want to create for the employees of the Firm,” Favors says. “Lastly, as a Black woman in financial services, this promotion means so much more because there are not many of us. With each promotion, the number grows and role models are created for those coming behind us.”

Formerly, Favors was an executive director, head of leadership development, at Morgan Stanley in charge of the firm’s leadership programs, executive coaching and leadership content.

Favors was hired into Merrill Lynch’s Human Resources Associate program at the very beginning of her career in 1997. Through that program, Favors worked in various business and disciplines of human resources across the firm.

In 2007, Tara left Morgan Stanley and joined Revlon as a senior director of Human Resources. In 2008, she joined Deutsche Bank as a vice president, senior generalist supporting the Asset Management business before she returned to Morgan Stanley in 2011.

Favors graduated from the College of Arts and Sciences with a B.A. in psychology with a minor in human resources. Favors also received an M.S. from the New School for Social Research in Human Resources.

Beyond work, Favors finds joy in spending time with her family: her husband, Dale, and sons, Dalton (14) and Davis (11), as well as her mother who lives with her. She is a marathon runner and is involved with a few meaningful nonprofits, fulfilling the philanthropic side of her, which she actually first found at SU through a high school mentoring program for teenage girls in the city of Syracuse, which she and friends founded.