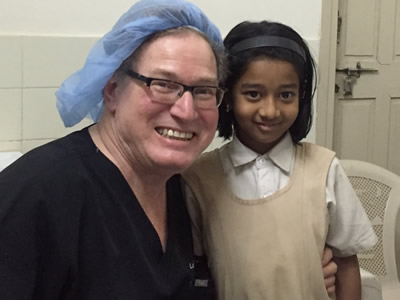 Larry Weinstein ’75 and a patient during a recent mission trip to India.

Larry Weinstein ’75 considers himself hyper-vigilant—a quality that has served him well in 30 years of practicing medicine.

As a pre-med student majoring in psychology, he was keenly aware of his surroundings at all times. “Personal safety and community awareness are important to me,” says the renowned plastic surgeon, speaking by phone from his office in Chester, New Jersey. “At Syracuse, I was a member of the University Senate, and paid close attention to drug and alcohol abuse. Still do. I like to know where everybody is, especially my friends, and that they are OK.”

Weinstein’s concern for others is apparent in his private practice, in which he has treated more than 30,000 patients, and in underserved communities in India, where he has performed thousands of surgeries, free of charge.

Such compassion has yielded a string of accolades, including the prestigious In Chul Song Award for Philanthropic Service from the American Society for Aesthetic Plastic Surgery. No surprise that Castle Connolly Medical, publisher of the acclaimed “Top Doctors” book series, has recognized Weinstein nationally and regionally every year for the past decade. He also is honored to be included in Inside Jersey magazine’s annual roundup of the state’s Top Doctors.

Nevertheless, people are surprised to learn that Weinstein did not go to an American medical school. An ongoing interest in Spanish, which began at P.S. 208, The Elsa Ebeling School, in Brooklyn and continued at Syracuse, eventually took him south of the border.

“I think I got the highest grade possible on my final exam for ‘Organic Chemistry II,’ which was one of Syracuse’s most difficult pre-med courses,” says the Brooklyn native. “Although I probably would have liked to have gone to med school in the United States, I was fortunate for the opportunity to immerse myself in Spanish.”

After graduation, Weinstein made his way to western Mexico, where he enrolled in the School of Medicine at the University of Guadalajara—the oldest private medical school and the oldest private university, respectively, in the country. By dint of hard work and perseverance, he earned an M.D. in 1979. That all of his coursework, including labs and lectures, was in Spanish only adds to the significance of this feat.

Upon returning to the United States, Weinstein embarked on a series of residencies throughout the Northeast, including ones at the Memorial Sloan Kettering Cancer Center and Columbia University Medical Center. It was during rigorous plastic surgery training at the SUNY Downstate Medical Center that he befriended Sharad Kumar Dicksheet, an Indian-born, American plastic surgeon. As founder of The India Project, Dicksheet organized pro bono surgical missions to India. His impact on Weinstein was swift and intense.

“[Dicksheet] literally wouldn’t stop to eat or go to the bathroom when performing surgeries,” Weinstein says of his mentor, who was wheelchair-bound and did not have a larynx. “It is estimated that he performed more than 100,000 free surgeries in India before his death [in 2011]. He was nominated for the Nobel Peace Prize six times.”

In 1988, Weinstein opened a private practice in Chester Woods Professional Park, situated among the green, rolling hills of historic Chester. His warm, affable personality, combined with a skilled, conservative approach to treatment, has made his practice a leader in cosmetic, plastic and reconstructive surgery.

While Weinstein has garnered a cult-like following throughout the Tri-State Area, he has a larger fan-base in India, which he has visited 15 times since 1993. Most of his trips are several weeks long, and take place in large, sprawling cities, such as Pune and Nagpur, where public health care is overburdened or virtually nonexistent. 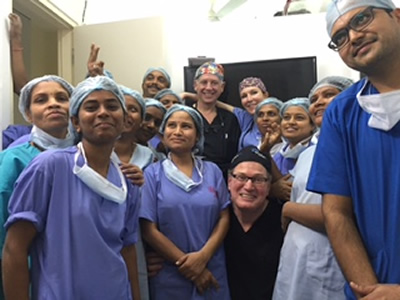 Weinstein and his staff treated more than 870 people during their last trip to India.

At first, Weinstein treated only a few hundred people per visit. He eventually brought along two other plastic surgeons and a half dozen surgical specialists to boost capacity. During his latest trip, Weinstein saw more than 870 people in one week. (“We worked from nine in the morning to nine at night, and didn’t take breaks, except for the occasional cup of chai tea,” he says.) Most of his patients were children with facial defects, caused by genetic problems, environmental issues or lack of proper nutrition during pregnancy.

“These kids often are ostracized from their communities, and cannot attend school, hold down a job or get married,” Weinstein says, adding that iron deficiency, anemia and infections account for many of the deformities. “We fix a lot of bilateral and unilateral clefts because the Indian healthcare system is overburdened with acute injury problems, which take priority over congenital cleft-lip treatments. We also open eyelids, mend deformed ears and smooth scars and burns.”

Weinstein recalls a trip to Hubballi, a large industrial city in southern India, where he treated a boy with a cleft lip. Two years later, his parents came to see Weinstein, and presented him with a school photo of their son. “He looked so handsome. I shared his photos with my colleagues,” he beams.

One thing Weinstein has learned is that plastic surgery is not always about vanity. In fact, the many breast augmentations, tummy tucks and facelifts he performs allow him to donate his time to helping India’s impoverished communities.

Congenital problems (e.g., cleft lips and palates), burns, hand injuries and cancer-causing defects may represent the less glamorous side of Weinstein’s work, but he considers them vitally important. He also knows they require the special atraumatic techniques of a plastic surgeon.

“You’d be amazed at how many patients, especially older ones, are stigmatized or ignored by society,” says Weinstein, who, in his quest for beauty, also is an avid gardener. “It’s gratifying to make someone feel youthful or sexy again.”

Weinstein explains how people in the West sometimes drop tens of thousands of dollars on “magical machine treatments” to make themselves look younger, but then realize that the only magic involved was the disappearance of their money.

He is particularly proud of his gentle, rejuvenative procedures that remove jowls, restore necklines and instill confidence.

“A facelift with SMAS [superficial muscular aponeurotic system, which is an area of musculature of the face] in the hands of a skilled surgeon can help restore a more natural-looking, youthful appearance,” says Weinstein, who has performed face-lifts on men and women from North Carolina and New Jersey to England, the Ukraine and Russia.

Weinstein credits the College of Arts and Sciences for instilling in him the virtues of hard work and good citizenship. He also learned how to collect, analyze and interpret data—skills that prepared him for medical school, and have come in handy throughout his career. It was in the Department of Psychology that Weinstein was exposed to the work of B.F. Skinner, whose theory of operant conditioning (in which behavior is controlled by consequences) fired his imagination. “Syracuse helped me develop my research and analytical skills. It showed me the importance of scientific literacy, regardless of one’s career path,” Weinstein says.

“I was not a straight ‘A’ student, but I’ve worked hard,” Weinstein adds. “I also have surrounded myself with good people, who have inspired me. It’s my turn to give back.”

Katherine McDonald, Ph.D., was in a brainstorming session with other editors from the innovative journal Autism in Adulthood and jokingly says that “I made the mistake of having a good idea for a special issue.” The result: McDonald, a professor…

The Barnes Center at The Arch, in partnership with the College of Law, COVID Project Management Office, Office of Student Living and Office of Diversity and Inclusion, will host a roundtable on Friday, April 16, at 1 p.m. focused on…

The Lender Center for Social Justice, along with the Center on Disability and Inclusion and the Landscape of Urban Education Lecture Series, is bringing the community together for a broad-ranging discussion on Policed Bodies: A Community Conversation on Race, Disability…

Nel Gaudé worked in kitchens for a decade before now pursuing a master’s degree in food studies. This tangible professional cooking experience gives them insight and allows them to think creatively about issues related to their coursework. After Gaudé was…