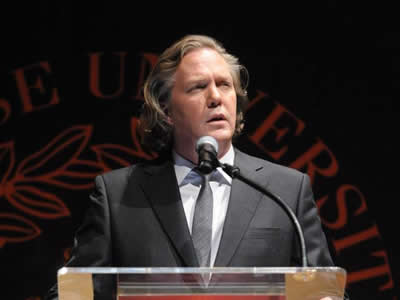 Politics, religion and philosophy in the post-secular world underlie two new books by a professor in the College of Arts and Sciences.

Gregg Lambert, director and principal investigator of the Central New York Humanities Corridor and Dean’s Professor of the Humanities, is the author of “Philosophy After Friendship: Deleuze’s Conceptual Personae” (University of Minnesota Press, 2017) and “Return Statements: The Return of Religion in Contemporary Philosophy” (Edinburgh University Press, 2016).

From 2008 to 2014, Lambert was founding director of the Syracuse University Humanities Center, which sponsors, among other things, Syracuse Symposium, a public humanities series focusing on an annual theme. His two books grew out of the 2010 Syracuse Symposium, whose theme was “Conflict: Peace and War,” and the Perpetual Peace Project (PPP).

The Humanities Center established PPP in 2008, in conjunction with the Slought Foundation in Philadelphia and the European Union National Institutes for Culture in Brussels.

Described by Lambert as a multilateral curatorial program, PPP sponsors events and projects that explore world peace from a humanistic perspective. They have included the Dalai Lama’s visit to Syracuse in 2012; the commissioning of multiple PPP films and essays; an art exhibition; and an international range of workshops, seminars and symposia. PPP also has produced joint initiatives, such as Histories of Violence, which surveys the theoretical, aesthetic and empirical dimensions of mass violence.

In 2015, PPP relocated to the Centre for the Humanities at Utrecht University (Netherlands). 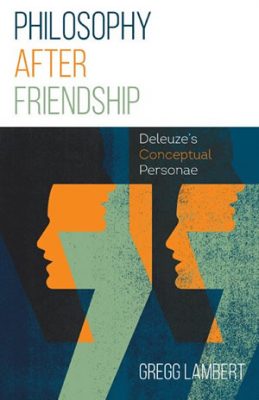 “I’ve constructed a genealogy to show how political thought has been structured by the emergence of these ‘conceptual personae.’ I am redefining the goals of future political philosophy, while removing its justification for war,” he says.

Today, the field encompasses a range of topics, including new debates over issues of democratic citizenship and cultural pluralism.

In “Philosophy After Friendship,” Lambert channels philosopher Immanuel Kant, whose iconic 1795 essay, “Perpetual Peace,” states that no one person or institution can make peace possible. “He felt that peace meant working together to bring about a more humane society,” says Lambert, who has authored a dozen other books and some 50 scholarly articles.

He illustrates this point in his book by referencing Kant’s principle of universal hospitality. Lambert recalls a recent incident in which members of Homeland Security interrogated a Nigerian woman and her children who were making a routine entry into the United States. Although the woman responded to their questions with an air of familiarity (recognizing that the answers to most of their questions were obviously in front of them, on their computer screens), she was made to feel like a stranger, with limited rights.

“Kant believed that, with universal hospitality, a stranger should not be treated as an enemy when he or she arrives in the land of another,” Lambert says. “Since hospitality is not a law, it only can govern different occasions as an ethical principle in a discourse of rights pertaining to the treatment of strangers. Thus, there is a certain ambiguity with different legal and juridicial expressions of hospitality as a right that remains imperfect and conditional.”

Drawing on the writings of 20th-century political philosopher Hannah Arendt, Lambert maintains that the true measure of any society is how it legally hosts its strangers. “We might wonder what is ‘universal’ in this case, and how it can be understood over and against what appears to be the absolute right of the state,” he adds.

It is through a Kantian lens that Lambert examines other notions of politics, liberty and justice. Lambert devotes considerable ink to Deleuze’s now-famous assertion that history has not been kind to the democratic ideal of friendship.

Jeffrey Bell, professor of philosophy at Southeastern Louisiana University, notes the “singular and provocative” manner by which Lambert deconstructs Deleuze’s argument. “Gregg Lambert offers an important reconceptualization of Kant’s essay, and, in doing so, he sets the stage for a post-war philosophy that remains true to Kant’s ideal,” Bell writes. 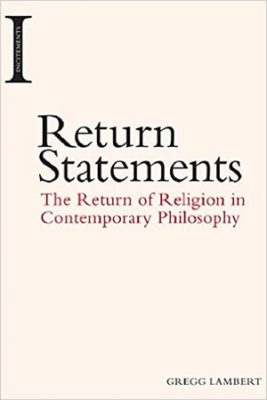 “Return Statements” also touches on some of these ideas, tracing the relationship between the resurgence of overtly religious themes in contemporary philosophy and the global “post-secular turn” that has been taking place since 9/11.

Lambert references essays by Derrida, Alain Badiou, Jean-Luc Nancy and John Caputo, the last whom is the Thomas J. Watson Professor Emeritus of Religion and Humanities in A&S.

“I’ve tried to explain why these ‘returns to religion’ are taking place simultaneously, all over the world,” Lambert says. “In the process, I’ve discovered a unique—if not, foreboding—sense of religion that seems to be permeating modern society.”

“Return Statements” has generated a buzz throughout the academy. Michael Naas, professor and chair of the philosophy department at DePaul University, calls it a “fascinating series of responses” to a new era of post-secularism. “[They are] philosophically astute, politically and historically well-informed, and often sharply satirically,” he writes, regarding Lambert’s observations about religion, faith, community, love and life.

Claire Colebrook, Penn State’s Edwin Erle Sparks Professor of English, praises the critical range of the book. “Neither dismissively condescending or unthinkingly reverent, [‘Return Statements’] is a stunning exploration of the return of religion in theory, philosophy and contemporary culture,” she writes. “From Derrida to [Slavoj] Zizek, Lambert provides a stylish and intelligent exploration of the various deployments of spirit for our ‘post-secular’ present.”

An accomplished professor and administrator, Lambert studies critical theory and film, 20th-century French philosophy and the dynamics of the contemporary university. Much of his work at Syracuse has involved the Humanities Corridor, a large-scale interdisciplinary project supported by the Andrew W. Mellon Foundation.

Off campus, Lambert is an inaugural senior research fellow of Western Sydney University’s Philosophy Research Initiative and an international scholar in the Global Collaborative Summer Program at Kyung Hee University in South Korea. A past member of the International Advisory Board of the Consortium of Humanities Centers and Institutes, Lambert has held visiting and distinguished faculty appointments throughout North America, Europe and Asia. He earned a Ph.D. in comparative literature and philosophy at the University of California at Irvine.

“I am not as interested in formulating public policy as I am in conceptualizing a peace movement,” Lambert says. “By bringing together theorists and practitioners, we in the humanities create a common space for discussing peace and international law.”