Dean Diane Lyden Murphy of the Falk College of Sport and Human Dynamics has been named co-chair of the Chancellor’s Task Force on Sexual and Relationship Violence. Murphy will succeed Dean Joanna Masingila of the School of Education, who will conclude her tenure as co-chair after serving since the task force’s inception in 2015. 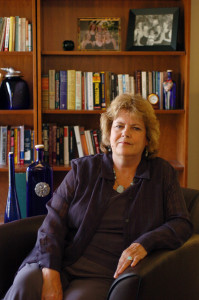 Murphy joins co-chair Rebecca Reed Kantrowitz, interim senior associate vice president and dean of the Division of Enrollment and the Student Experience, at the helm of the task force, which is made up of dedicated students, faculty and staff with various expertise and perspectives, along with the executive director of Vera House. The Chancellor’s Task Force on Sexual and Relationship Violence addresses sexual and relationship violence prevention, education and advocacy services. The task force’s leadership, situated in both the areas of academics and student experience, represents an overarching, university-wide focus on engaging the entire campus community in a collective and holistic effort to prevent sexual and relationship violence.

“I very much appreciate Dean Murphy taking on this important leadership role with the Task Force on Sexual and Relationship Violence,” says Chancellor Kent Syverud. “Dean Murphy’s leadership and perspective will be a valuable asset to the task force’s continued work. I also thank Dean Masingila for her leadership over the last two years focused on the important issues of sexual and relationship violence.”

The task force was appointed on April 23, 2015, at the recommendation of the Chancellor’s Workgroup on Sexual Violence Prevention, Education and Advocacy. Its members are charged with reviewing University policies, practices, programs and procedures; exploring promising practices and resources related to sexual and relationship violence; identifying best practices to communicate with the campus; and supporting efforts to prevent and raise awareness about sexual and relationship violence.

“I am honored to be part of the Task Force on Sexual and Relationship Violence,” says Murphy. “This group has made important strides across campus in raising awareness and empowering community members to be engaged participants in this critical work. I look forward to working with the task force members and engaging with the many people on campus who are committed to eliminating sexual and relationship violence.”

The task force’s efforts are in concert with the work of the University’s student peer educators, student organizations and volunteers, and many offices and individuals who are committed to raising awareness about sexual and relationship violence and fostering an environment free from violence.

“The work of the task force is rooted in the dedication of its members in making the campus a better place,” Kantrowitz says. “We are now fortunate to have Dean Murphy join us as we continue to enhance a safe, welcoming and inclusive living and learning environment for our students.”

To learn more about the Chancellor’s Task Force on Sexual and Relationship Violence, visit
http://inclusion.syr.edu/srv/chancellors-task-force/. There, campus community members can find important information about available resources and campus efforts to halt sexual and relationship violence.