Charles Willie: For Syracuse Champion of Justice, Friend of Dr. King’s, a Moment to Lift the Crowd at Hendricks Chapel 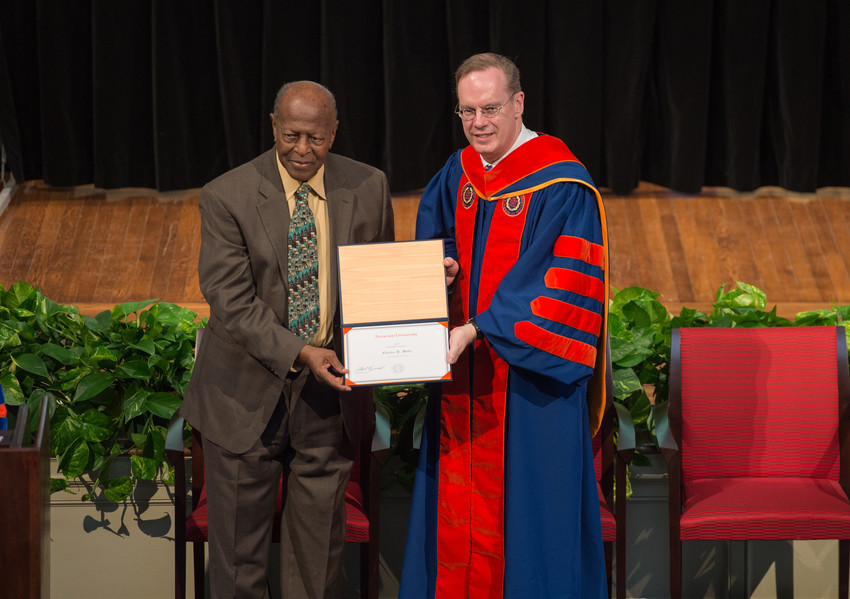 Charles and Mary Sue Willie took a casual ride around Syracuse early this week with their daughter, Sarah Susannah Willie-LeBreton, chairwoman of sociology and anthropology at Swarthmore College.

Mary Sue and Chuck Willie, as everyone calls him, traveled here from Massachusetts. They drove past Grace Episcopal Church, where they met almost 60 years ago. They idled in front of a beautifully restored home on Allen Street once owned by Mary Sue’s parents. They talked about a long-gone billiards hall, near campus, where Willie and the late Bill Mangin, an anthropology professor, used to shoot pool during lunch.

Their drive brought them back to campus, and past Sims Hall. Willie was a groundbreaking sociologist, a champion of social justice whose areas of research included desegregation, urban struggles and family life. In 1965, Willie helped arrange for a visit from Dr. Martin Luther King Jr., a close friend from their days together at Morehouse College. Willie gave the introduction before King spoke at the old Sims dining hall.

In those remarks, Willie described King as a “suffering servant” and—less than three years before King was assassinated—prophetically called him “a marked man,” his life at risk because of his work for racial equality.

Willie also made this promise: If he ever had a son, he’d name him Martin—both for King, who sought justice and peace between blacks and whites, and for Martin Buber, a philosopher who was an early advocate of a shared state for Israelis and Palestinians in the Middle East. 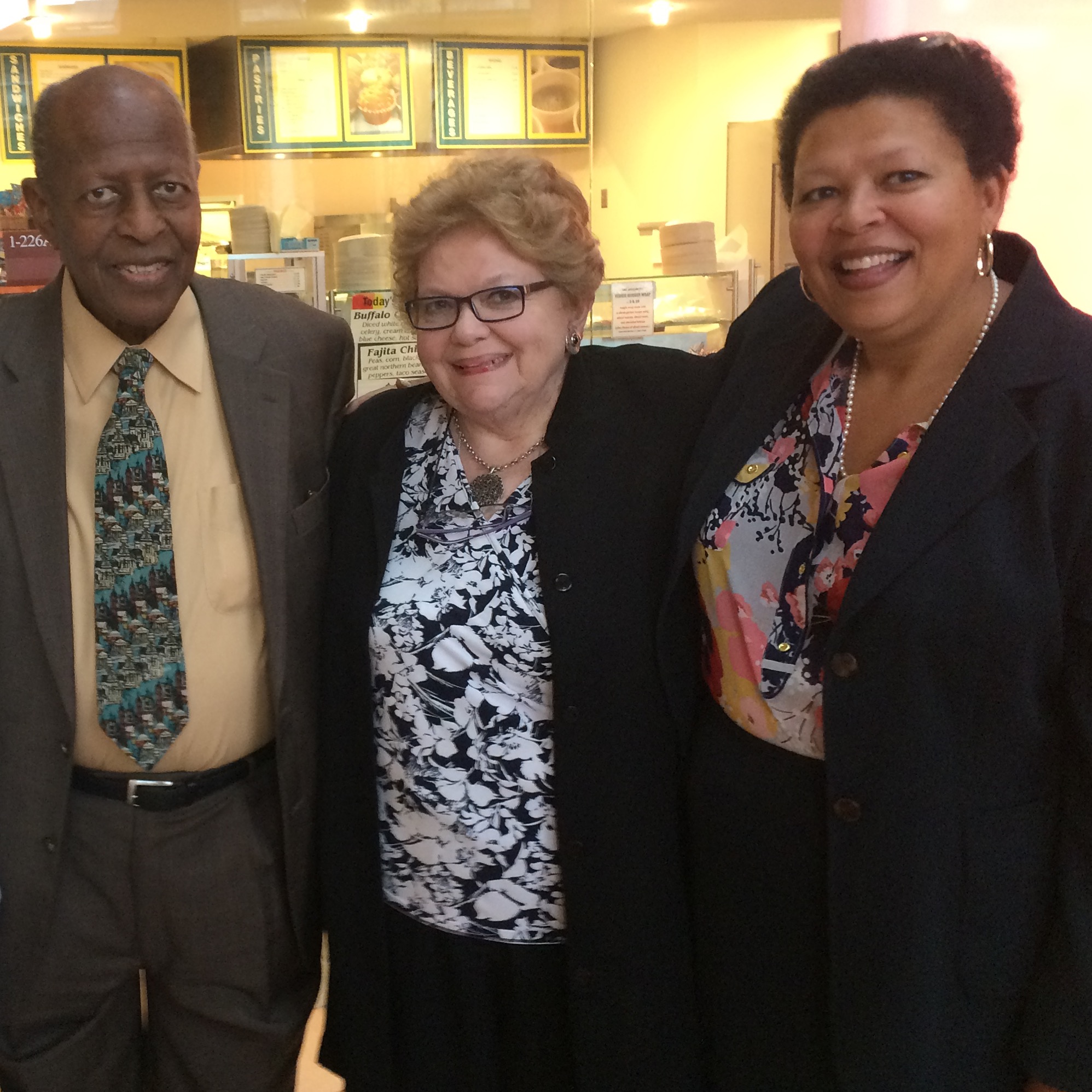 After that speech, Mary Sue recalled, the Willies escorted King back to Syracuse Hancock Airport. As he waited for his plane, King looked at Mary Sue and gently asked if she was pregnant, then leaned over and gave her a kiss. The Willies hadn’t realized it, but King was right.

Mary Sue would give birth to a son. His name is Martin.

The couple was in Syracuse for Tuesday’s “One University Awards” at Hendricks Chapel, an hourlong celebration of academic and civic accomplishments. There was a spontaneous and passionate response to Willie, 89, when he received the chancellor’s Lifetime Achievement Award.

During a quarter-century of study, teaching and administration at Syracuse, he served as chairman of sociology and a vice president for student affairs. He left for Harvard, continuing a career in which he wrote or edited more than 30 books and published more than 100 articles.

He also twice invited King, his old friend, to give speeches in Syracuse. King offered a resonant warning, another prophecy, about the generational damage that would be done if Northern cities failed to integrate their schools. When a tape of the 1965 speech was finally discovered two years ago—including Willie’s powerful introduction, and his vow to name a son after King—Mary Sue turned it into a CD, and sent it out with their Christmas cards.

Tuesday, when Willie walked to the front of Hendricks to be honored by Chancellor Kent Syverud, he offered a thought that brought reverent laughter from the crowd:

“You live long enough,” Willie said, “and something good’s going to happen.”

His presence was electric. The audience rose in long and sustained applause.

The reception left Willie recalling his career at the University. He brought up the moment in 1970 when he heard out the concerns of the “Syracuse Eight,” a group of African-American football players who refused to play until the team made changes to promote racial equality.

Willie-LeBreton said it was all part of her father’s quiet dedication as vice president of student affairs. She remembers his patient concern when the phone would ring, late at night, calls often informing him of students in crisis situations.

“My dad was here during some rocky times,” said Willie-LeBreton, a sociologist who said she was inspired by her father. Both Mary Sue Willie and her daughter remembered a campus protest in May 1970, when upset students took over the administration building.

They locked the door to prevent authorities from getting in, so Willie and Syracuse Police Chief Thomas Sardino entered through a window. They spent hours talking to the students, helping to defuse the situation without violence.

Mary Sue laughed. She said one student told her husband he’d never spent so much time with a professor in his life.

It all went back to a style Willie-LeBreton said her parents modeled at home: “They knew conflict didn’t have to be a stopping point,” she said. They were listeners who’d learned through their own experience how to deal with cruelty and thoughtlessness.

Chuck Willie is African-American. Mary Sue Willie is white. They met in the choir at Grace Episcopal, after Mary Sue showed up to sing as a favor for a friend, the director of the choir. Mary Sue said she was quickly drawn to Willie’s kindness and integrity. They were married in 1962, at Riverside Church in New York City.

Their love was an act of courage. At the time, interracial marriage was still outlawed in many states, Mary Sue said. What is commonplace today could be volatile then. There were still states in the South they could not venture into as a couple.

Mary Sue said her husband had a simple response: He believed in grace, in dignity, “that you don’t meet stares with an angry look.”

They persevered as the culture gradually caught up to them. They raised three children, Sarah, Martin and James, who did his graduate work at the Maxwell School of Citizenship and Public Affairs. Willie established himself as a skilled writer and a powerful speaker, a gift he shared with King: Mary Sue said they were both inspired by Benjamin Mays, a legendary minister and educator who was president of Morehouse during their college days.

It becomes impossible to forget, upon speaking with Willie, just how young King was when he was killed. Born in 1929, King was more than a year younger than Willie, his college friend.

As for Willie, he went on to a distinguished career in sociology at Harvard, where he maintains an office as a professor emeritus. Still, he clearly found deep meaning in his return to Syracuse. In a written message this week, he reflected on how the University is “where I made thousands of friends and learned hundreds of lessons about reform and rebellion, redemption and reconciliation.”

He was raised in Texas, during a time of harsh Jim Crow segregation. Education was his means of ascent, his best chance at equality. It would bring him to Syracuse University, where he spent 25 years. During a time of vast American change, he would meet his wife, start a family and launch an unforgettable career.

Syracuse, said Mary Sue, “is where he really feels that he grew up.”

After the awards, at a reception, the Willies settled in at a table to accept a stream of hugs and greetings. Cameron MacPherson, a senior football player whose academic achievements helped him earn a student-athlete award, was among those who made a point of shaking Willie’s hand.

MacPherson told Willie, “This is a better place because of you,” eight words that were another way of saying: