McNair Research Symposium: In Honor of an Astronaut, a Path at Syracuse to Hope and Dreams 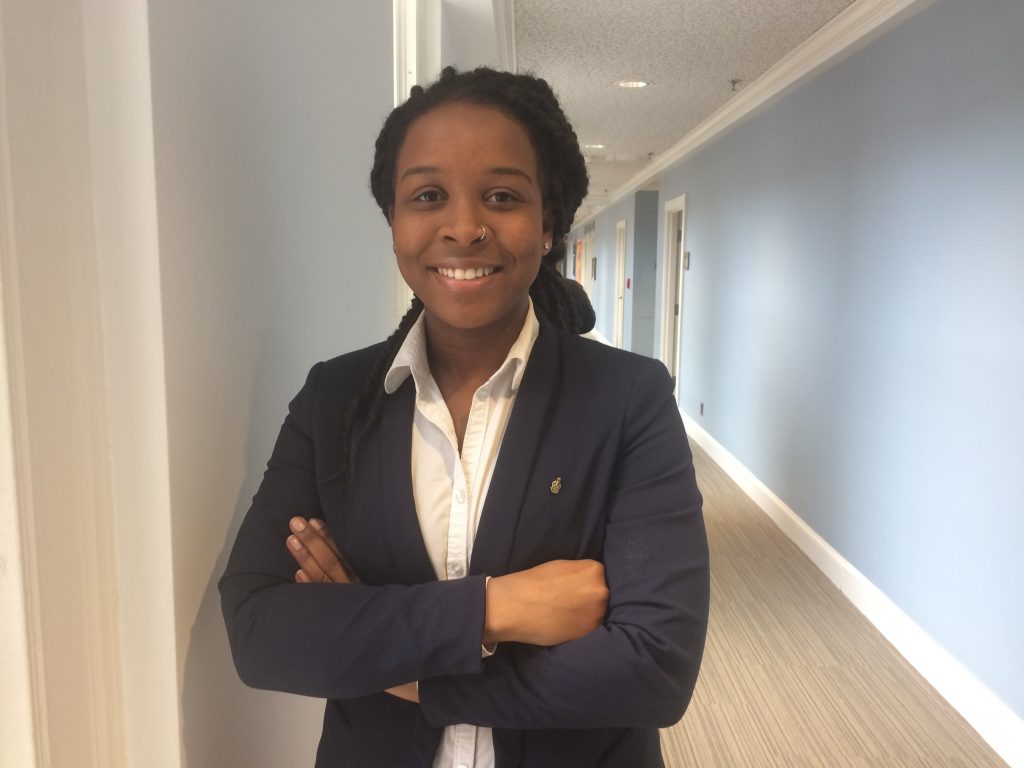 Ericka Jones-Craven grew up with a deep presence in the church. Jones-Craven’s father was an Apostolic elder. Her mother served as a missionary. Attending worship services was a regular part of Jones-Craven’s Georgia childhood.

That ended, at least for a while, when Jones-Craven arrived at Syracuse University. For the first time, with full control of her own schedule, Jones-Craven drifted away from the routine of the church. That decision initially seemed to be a burst of freedom.

Yet she gradually realized it left a void in her college experience. Jones-Craven became involved with the Black Celestial Choral Ensemble, a student gospel choir at Syracuse University. The music—and the deep friendships—now play a major role in the joy she finds at Syracuse.

“The church had been such a huge part of my life,” Jones-Craven says, “and I definitely missed it.”

That sense of absence led to her presentation at last week’s 2017 McNair Research Symposium, where about 25 students gave summaries of their projects for the Ronald E. McNair Post-Baccalaureate Achievement Program. The effort is part of a federal TRIO program named for Ronald McNair, an American astronaut killed in the 1986 explosion of the space shuttle Challenger.

McNair was the second African-American astronaut to travel in space. He also earned a Ph.D., at 26, in laser physics. Lauren Malloy, McNair program coordinator at Syracuse, says the initiative is intended to support and instruct ambitious young women and men from struggling and marginalized communities, students with the vision and potential to go on to graduate studies.

In many instances, particularly for young people in the first generation to attend college, that kind of future might not seem to be a practical reality. The whole emphasis of the effort, inspired by McNair, is providing students with a greater chance of fully appreciating and pursuing scholarly opportunities.

“We want to help them achieve their goals, to go to a level they might not have believed they can reach,” Malloy says.

This year’s projects represent a wide expanse of academic curiosity. The summaries included such topics as the impact of preschool philosophies on the way children acquire language and literacy; whether sex education in high school affected the behavior of African-American students at Syracuse; and an exploration of identity among Dominican women who are choosing to embrace their natural hair.

Jones-Craven, 22, called her project “Let it be,” and described it as an examination of traditional gospel values. She set up four speakers in a gallery space at the Shaffer Art Building, and began playing “Total Praise,” a gospel recording made by the Black Celestial Choral Ensemble.

She watched the reactions of students who unexpectedly came upon her presentation, then asked them a series of questions regarding their response. Jones-Craven wanted to know if the music triggered a comforting feeling and made them feel welcome.

She asked whether they consider themselves spiritual, religious, neither ….

The most common answer: About 36 percent of the students described themselves as “spiritual,” even if many no longer attend traditional services. That both matched Jones-Craven’s own experience and seemed to fit larger cultural trends. As one young man told her: “I don’t look outside of my mind to see spirituality. It’s within me.”

Jones-Craven, who has a double major in art photography and religion, describes the McNair program as life-changing. One of the goals for each student is seeking out a mentor. Marcia Robinson, a professor in the Department of Religion, has become such an important influence that Jones-Craven describes her as “a second mother. She’s always pushing me to do more.”

Her confidence during the presentation was another benefit. “I grew up as kind of a shy kid,” Jones-Craven says. “It was hard to break out of that shell, but this has really helped prepare me to be a professional, to be a scholar.”

Hatou Camara, 21, a senior majoring in anthropology and citizenship and civic engagement, went into city neighborhoods to frame the questions for her presentation. She calls the project “Where are you really from? Exploring modes of integration and negotiation of cultural identity among emerging adult refugees in Syracuse.” 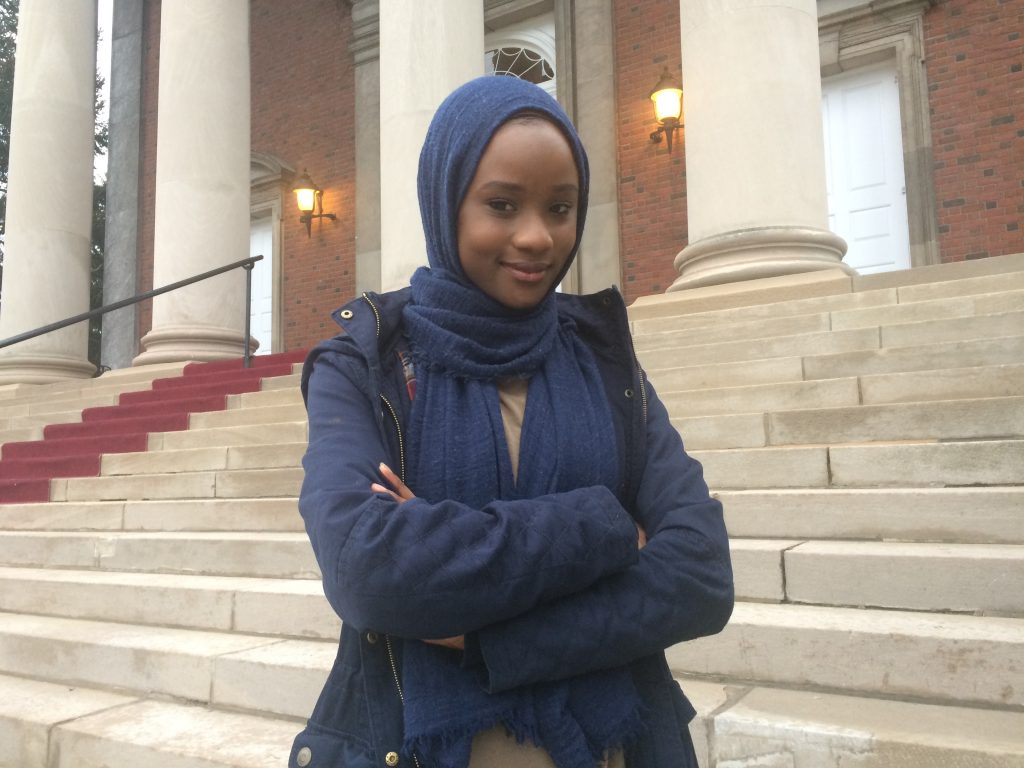 Camara’s parents were born in The Gambia. Their children grew up in New York City, in a Bronx neighborhood that attracted many immigrants. Camara has witnessed the struggles faced by newcomers once they arrive, “all the people who make you feel as if you don’t belong.”

She says questions of cultural identity have only intensified during the Trump presidency. Camara decided to make those issues the focus of her work within McNair. Through her research, she learned that Syracuse, as of 2012, had a refugee community of 12,000 people.

It is important, she says, for students to understand neighborhoods beyond the campus. Camara traveled several times to the North Side Learning Center, which provides services in Syracuse for immigrants and refugees. Building on those connections, she found a group of young men and women willing to speak about the way they see themselves, about whether their goal is meshing with the larger culture, hanging onto their cultural identities …..

Or walking a tightrope, between the two.

One young man told Camara that he lost several relatives to violence in his homeland. To sacrifice his culture, he maintained, would represent turning his back on them. A young woman spoke of how being seen as an outsider often is not truly her choice: She recalled a potential employer who acted skeptical that she was an American citizen, and demanded proof.

The young woman went home and picked up the documentation—then told her interviewer she didn’t want the job.

Camara says her parents left a farming community in The Gambia to come to New York. They raised their children—including Camara’s older sister, Kujegi, a Princeton graduate—on the assumption and belief they could succeed in college.

Since early childhood, Camara has understood the tangled road and contradictions of assimilation. Her own history provided a bedrock for her research, and her point in the end is a fundamental one:

Many families arrive here “coming from a life of hardship in refugee camps,” Camara says. Almost immediately, they face the challenge of learning to live separate lives, in different worlds. The McNair initiative gives Camara a chance to test her gut beliefs and observations against her own research, and then to shape a larger scholarly response.

Jones-Craven, who expects to eventually attend graduate school, also sees the program as a revelation.

“I never really thought that I’d be doing this kind of research,” she says. “But I love learning, and McNair has helped me in a lot of creative endeavors. It really offers a platform if you want to learn.”