Share
College of Engineering and Computer SciencePhilanthropyWhitman School of Management 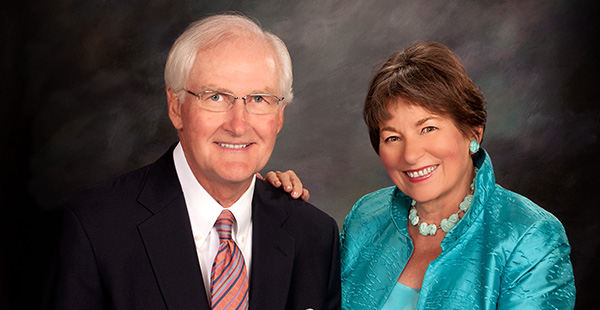 A major gift from University Trustee John Riley ’61 and his wife, Diane, will establish a new dual degree program that allows Syracuse University students to earn both an MBA from the Whitman School and a bachelor’s degree from the College of Engineering and Computer Science in just five years.

Longtime supporters of the University, the couple have endowed the H. John and Diane M. Riley Dual Engineering/MBA Program, which blends the rigorous challenges of an engineering degree with the demands of a theoretical and highly experiential MBA program to develop world-class leaders.

Through his service as a trustee and member of the Board’s Student Affairs Committee—and his experience at the helm of and on the boards of large corporations—John Riley has kept a watchful eye for ways the University can empower students and fill needs in the marketplace.

“Diane and I put careful thought into our charitable gifts,” John says. “The same is true of our support of the engineering/MBA program, which provides an interdisciplinary education that we believe will distinguish graduates in the marketplace. I would say there are few engineering graduates who spend their career doing only design. Perhaps they manage projects, help with business development or start their own firm. Whatever the case, having technical skills and business training will prepare them to make an immediate impact on any organization. We are happy to support this program and look forward to learning of its graduates’ success for years to come.”

Chancellor Kent Syverud believes that as a result of the Rileys’ vision and generosity, Syracuse University is further positioned to attract the country’s highest-caliber students.

“John and Diane have made their own unique mark on Syracuse University in so many different ways,” says Chancellor Syverud. “They ensure the University has the vision, resources and guidance needed to continue to grow and evolve along with the needs of our students, our campus community and the world. As we continue building on our efforts to enroll and retain the best and brightest students, this kind of philanthropic support is critical.”

A philosophy of giving is rooted in personal experience for John, a Syracuse native, who knows firsthand how an opportunity can change one’s life.

Though no one in John’s family had gone to college before him, there was never a doubt he would. He finished at the top of his high school graduating class and was accepted to Syracuse University. The hurdle left to clear was cost. The help he needed would come in the form of a scholarship from the The Gifford Foundation, a private foundation dedicated to enhancing the quality of life for the people of Central New York.

After four years of riding the city bus from his parents’ home on Syracuse’s North Side to campus and back, John earned a degree in industrial engineering. He took a position in the manufacturing training program at General Electric (GE) after graduation. From there, he ascended the corporate ladder from general manager to vice president, president, chief operating officer and, finally, chairman of a $5 billion manufacturing company.

John readily acknowledges the opportunity that his scholarship provided and is quick to credit his Syracuse University education as integral to his accomplished career. “I was fortunate to have had the door of opportunity opened for me by The Gifford Foundation,” John shares. “The value of my degree cannot be overstated. It has always been my goal to give back, and the education I received from Syracuse helped me achieve the success to do so.”

The first step toward that success came soon after crossing the Commencement stage, when John entered the GE training program in Syracuse. He would move to Iowa and Ohio before the program brought him back home to Central New York. Though he and Diane grew up 10 blocks from one another, they began dating just before John graduated from Syracuse. They were married in 1963 after he returned to Syracuse with GE.

John left GE for a position with Crouse-Hinds, a Syracuse-based electrical products manufacturer, that kept the couple in Syracuse another 10 years. During that time, they became parents to a daughter, Beth, and two sons, Thomas and Patrick ’90 (Newhouse), who have given them seven grandchildren.

In 1974, Crouse-Hinds purchased the Chicago-based Midwest Electric Manufacturing Co. John was offered the role of vice president and general manager of the new acquisition. Four years later, the Riley family would move again when John was needed to take the helm of another acquisition in Charlottesville, Virginia.

When Crouse-Hinds was bought by Cooper Industries (a Fortune 500 oil field products, tools and hardware company) in 1982, the Riley family would make one last move for John’s career. This time, Houston would be their home, and John would be head of Cooper’s newly acquired electrical business. By 1992, he had become president and chief operating officer of Cooper Industries and was named CEO and chairman of the board in 1996. At the time of John’s retirement in 2006, the company employed more than 25,000 people at 100 locations around the world.

In addition to his leadership at Cooper, John has provided valuable counsel as a board member of major corporations—including Baker Hughes Inc., Allstate Corp. and Westlake Chemical Corp.—and served as chairman of the National Electrical Manufacturing Association. A recognized leader in the electrical manufacturing industry, he was awarded lifetime achievement awards by the National Association of Electrical Distributors and The Edison Electrical Institute.

Just as John gives credit to Syracuse University for its role in his fruitful career, he points to Diane as the true underpinning of his success. “I have been very fortune to have the support of my wife and family,” John says. “From day one, Diane made everything work so that I could focus on my career. She was an incredible CEO’s wife, and is well known in Houston as a dedicated community servant and leader. She has received distinguished recognitions for countless hours of fundraising and volunteering for numerous organizations. I am as proud of Diane as I am grateful. We are partners in every sense.”

The power of their partnership is evident through the work of the H. John and Diane M. Riley Family Fund. Though the fund itself was created in 2006 upon John’s retirement, the Rileys have long been generous with their time and financial contributions to organizations whose missions are important to them. Their family fund was established to continue their efforts to support education, health, welfare and civic improvement.

“For us, it’s about providing opportunities—helping pave a path forward for individuals who are committed to a goal and are willing to work hard to achieve it,” John says.

The Rileys have chaired major fundraising activities for the United Negro College Fund, the Houston Grand Opera and Ronald McDonald House/Houston, among others. They have given generously to a number of nonprofits, such as the Women’s Home, the Baylor Breast Center, The Museum of Fine Arts, Junior Achievement and the Cardinals Circle for Inner City Education. Syracuse University is also a beneficiary of the Rileys’ generosity, and John has served his beloved alma mater by sharing his time and experienced perspective as a member of the Board of Trustees.

John and Diane have been deliberate in planning gifts to Syracuse University in a way as to enrich and strengthen the student learning experience. Among the first to recognize the need for a new home for the University’s School of Management, they endowed a classroom in the state-of-the-art building, which has helped raise the school’s prominence and its ability to prepare future business leaders.

For their most recent gift, the Rileys worked with many representatives at the University to craft plans for the dual engineering/MBA program.

Teresa Dahlberg, dean of the College of Engineering and Computer Science, is grateful for the Rileys’ support and shares the sentiment that an engineering education and business degree are highly desirable as a combined force in industry. “There’s a common misconception that the work of engineers and computer scientists takes place far removed from the business development offices and C-suites of industry,” she explains. “In reality, business and technology are more intertwined than ever before. The H. John and Diane M. Riley Dual Engineering/MBA Program is a shining example of SU’s great ability to produce graduates who understand multiple disciplines and how they align. The Rileys’ generosity translates to real-world success for our students, and we are tremendously grateful.”

This gift by the Rileys exemplifies their enduring desire to provide transformative opportunities for those who work for them. “The Rileys’ support enables Whitman and the College of Engineering and Computer Science to attract high-achieving students and help them complete both degrees in a relatively short timeframe, minimizing the financial impact to the student,” says Whitman Associate Dean of Graduate Programs Don Harter. “The success and growth of the dual engineering/MBA program is due directly to the Rileys’ commitment to giving deserving students an exceptional, interdisciplinary education that will position them to advance to leadership roles early in their careers.”