The Syrian Accountability Project, an initiative at Syracuse College of Law, is unveiling new evidence that the catastrophic gas attack on the Syrian town of Khan Sheikhoun was a crime against humanity and a war crime.

The 45-member organization, staffed by College of Law students and led by Professor David Crane, a former war crimes prosecutor, has released its latest white paper, “Idlib Left Breathless: A Report on the Chemical Attack in Khan Sheikhoun.” 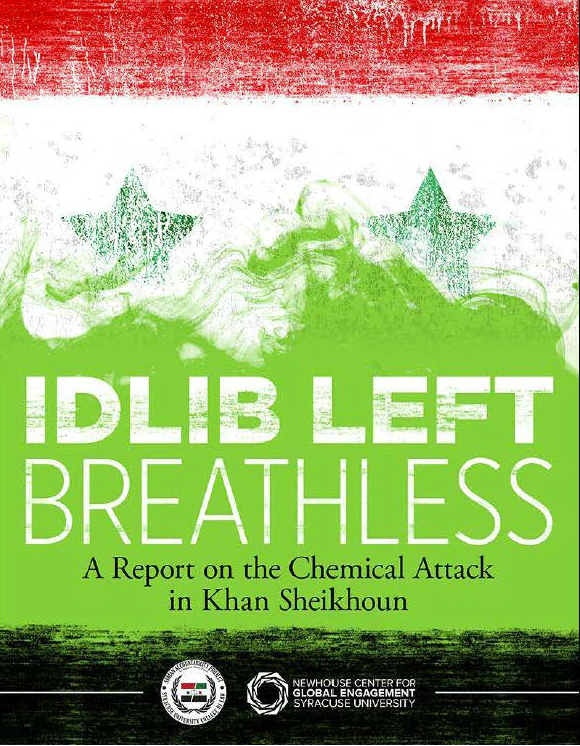 The paper details the April 4, 2017, attack that killed at least 87 people and injured more than 500. The paper offers compelling evidence that the gas used in the attack was the nerve agent sarin, one of the most potent and fast-acting chemical weapons, banned under international law ever since the 1993 Chemical Weapons Convention.

“This white paper continues the Syrian Accountability Project’s careful analysis of war crimes and crimes against humanity that have been committed by all sides during the six-year-long Syrian Civil War, a list of horrors that beyond the use of chemical weapons also includes the torture of prisoners, siege of cities, denial of humanitarian aid, rape and deliberate targeting of civilian populations,” says Crane. “Our aim is to provide future prosecutors with a database of evidence that will help the Syrian people seek justice for these crimes after the war concludes. To this end, we will send this and other analyses to the newly created United Nations Syrian Accountability Center, which was formed with my help in December 2016.”

The white paper’s sources include first-hand accounts of the chemical attack, subsequent news reports from both local and international news agencies, and other open-source materials. The Syrian government denies that it launched the attack.

The chemical attack happened at 6 a.m. on April 4 when two or three aerial strikes occurred on the town of Khan Sheikhoun, located in northwestern Syria, a stronghold of anti-Assad forces. People reported choking and gasping for air, and first responders reported people lying on the ground and convulsing, symptoms that are consistent with the use of a nerve agent such as sarin.

Specifically, sarin gas targets a body’s neurotransmitters, and even in small doses it can quickly cause respiratory failure due to lung paralysis. Unlike chlorine gas, a powerful irritant that also has been reportedly used during the Syrian Civil War, sarin is lethal even when dispersed outdoors. Images from the attack, including the deaths of young children, shocked the world, and they were the catalyst for the United States government to reverse its current policy toward directly targeting the Assad Regime by launching 59 missiles on April 7 at the Syrian air force base where the attack was unleashed.

This is not the first white paper detailing crimes against humanity and war crimes by the Syrian Accountability Project. In 2016, the project released the groundbreaking “Looking Through the Window Darkly, a Snapshot Analysis of Rape in Syria, 2011-2015,” which analyzed 142 sexual crimes perpetrated by all sides in the Syrian Civil War and which revealed that the Syrian Regime perpetrated 62 percent of the total incidents.