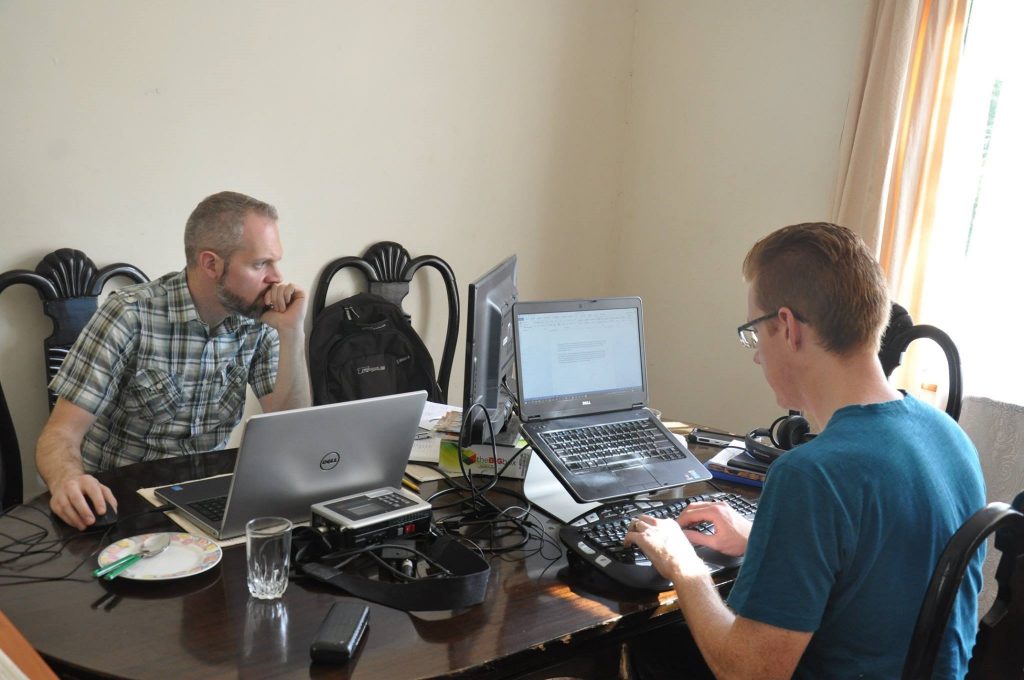 Last year, Christopher Green, assistant professor of linguistics, spent a month in Kenya with colleagues at Kenyatta University and members of the Luyia ethnic group to continue to explore and better understand the richness of their languages.

Green spent many hours a day recording speakers of the Wanga language to listen for various distinctions, such as the use and tone of verbs in sentence constructions; processed data; and also co-taught a field methods course at the university. “It was an intense monthlong trip,” Green says.

The research continues at Syracuse as he and a group of research students study the recordings from his time there and also from recordings that have been made since Green left Kenya. Trained consultants in Kenya continue to provide additional recordings, sent via the internet.

This thorough, detailed work is funded as part of a larger effort to study four specific dialects—including Wanga—of the many Luyia languages, a cluster of Bantu languages in Kenya and Uganda. Green is co-principal investigator of a multi-university, four-year, $475,000 National Science Foundation grant that will create documentation on the properties—tonology and syntax—of the specific Luyia languages.

“It’s one of many different languages of Kenya but it is losing ground to Swahili and English,” says Green, who joined the Department of Languages, Literatures and Linguistics in the College of Arts and Sciences last fall. “It’s still fairly robust, but it could be threatened by encroachment of the more widely used languages.”

The collaborators—who also include co-principal investigators Michael Marlo, associate professor of English at the University of Missouri-Columbia, and Michael Diercks, associate professor at Pomona College—will produce the first comprehensive descriptions and formal analyses of four underdocumented varieties of Luyia: Bukusu, Logoori, Tiriki and Wanga. Under the NSF funding, monographs will be developed for each language and include a grammatical outline, a detailed description of the tonal system, in-depth studies in syntax, a collection of texts and a dictionary.

Green, who focuses most of his research on African languages, first became interested in Luyia languages, specifically the Wanga language, when he was a graduate student and is one of only a few people who has published research on the language.

With his specialty, and that of the other collaborators, the application for the NSF funding came together as a way to survey several of the languages.

“The African linguistics community is fairly small. Michael Marlo and I are phonologists, and Michael Diercks is a syntactician. And then we have several other colleagues as collaborators,” Green says. “We represent pretty much everyone who has worked on this small group of languages, and the three of us decided to put together a collaborative proposal.” 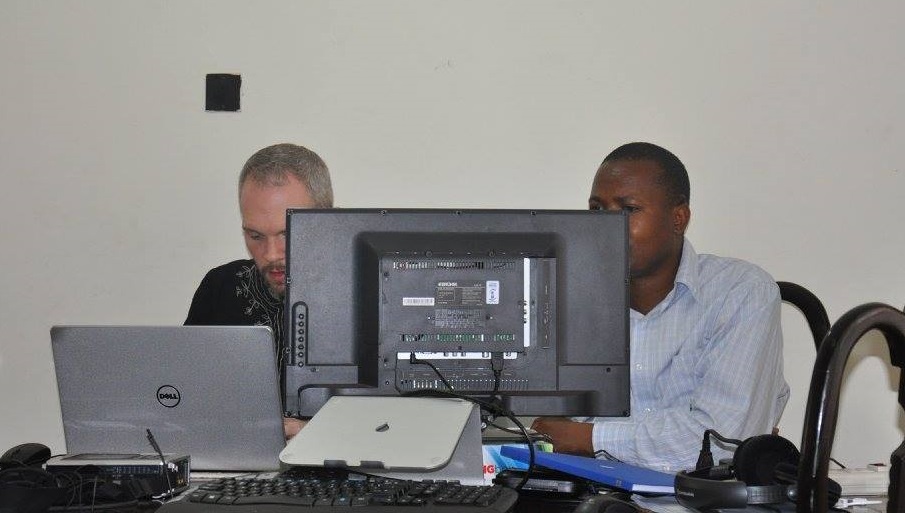 Assistant Professor Christopher Green, at left, worked with colleagues in Kenya on processing data on the Wanga language.

Colleagues at universities in Kenya were also brought on board. “Our individual expertise made it a stronger proposal,” Green says.

Green, who is a research affiliate at Kenyatta University and co-presented on the work with Marlo at the Mother Tongue Languages Conference at the University of Nairobi, explains Luyia is the macro language for a cluster of between 20-25 languages. “They share similar features and are mutually intelligible, but grammatically are quite different in their tonology,” Green says. “We all help out with all the languages, looking at what the others are writing and doing data collection. While in Kenya, I was also collecting other languages.”

In examining tonology—the contrast or use of relative pitch to signal different meanings—of Wanga, “you might have a particular pattern of high tones or pitches that are characteristic of verb context,” Green says. “There might be a high tone on the first syllable in one verb tense and in the far future a high tone on the third syllable. Tones show some difference in the word itself and vary in grammatical context. It’s about figuring how they interact with one another.”

Green explains that all languages use these cues of pitch. “In English, we use pitch to indicate making a declarative sentence or ask a question,” he says. “Other languages use pitch to give a word a different meaning. Those are two extremes; Wanga is somewhere in the middle.”

In Wanga, the use of pitch is in some instances attached to some kind of word meaning, but mostly it’s for grammatical purposes. “There is a finer grain context, for tense, such as right now and continuously, and then two days from now. That’s a lot of what we’re figuring out—how tonal melodies make differentiations.”

Under the project, Green has two main goals: the development of a monograph that discusses the tonal system of Wanga—specifically verbs and nouns, understanding the relationship between lexical tones and grammatical tones and how they influence one another in different contexts, in individual isolation or in noun or verb phrases—for example, “I kicked the ball quickly” vs. “I kicked the ball.”

Another less detailed portion of the work is creating a grammatical sketch for language. A smaller project is an electronic dictionary. 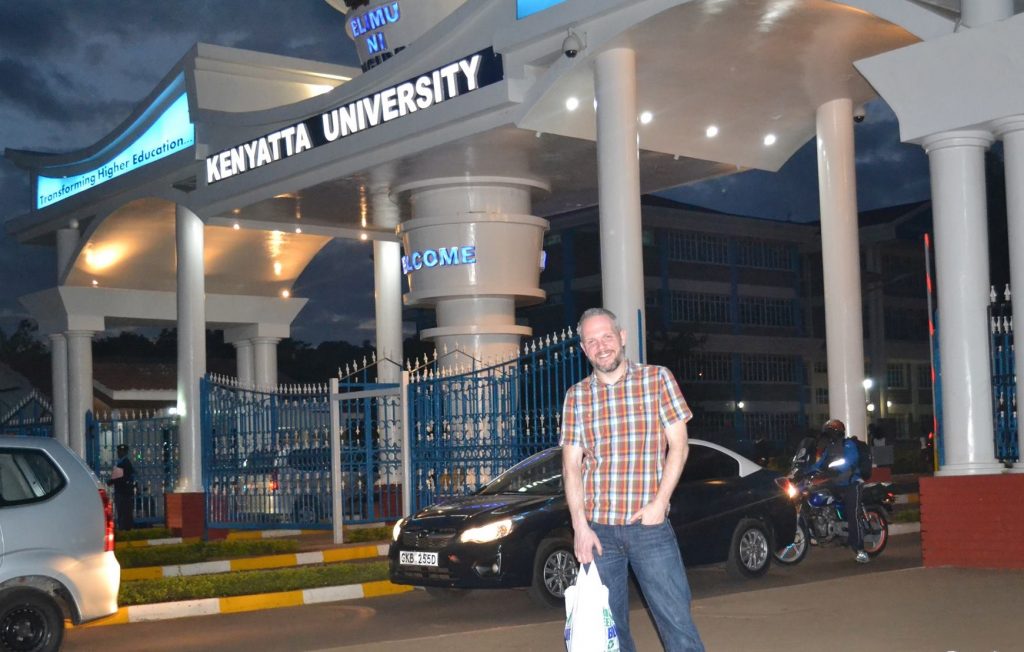 At Syracuse, Green established a working group to assist with assessing the data. “Two undergraduates and two graduates are processing the data from questionnaires and listening to recordings to contribute to the publications we’re writing,” he says.

[Other students interested in exploring these languages and linguistics research will have an opportunity this summer to participate in the Linguistics Boot Camp, a synchronous online course, through University College, which has been funded through the college’s Innovation Fund. (See related story.)]

“What we have discovered was that there are eight patterns, and within those some have subpatterns,” Green says. “The diversity of the system has been fascinating.”

Although the work’s primary focus is scientific, “what we’d like to do is create these materials that are available for individuals in Kenya who are either Luyia speakers or would like to study their own languages,” Green says. “We will provide these as open-source materials, and we’ve been doing a lot of collection of narratives that can be digitally stored.”