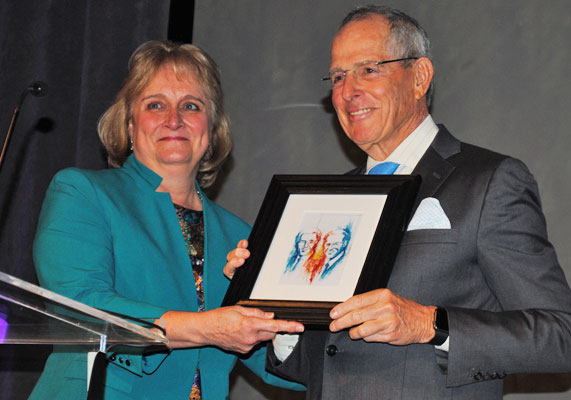 Marvin Lender ’63 has many wonderful memories about his family’s bagel bakery while growing up.

Lender remembers the times he would stand at a bench making bagels by hand—a skill that could take up to a year to learn—in the 400-square-foot backyard garage, set up as a small bakery at his family’s home in New Haven, Connecticut. On Sunday mornings, he and his brother, Murray, would get up at 3 a.m. to deliver bagels to stores before they opened.

“There are tons of memories, but the thing that sticks out in my head is when I wanted to see my father [Harry] after school I would go into the garage and spend time talking with him and watching him work at the oven,” Marvin Lender says.

The business was a small operation, a handful of dedicated workers, both family and non-family employees. That small business and the values of a hard-working father committed to manufacturing a high-quality product inspired his sons to achieve something their father could never have imagined.

Harry Lender’s original New York Bagel Bakery became Lender’s Bagel Bakery in 1965. It was a company that brought a traditionally ethnic food product to American households everywhere, utilizing the advancement of freezing technology. The brothers sold the company in 1984 to Kraft Foods. 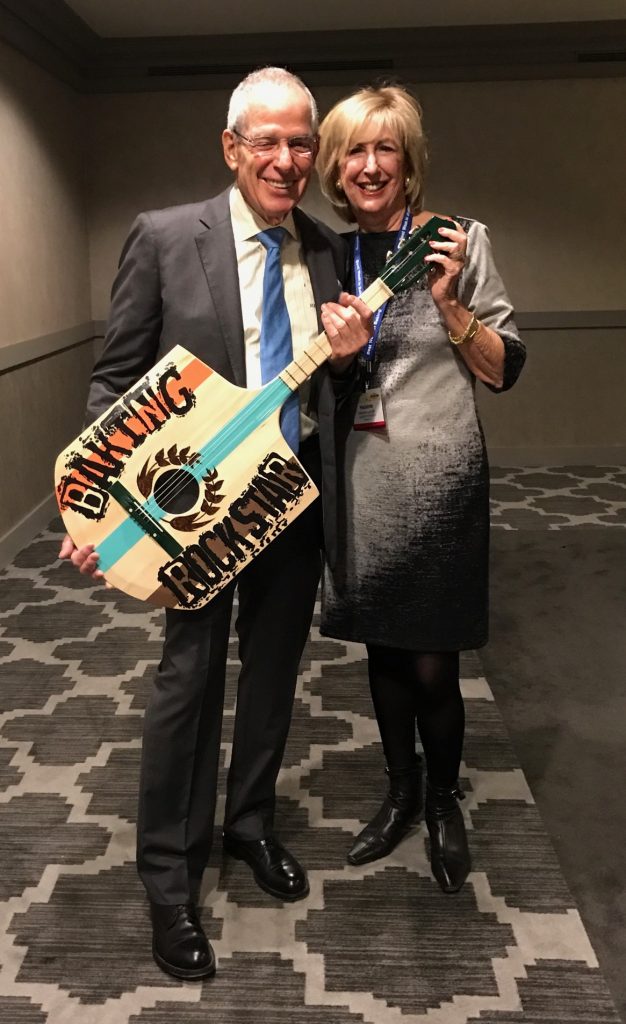 Marvin and Helaine Lender at the Baking Hall of Fame event

Although out of the bakery business for many years, Marvin Lender and his brother, Murray, who passed away in 2012, were recognized recently for their entrepreneurship and philanthropy—and their bagel baking—by the American Society of Baking, based in Kansas. Having been nominated by former employees, they were inducted into the Baking Hall of Fame at the society’s annual meeting in Chicago in February.

“We did what we did because that’s how we worked, and so being recognized, at this point in my life, has been just an incredible experience,” says Marvin Lender, who noted it was an exciting moment to receive the award surrounded by many members of his family.

“One of the reasons that we were successful was because we had such a strong workforce,” Lender says. “We were incredibly committed to our people, and they in return were committed to us. We were never anything other than ‘Murray’ and ‘Marvin,’ and everyone was an extended part of the family.”

The business began in 1929, two years after Harry Lender arrived from Poland. During those two years, Harry had earned enough money to bring his wife and three children (three other siblings would be born in America) to the United States and buy a family home with an attached garage, which was utilized as a bakery.

Eventually, Harry was joined by Murray and another son, Sam, along with two employees, to hand-roll bagels seven days a week. Marvin joined the business in 1963 after graduating with a political science degree from the College of Arts and Sciences and the Maxwell School. Harry had passed away in 1960, so it was just the three brothers and then four employees. Sam retired a few years later, and Murray and Marvin continued to grow the business.

“The vision was characterized in something Murray said to me and then to the public, which was that it was our intent to ‘bagelize America.’ When this all started, the only people who were eating bagels were Jewish consumers,” Lender says. “It was pretty clear to us that if we were to build a business, we had to create a market. If we created the market and built the business, we had to create the ability to manufacture the product on a large-scale basis.” 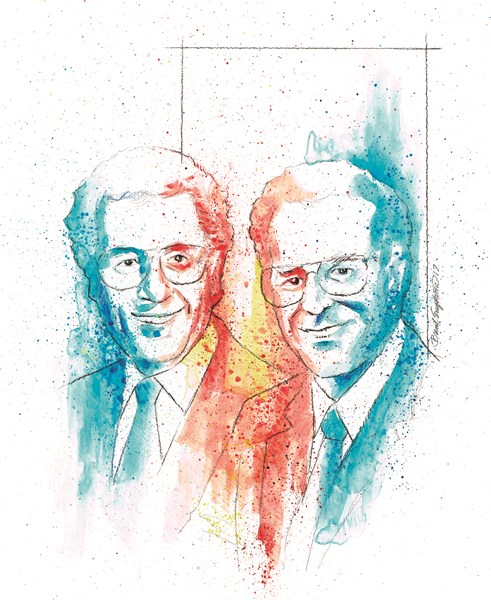 Marvin and Murray Lender. Courtesy of American Society of Baking.

Murray was the creative marketing and ideas person, working on sales and marketing. Marvin handled operations, employee relations, banking and legal, among other responsibilities.

“Our success was really a function of our friendship, our relationship as brothers, and an enormous amount of trust and respect we had for one another,” Lender says.

They looked to automation to increase production and the use of the freezing process—bagels that could be defrosted by a consumer would be only two hours old from when they were baked and frozen.

In terms of marketing, Murray came up with ideas that went beyond traditional advertising. “My brother was probably one of the most creative people that I’ve ever met; he was really brilliant,” Lender says. He sold other companies, such as General Foods, Kraft Foods and Smuckers, to name a few, on the idea of cross-couponing. These businesses would display Lender’s coupons on their products, and Lender’s would carry their branded items on the Lender’s bag. They also advertised on “The Tonight Show” with Johnny Carson, which, at the time, was quite aggressive given the fact that the brothers had few financial resources available.

While Murray was dreaming up ways to sell bagels, Marvin worked on maintaining and improving the quality of the product, creating innovative designs for machinery and methods of transportation to reach all areas of the country. He decided to put the bagels in a specific type of plastic bag, which protected the product after freezing, and also eliminated preservatives. The company also began preslicing their bagels and expanded the product line by adding various flavors, such as cinnamon raisin.

“Being an entrepreneur is this notion of taking a risk and clearly we were willing to do that,” Lender says.

The company that started with seven people, including the three Lender brothers, grew to 700 people in plants at multiple locations. 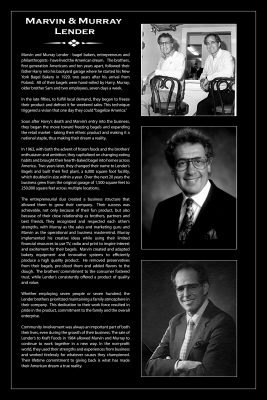 Plaque of Marvin and Murray Lender for the Baking Hall of Fame. Courtesy of American Society of Baking.

“If my father had not left that garage to us, we’d have nothing,” Lender says. “Inherent in our success in our lives was the understanding that we were pretty lucky guys in a fortunate family.”

His father came to America because of the rising tide of anti-Semitism across Europe and the political situation he saw developing. Many family members later died in the Holocaust.

“One of the values my father gave us was this notion of giving back—don’t take anything for granted,” Lender says.

After the sale of their company, both brothers became even more involved in philanthropic initiatives. Marvin worked with organizations to support the resettlement in Israel of Jewish peoples from Ethiopia and the former Soviet Union; has been committed to groups looking to advance peace between Israel and its neighbors; and has worked on initiatives to build better community relations in the United States.

A Life Trustee on the Syracuse University Board of Trustees, Marvin has provided support and leadership to the University, chairing “The Commitment to Learning” campaign that raised $380 million—the biggest prior campaign was $100 million.

“I believe that Syracuse gives you an education both in the classroom and outside the classroom that for me had an enormous impact on how I saw the world,” Lender says. “I will forever be indebted and grateful to this university for the opportunity it gave me.”

His loyalty runs deep with a recognition for what being at Syracuse did for him—“not the least of which is finding my wife [Helaine Gold ’65],” Lender says. The two met at Syracuse and married seven months after he graduated. The couple has a daughter, Heidi; a son, Keith; his wife, Jill, and their three children, Maya, Jaden and Dylan; and a daughter, Sondra ’93, her husband, Ben, and their two children, Ziggy and Marsden.

As they consider a lasting legacy, Marvin and Helaine Lender are working on a project with the University that deals with social justice. “Syracuse stands for so many of the things embedded in the notion of social justice and making the world a better place,” Marvin Lender says. “I know when we finish developing ‘The Lender Center’ it is going to be something we will be very pleased and proud of and so will our children, who will have the opportunity to be engaged. This legacy means a great deal to me and Helaine.” 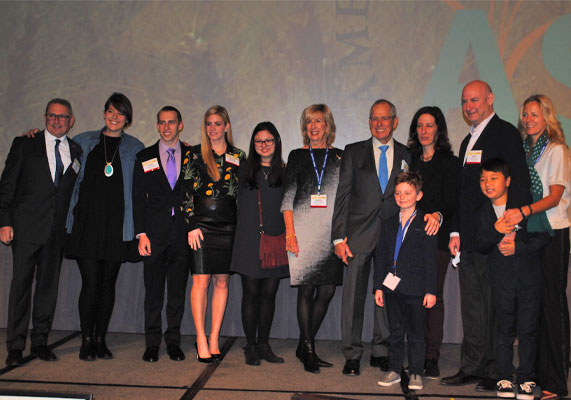 Family, employees and other supporters of Murray and Marvin Lender came to Chicago for the Baking Hall of Fame event. Photo courtesy of Sosland Publishing.