The Best of Brazilian Guitar Coming to Syracuse 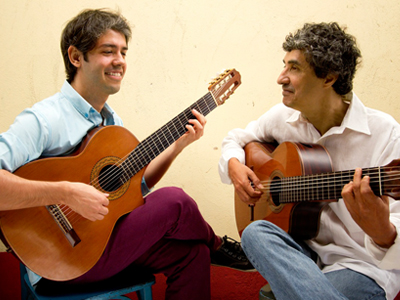 The Department of Art & Music Histories in the College of Arts and Sciences will present an evening concert featuring three pioneers of Brazilian guitar music—Ricardo Peixoto, Rogério Souza and Edinho Gerber—on Tuesday, April 4, at 7 p.m. in Slocum Auditorium (214 Slocum Hall). The event is free and open to the public.

Originally from Rio de Janeiro, Bay Area guitarist and composer Ricardo Peixoto is among the top performers of Brazilian guitar in the United States today. His fluid melodic style and keen compositional sense reflects his country’s rich and diverse traditions. Over his long career Peixoto has recorded, performed and collaborated with some of Brazil’s most celebrated artists, including Claudia Villela, Flora Purim and Airto, Bud Shank, Sivuca, Toots Thielemans, Dori Caymmi and Guinga.

A master of both six- and seven-string guitars, Rogério Souzahas has performed around the world, showcasing his original works as well as a stunning classic repertoire. He has also worked as a producer with a multitude of world-class Brazilian musicians, including Baden Powell, Paulinho da Viola, Ney Matogrosso, João Bosco, Ivan Lins, Elizeth Cardoso, Dona Ivone Lara, Nelson Cavaquinho, Martinho da Vila and Zeca Pagodinho. Rogério performs regularly in music festivals and concerts throughout Latin America, Europe, the United States and Asia in addition to many master classes and workshops he teaches throughout the year. 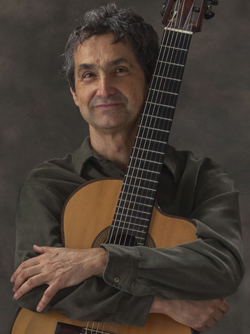 Having a Brazilian mother and an American father has gifted guitarist Edinho Gerber with a rich musical vocabulary developed in the two countries where he was raised. Navigating effortlessly between the genres of choro, jazz, samba and blues, he says he is always in search of the intersection points within his dual cultural identity.

A staple in the Chicago music scene for many years, Edinho has performed in prestigious venues throughout the United States, Russia and Japan, and currently resides in Rio de Janeiro, where he performs regularly with Souza in the celebrated collaboration Duo Violão Brasil.

The Brazilian guitar concert is organized by Silvia Lazo, instructor of music history and cultures, and is promoted by the students of the Music in Latin America course.

Check out the video below to see the three guitarists performing.