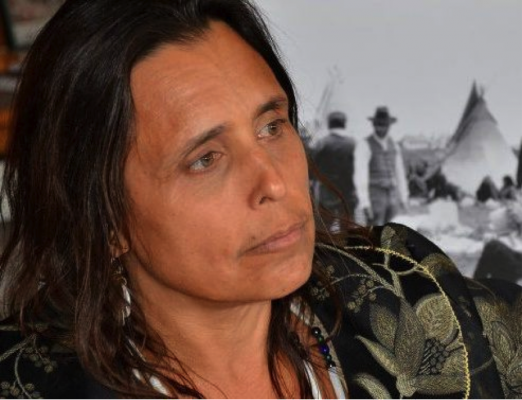 The Democratizing Knowledge (DK) Project in the College of Arts and Sciences is presenting “An Evening with Winona LaDuke” on Wednesday, March 29, at 5 p.m. in Shemin Auditorium. A leading environmentalist and political activist, LaDuke is revered for her work with food sovereignty, renewable energy, sustainable development and indigenous paradigms.

The program is free and open to the public. For more information, contact Hayley Cavino G’09, the DK Project’s program coordinator, at 315.443.8750 or hcavino@syr.edu.

The DK Project began exploring the possibility of LaDuke’s visit last fall. Many members of the project have admired her prolific scholarship and unwavering activism.

Cavino says her visit is timely, given growing concerns over climate change, renewable energy and indigenous values and rights.

“Particularly during last summer, these issues came into focus at Standing Rock [in North Dakota], with the Dakota Access Pipeline,” Cavino says.

LaDuke has written and lectured extensively about the conflict, calling it an “unpredicted history lesson for us all.” LaDuke resides on the White Earth Reservation in northwestern Minnesota. A two-time vice presidential candidate on Ralph Nader’s Green Party ticket, she is program director of Honor the Earth, raising awareness of and support for indigenous environmental justice, and is founder of the White Earth Land Recovery Project, one of the nation’s largest reservation-based, nonprofit organizations. She also works to protect indigenous plants and heritage foods from patenting and genetic engineering.

A prolific writer, LaDuke has authored six books, including the novel “Last Standing Woman” (Voyageur Press, 1999); has co-authored more than a dozen other titles; and has published dozens of essays and articles. She earned an M.A. degree at Antioch University.

“This is more than hosting a talk by Winona LaDuke, although the information will be incredibly and critically important,” Cavino adds. “This is about fostering relationships. At Syracuse, Winona will reconnect with people she has known for a long time—some of whom have lived here for generations; others, for a relatively short amount of time. She will also meet an array of new people, including students.”

Founded in 2009, the DK Project is a campuswide initiative that promotes a more open, inclusive and democratic institution. For more information, visit democratizingknowledge.syr.edu.