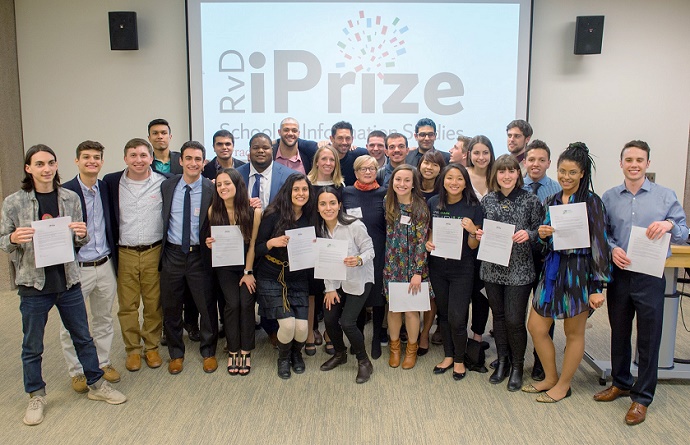 The winners were announced for the 2017 Compete CNY – iPrize competition, held March 24.

Open to all Central New York colleges and universities, Compete CNY was the regional qualifier for the 2017 New York State Business Plan Competition. Winners will advance to the statewide competition in Albany on April 28, and compete for a $100,000 statewide grand prize.

Syracuse University students also competed for the iPrize and the opportunity to win $40,000 provided by the iSchool through funding from the Raymond von Dran (RvD) Endowment Fund. The RvD Fund was established to honor the memory of the former iSchool dean, who helped students bring their ideas to life through the spirit of entrepreneurship. Gisela von Dran, his widow, helped award the prizes at this year’s event. She was joined by serial entrepreneur Wiley Cerilli, a former iSchool student who is co-founder of Good Uncle.

The New York Business Plan Competition is a statewide collegiate business plan competition, with participants from 70 public and private colleges and universities. Since 2010, more than 2,100 teams have pitched their ideas and ventures to venture capitalists, angel investors, investment bankers, other public and private investors and entrepreneurs. More than $2,300,000 in cash and in-kind prizes have been awarded throughout New York State. Learn more about the New York State Business Plan Competition here.