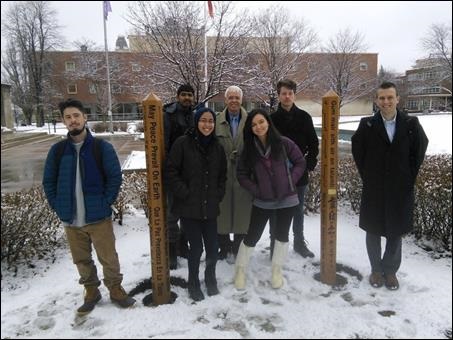 “May Peace Prevail on Earth.” A simple phrase with a powerful message.

The words—in 23 different languages and in Braille—are inscribed on two red cedar “peace poles” installed over winter break in front of Hendricks Chapel through the work of the student Spiritual Life Council.

For Madeleine Buckley ’18, a member of the Spiritual Life Council, the Peace Poles are a physical manifestation of what the council is all about and the shared vision of the various faiths.

“Being a part of the Spiritual Life Council has made me an incredibly strong supporter of and believer in the value of interfaith initiatives and conversations,” Buckley says. “However, while we do fantastic work, we sometimes struggle as a council to get our message out on campus because it is logistically difficult.”

The council can have at times frequent turnover, and its members work hard to bring a message of unity.

“There are many misconceptions surrounding different faiths that make it challenging to convey the power of interfaith cooperation in a quick and comprehensive way,” Buckley says.

So when the council’s advisor, Pagan Chaplain Mary Hudson, approached the council with the idea of a peace pole, Buckley and her follow council members thought it was a fitting idea. 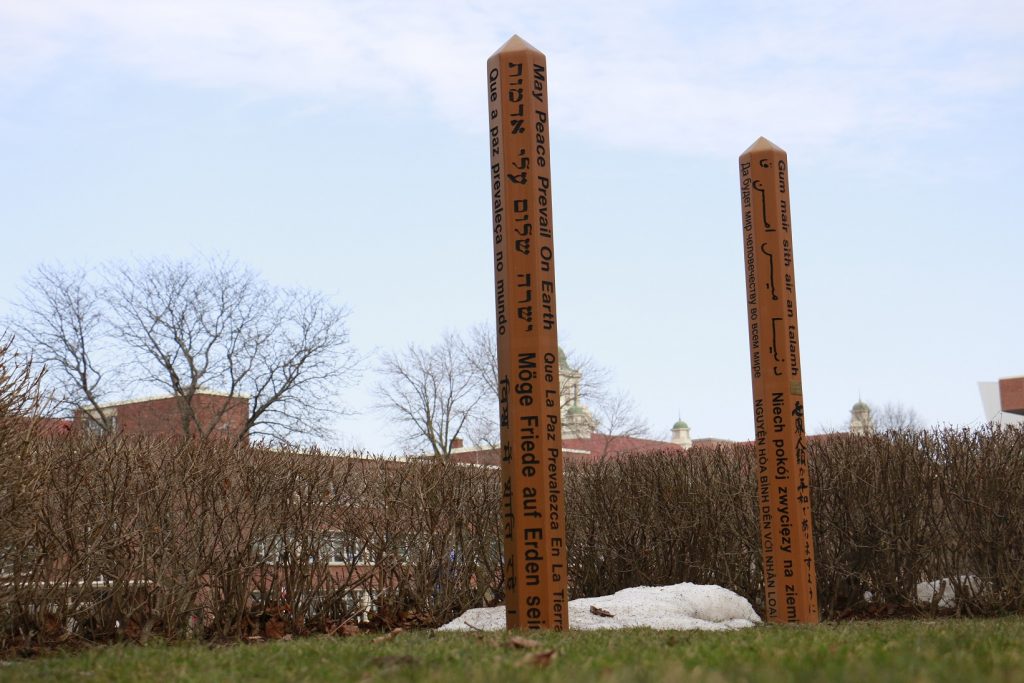 The peace poles were established by the student-led Spiritual Life Council. Photo by Aishwarya Choudhury.

“I’d seen a peace pole before, on an island in Maine where I worked one summer, and I thought it aligned perfectly with our goals as a council,” says Buckley, a magazine major in the Newhouse School and a policy studies major in the College of Arts and Sciences and the Maxwell School. “The poles, I feel, are one tangible way of spreading our mission as a group, as a chapel and as a university.”

Last year, Hudson had been speaking at another college when she saw peace poles outside of that campus’s chapel. It reminded Hudson of an interfaith trip, “Many Faiths, One Humanity,” with Hendricks Chapel in 2011 to London. Students of various faith traditions traveled there and, among their stops, they went to the London War Museum.

“It is a museum of tragedies, and juxtaposed next to it was a Zen peace garden with a beautiful peace pole,” Hudson says.

Those images stayed with Hudson, and in spring 2016, she posed to the members of the Spiritual Life Council if they might want to collaborate with each other on raising funds and giving a peace pole to campus.

Peace poles originated with Masahisa Goi, of Japan, who was impacted by the devastation of World War II and sought to spread a worldwide message of peace. He authored the Universal Peace Message and the World Peace Prayer Society. Peace poles, with the words “May Peace Prevail on Earth” are found throughout the world. 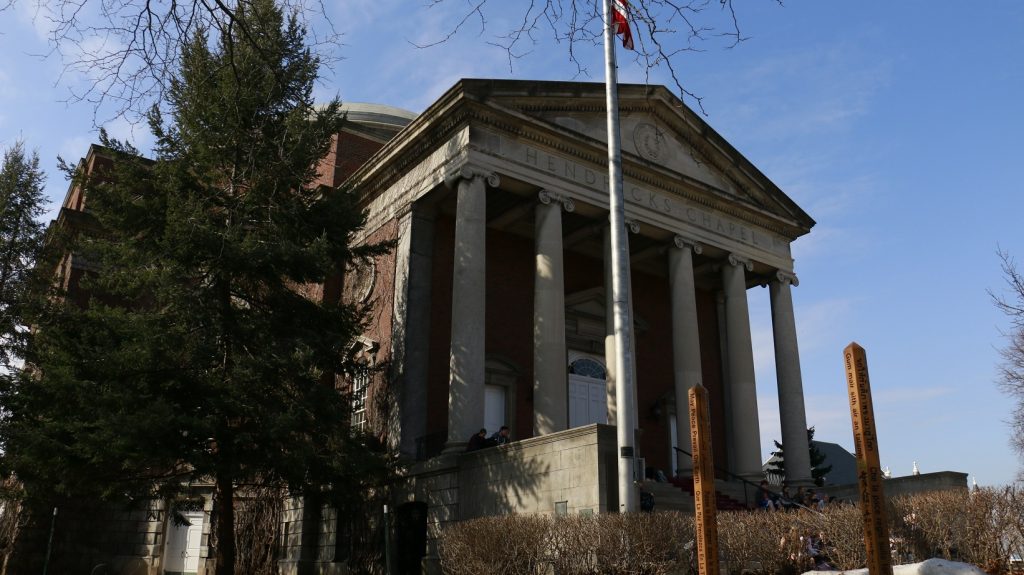 The peace poles include 23 languages and Braille. Photo by Aishwarya Choudhury.

“A good portion of the work of the Spiritual Life Council [which invites representatives from every religious organization recognized by Hendricks Chapel] is to bridge the differences between groups and break down barriers,” Hudson says. “We are all one humanity, and we can uplift each other. For me, the peace poles represent—as one person said—that we can use all the peace in the world that we can get.”

The students quickly embraced the idea, and plans were put into place for a pole—which after discussion with the administration turned into two poles to be able to represent the diversity of campus. Students and student organizations donated funds, and others gave of their time and energy.

“There was a great deal of love and belief and faith put into these poles,” Hudson says.

And with the country caught up in changing times, students found the poles even more meaningful.

“When we began pooling money for this project last spring, I don’t think any of us could have imagined what the country’s political and social climate would be by the time the poles were installed,” Buckley says. “I don’t think we could have timed the release of this message, ‘May Peace Prevail on Earth,’ any better if we’d tried. Our nation and our world are in a very divided place right now.” 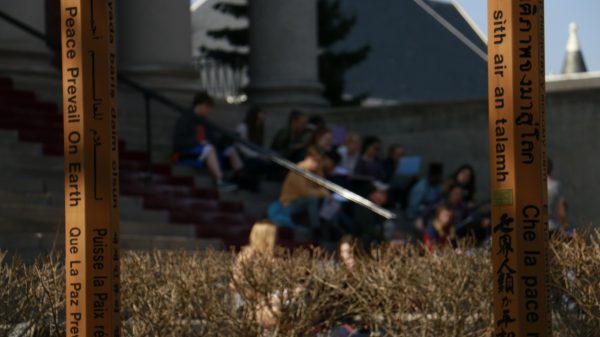 A dedication of the peace poles will take place this semester. Photo by Aishwarya Choudhury.

The poles, which stand about five feet out of the ground, were installed by a Physical Plant crew. A dedication is being planned for later this semester.

Hudson hopes members of the campus community find power in the message of the peace poles.

“If you think about what those words mean, you are asking people to look at each other across differences. I’m looking at you as a human being,” Hudson says. “We can celebrate our similarities, but our strengths come from being different.”

And for members of the campus community who are far from home, a message in their own language can be welcoming. “You know someone thought about you and it’s not so scary any more to be far from home. People have to know that they count,” Hudson says. “If you can see your language being honored front and center in the quad of your university, that’s very powerful.”

Buckley wants the University community to find hope and inspiration in the peace poles.

“While churches and religious institutions may not historically have the best track record in regards to tolerance and peace, I hope these poles will show everyone—students and visitors alike—that this diverse campus, diverse city and diverse chapel all embody the same values and the same desire for peace,” Buckley says. “Hopefully, they will inspire people to make a difference in some way—whether it is big or small—that will ultimately reflect the same beauty as the initiatives and values of our council.”