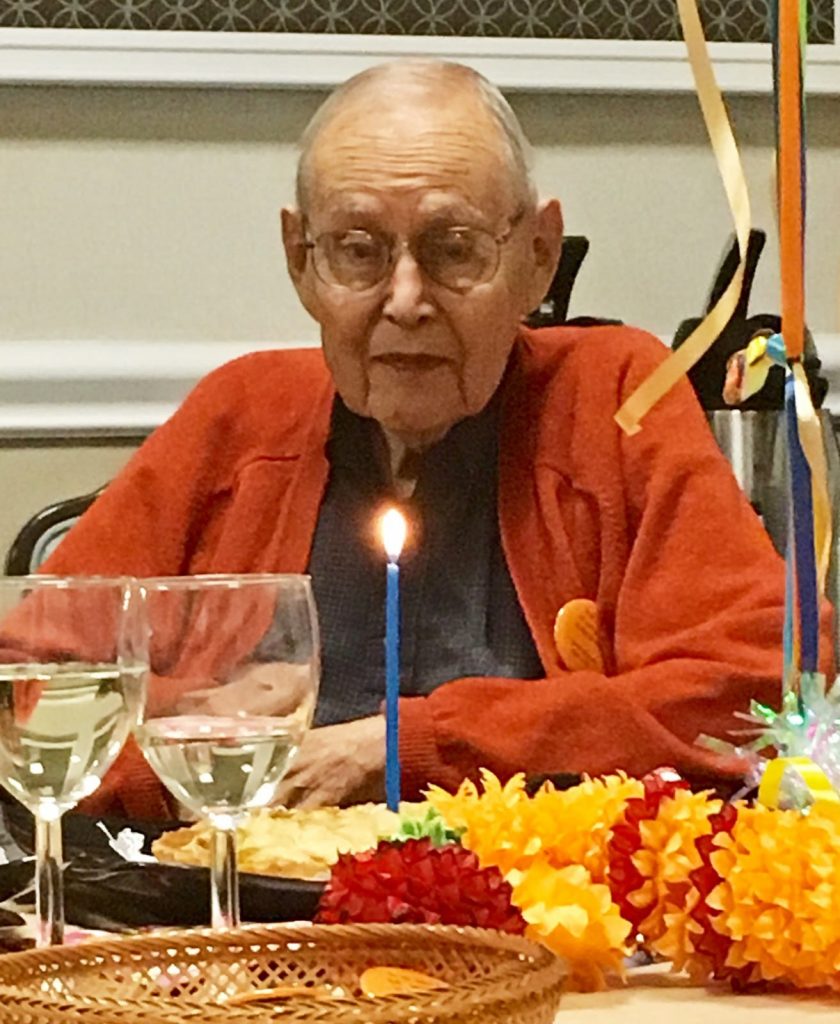 Max R. Bloom was a giant in the field of economics and a pioneer in teaching real estate. To his colleagues in Syracuse University’s College of Business Administration (now the Martin J. Whitman School of Management), he was a generous and approachable mentor. To his students, he was a challenging professor who got them ready for their post-graduation careers.

“Max had so much to offer to his students; he really wanted them to learn and be well prepared,” says Peter Koveos, professor of finance, Kiebach Chair in International Business and director of the Kiebach Center for International Business in the Martin J. Whitman School of Management. “He was an old-style professor, one that earned your respect and in turn respected everyone.”

Bloom, professor emeritus of real estate and urban land economics, died at his home in Parkville, Maryland, on March 6. He celebrated his 100th birthday on Dec. 4, 2016.

Bloom served as an urban economist for the U.S. government from 1940-55, including his time as an economic intelligence officer with the Office of Strategic Services in China during World War II.

After leaving government service, he taught at the University of California, Berkeley, for one year, 1955-56. He then joined the Syracuse University faculty in 1956. His teaching, research and scholarship spanned three of the University’s schools and colleges: the College of Business Administration (now the Martin J. Whitman School of Management), the Maxwell School of Citizenship and Public Affairs and the College of Arts and Sciences.

Koveos joined the management faculty in 1982. Bloom, one of the school’s senior faculty members, never hesitated to share his expertise and experience with his younger colleagues. He always did so with a smile, Koveos says.

“As a younger faculty member, it was great to be working with someone like Max, with his background and education,” says Koveos. “Max was generous with his time, and he always made you feel good to be around him. It was comforting, in my early years as a faculty member, to know I could count on him for sound advice.”

Bloom was also generous in sharing his research, scholarship and teaching around the country and the world. He was a Fulbright professor in urban economics at the Technion Institute of Technology in Israel from 1960-61 and a visiting professor at Cornell University in 1976.

He retired from full-time teaching in 1983 and taught as an adjunct professor for the next several years, earning emeritus status in 1990. Even after his retirement, Bloom continued to share his tremendous expertise in helping to find solutions to international challenges. He was an economist for the United Nations Master Plan in Cyprus in 1992. Throughout his career, he crisscrossed the globe in his work as an economist, traveling to China, Israel, Russia, Spain, London, France, Yugoslavia, Greece, Austria, Germany, Holland, Denmark, Scotland, Hawaii and Mexico.

Bloom played violin in an orchestra as a young man in Bronx, New York, and picked it up off and on through the years. He loved classical music and, with his wife, was an active member of the Syracuse Friends of Chamber Music.

Bloom is described by his family as a true gentleman and a scholar, a brilliant man with a gentle manner and a fierce sense of justice.

Susan Dean, an administrator in the Whitman School, didn’t work directly with Bloom. But she struck up a friendship with him as he remained connected to the school in his retirement. Bloom even found out Dean’s birthday and sent her a card every year.

“He was just a really cool guy,” says Dean. “He loved his family. He was interesting, and interested in other people. He was peaceable. When he spoke, everyone stopped and listened. He made the world a better place.”

Bloom was married to his beloved wife, Pearl Brook Bloom, for 63 years. He is survived by their two daughters, Diane Bloom and Amy Bloom Connolly; his brother, Carl; two grandchildren; three great-grandchildren; and many loving nieces, nephews and friends.