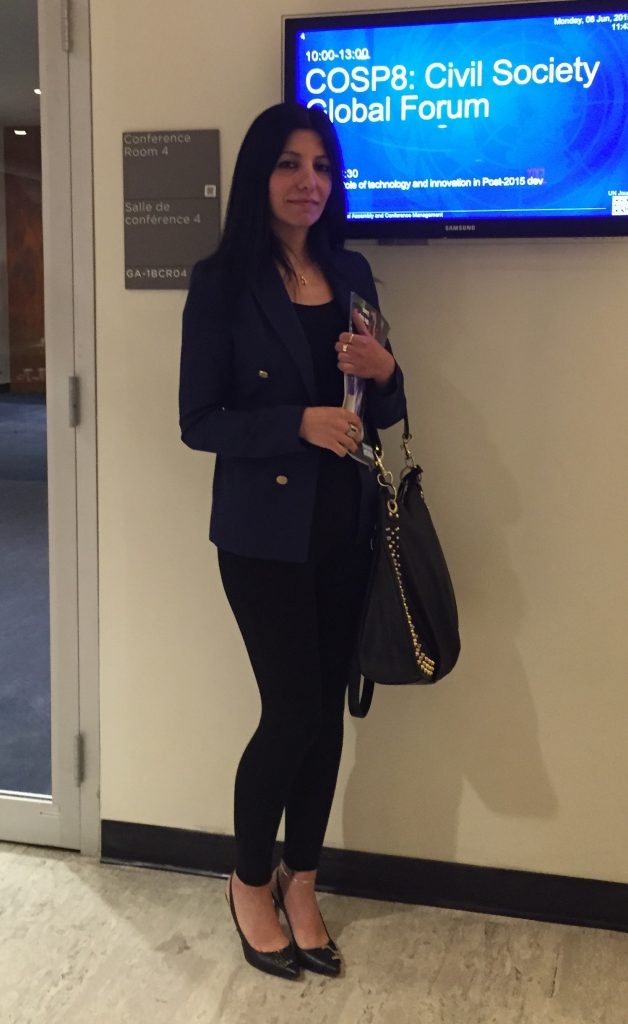 Roula Jneid, who escaped the conflict in Syria to study at the College of Law

Violette Khabbaz, silent, is listening to a conversation on a March afternoon. Sunlight pours through a window and illuminates her face as she leans across the counter of the Byblos Mediterranean Café, the restaurant she operates on North Clinton Street in downtown Syracuse.

One of her employees, Liqaa Al Dulaimi, is having coffee with a friend, Roula Jneid. It is a precious but routine moment in the restaurant business, a gentle lull between bursts of customers that brings an instant of warmth, of relaxed fraternity.

Yet there is nothing routine about the respite that Jneid and Khabbaz help provide for Al Dulaimi.

For Jneid, Syracuse is a place of safety, of asylum, from the violence and chaos in Syria. The 2015 graduate of the College of Law now works with Refugee Resettlement Services in Syracuse, an arm of Catholic Charities of Onondaga County.

Her official position is called an “employment specialist,” but her true role is more expansive. She met Al Dulaimi shortly after the 22-year-old arrived in Syracuse. Al Dulaimi is from Iraq. Her parents had both been killed during the war. As a refugee, Al Dulaimi found herself alone in an American city where few people spoke her language, a city whose wintry conditions were the opposite of the heat and sun she’d known while growing up.

Jneid speaks Arabic. At the Refugee Resettlement offices, her ease with the language gave her a bond with Al Dulaimi.

Al Dulaimi needed a job. Jneid had heard that Khabbaz, a native of Lebanon, has a big heart and is willing to give refugees a chance. Jneid called and asked Khabbaz if she might hire Al Dulaimi, at the restaurant.

Khabbaz agreed. Now, whenever Al Dulaimi begins a shift, Khabbaz quizzes her about her life in Syracuse. Al Dulaimi has earned her driver’s license. She dreams of becoming a nurse. Khabbaz wants to know all about it, about her schedule, about her plans to attend Onondaga Community College in the autumn.

“She is more like a mom to her,” Jneid says of Khabbaz.

To Jneid, building those connections goes to the core of her job:

She knows exactly how it feels to seek a new life, in a new world.

For many reasons, Jneid is careful about discussing the conditions she fled in Syria. Her parents are still there, and their safety is her primary concern. But Jneid also has relatives in Syracuse. When she was a child, her family often visited this city.

In the early days of the civil war, Jneid did not believe the violence would get close enough to be a threat. Like her father, she was a lawyer. Their life was routine, pleasant, without incident.

“Syria,” she says, “had always been very safe.”

That changed, in a fast and terrifying way. Families they knew began losing relatives in the bloodshed. In 2011, Jneid came to Syracuse to join her brother Fares, then a student at the University. She saw it as a reprieve. She believed the war would peak and recede, that she would soon be able to return.

Instead, her homeland turned into a global crucible of suffering.

Jneid’s training in the law meant nothing in her new home. In Syracuse, she had to start over. She took a job as a jewelry specialist at the J.C. Penney Co. As it became clear to her that she could not go back to Syria, she went through what she describes as an emotional struggle.

Everything turned around because of a spontaneous decision. One day, on the urging of her siblings, she decided to visit the College of Law. She did not call beforehand. She did not do any research to see if there might be opportunities. Joined by her sister Mira, Jneid simply walked in the front door and asked if any programs might be available for students from overseas. 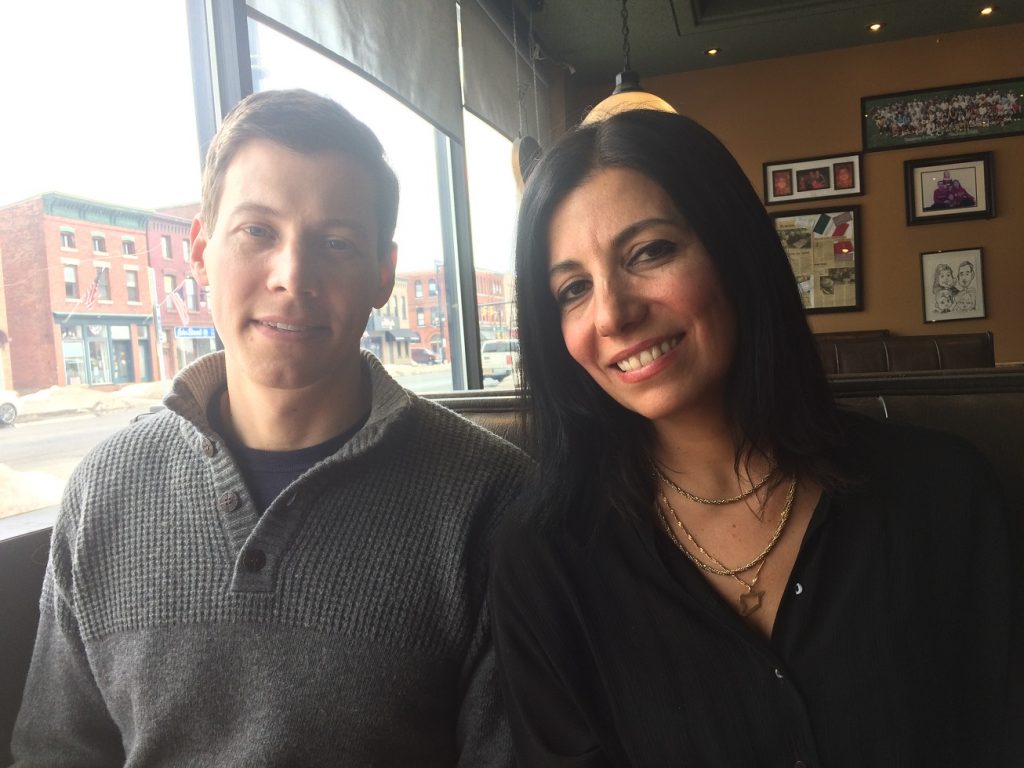 Andrew Horsfall, executive director of international programs and initiatives at the College of Law, (left) and Roula Jneid, a Syrian who sought his help to earn a law degree, at Biscotti’s Cafe in Syracuse

By sheer luck, Andrew Horsfall happened to be at his desk.

“I’m the right guy,” he told her, after hearing her story.

Horsfall is executive director of international programs and initiatives at the College of Law. He recalls how he was stunned by Jneid’s “awful and powerful” account of going from “what seemed like a full and robust life in Syria to suddenly having it all turned upside down.”

Still, he was also “struck by Roula’s determination to take her experience as a lawyer and as a refugee to become a more productive member of her community here in Syracuse.” He told her about the Open Society Foundation’s Civil Society Leadership Award.

That scholarship program, Horsfall says, “promotes the Rule of Law, human rights and capacity-building programs in the U.S. and abroad through funded study opportunities.”

He saw Jneid as a perfect candidate. He guided her through the application process, which took almost a year. Despite Jneid’s background, there was no guarantee she’d be successful.

The moment when she learned that she’d been accepted, she says now, will always rank as one of the pivotal days in her life.

“From the beginning, she’s been a person who survived and prevailed,” says Arlene Kanter, founder and director of the College of Law’s Disability Law and Policy Program.

Kanter has worked with many international students. She says Jneid was historically important at Syracuse: She was the first survivor of the Syrian civil war to study in the College of Law, “and she opened an entire world for all of us about the inadequacy of the humanitarian response to international crises.”

From Jneid, Kanter says, “I learned so much more about the Syrian conflict than I ever knew.” Jneid’s accounts of the plight of women—as well as her descriptions of Syrians with disabilities, isolated by the conflict—were so raw that it “makes it hard to sleep at night,” Kanter says.

She reserves her greatest admiration for the way Jneid commits herself to helping refugees, not only from Syria but from other nations traumatized by war. Kanter remembers when Jneid would collect used clothing at the College of Law to distribute to newcomers in Syracuse. She admires her “sense of responsibility and obligation to serve her community.”

As for Jneid, she carefully avoids discussing politics. She acknowledges that she worries about attempts to impose a new American travel ban for citizens of six predominately Muslim nations, including Syria. She is afraid to leave this country to visit her family overseas, out of concern that she might not be able to return.

For now, she dedicates herself to helping refugees like Al Dulaimi. Her job with the Refugee Resettlement Program on the city’s North Side involves making it easier for newcomers—often men and women who had high-skill jobs in their homelands—to find productive work. She understands the frustration of going from a place where your profession is your identity, your means of self-esteem, into a culture where so many doors seem closed to you.

“Roula is very self-motivated and very positive,” says Felicia Castricone, program director at Refugee Resettlement. “Simply that she’s from Syria—that she understands the language, and the experience, and knows what Syrian refugees are going through—that’s very valuable to us. There’s a rapport there the rest of us just can’t achieve.”

Jneid says she has found her calling in the work. “When you help this population, when you meet them, their stories live with you,” she says. She is drawn to such refugees as Al Dulaimi, the young woman from Iraq whose innate resilience is a quality Jneid sees as an inspiration.

She intends to eventually take the American bar exam and return to practicing law. She expects she will specialize in helping refugees, an opportunity she sees as a gift.

“When you do good, you feel good,” Jneid says.

Kanter, her friend and professor, says Jneid has “amazing legal skills and is an amazing writer, researcher and thinker.” She looks forward to the day when Jneid brings the same insight and compassion to the courtroom that she now shares with refugees in Syracuse.

“Her clients will not only have the most talented legal help imaginable,” Kanter says. “They’ll be represented by an extraordinary human being.”