Vernon E. Jordan Jr., civil rights activist, business executive and attorney, will deliver the 2017 Commencement address at the ceremony for Syracuse University on Sunday, May 14, at the Carrier Dome. Jordan will also be awarded an honorary degree, a Doctor of Laws, at the 163rd Commencement exercises. 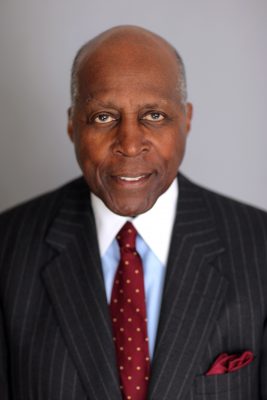 “Vernon Jordan has been a leading American civil rights leader and public policy advisor for more than 50 years,” says Chancellor Kent Syverud. “Our graduates will benefit from hearing Mr. Jordan’s insights and perspective on the global society they are about to enter. His vast experience and success in government and business, combined with his commitment to a civil and just society, will inspire our students as they set off to chart their own course in the world.”

Jordan is a senior managing director of Lazard Frères & Co. LLC in New York. There, he works with a diverse group of clients across a broad range of industries. Prior to joining Lazard, Jordan was senior executive partner with the law firm of Akin Gump Strauss Hauer & Feld LLP, where he remains senior counsel. There, Jordan practiced general, corporate, legislative and international law in Washington, D.C.

In 1992, Jordan served as chairman of the William Jefferson Clinton Presidential Transition Team. He has held several presidential appointments, including the President’s Advisory Committee for the Points of Light Initiative Foundation and the Advisory Council on Social Security.

“I’m grateful to Syracuse University for this honor. It has been 60 years since I graduated from college, and I’m eager to share with the Class of 2017 and the Syracuse community my thoughts on, and the need for, our shared fight for justice,” says Jordan.

“Our graduating class is fortunate to have someone as distinguished as Vernon E. Jordan, Jr. as our Commencement speaker,” says Senior Class Marshal Rachel Brown-Weinstock. “His address will be an exciting part of graduation, and I know my fellow classmates will be inspired by his story.”

Senior Class Marshal Nedda Sarshar is also looking forward to Commencement and hearing Jordan’s charge to the Class of 2017.

“Vernon Jordan has wisdom beyond measure and has experienced things none of us can even imagine,” says Sarshar. “I am eager to hear his perspective as we prepare to make our own marks on the world.”

As a young attorney practicing in Arkansas and Georgia, Jordan was at the forefront of the Civil Rights Movement in the 1960s. He served as Georgia field director for the National Association for the Advancement of Colored People (NAACP) and director of the Voter Education Project of the Southern Regional Council. He later served as president and CEO of the National Urban League and executive director of the United Negro College Fund.

A list of the other honorary degree candidates will be announced soon. For full information on Commencement 2017, visit commencement.syr.edu.

Dear Students, Faculty, Staff and Families: Over the last several weeks, the University has provided a lot of information about return to campus, including related to move-in, testing, quarantining, campus life, etc. We recognize that all this information can be…

Summer 2021 is just around the corner and Syracuse Abroad is ready to revitalize the spirit of summer study abroad at its European Centers. Syracuse Abroad Centers allow students to spend four to five weeks in a dynamic European cultural…