“The greatest of evils and the worst crime is poverty,” declared George Bernard Shaw in the introduction to his famous play “Major Barbara.” Written in 1906, this deliciously provocative comedy is the next offering in the Syracuse University Department of Drama season. Performances in the Storch Theatre at the Syracuse Stage/Drama complex begin March 31, with the official opening night on April 1.

As in most of his famed comedies, Shaw in “Major Barbara” employs the dramatic technique of dialectic—that is, setting 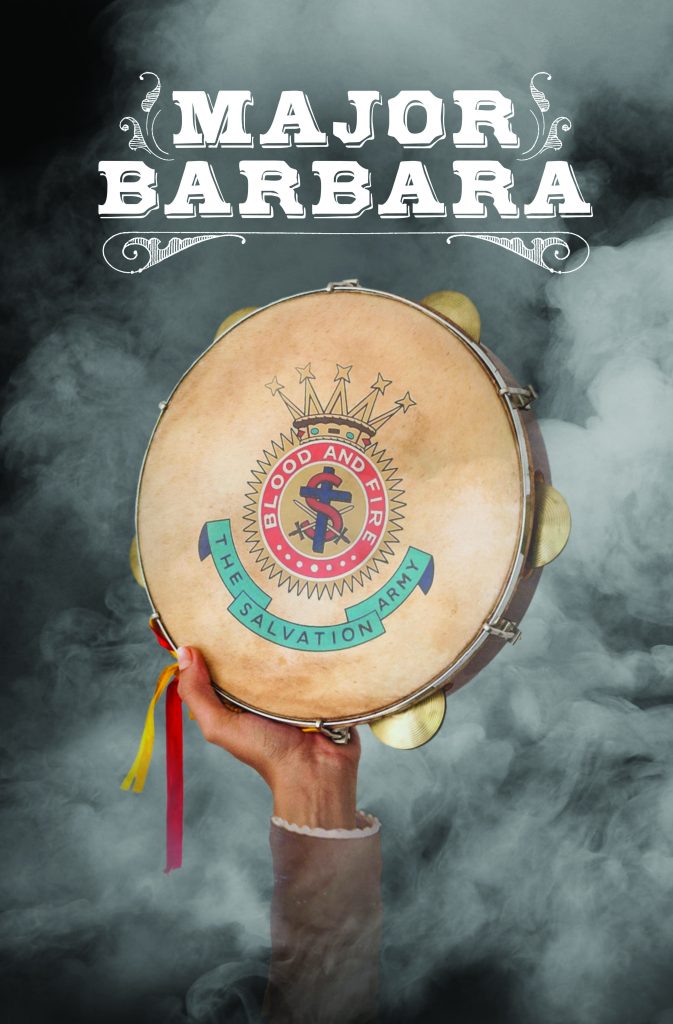 characters with opposing ideas against each other. In this case, Shaw complicates the matter—as he frequently does—by making the opposites members of the same family. On one side is Barbara Undershaft, the “Major” of the title, who as a Salvation Army officer believes that the best way to help the poor is by first saving their souls. On the other side is Andrew Undershaft, Barbara’s estranged father and a wealthy arms merchant, who contends that the best remedy for poverty is gainful employment, even if that employment involves selling lethal arms indiscriminately to anyone willing to pay. Will a trip to Barbara’s shelter persuade the elder Undershaft to give up cannons? Or will a trip to the cannon works persuade Barbara to forsake the Salvation Army?

Shaw’s trademark is to make conversation a form of verbal pugilism. The flurry of exchanges contain comic jabs, confounding feints, sucker punches and knock-out blows, with the naïve and ignorant the favored targets. It’s the drawing room reconfigured as intellectual and moral boxing ring, and those who plant their feet firmly in the certainty of an ideal will surely find their knees buckling and heads woozy. Shaw delights in setting up arguments only to knock them down like so many bowling pins.

Shaw also delights in infusing the play with a degree of preposterousness. A comic sub-plot concerns the need for Undershaft to bequeath his company not to a blood relative, but to a “foundling.” It just so happens that one is nearby. Shaw, too, was a master of the running gag, and the character of Charles Lomax, suitor to Barbara’s sister Sarah, offers a superb example of this comic device in action.

In staging the play for the Department of Drama, director Gerardine Clark moves the action from pre-World War I to the 1930s. Situating the play between the two World Wars heightens the arguments about arms manufacturing, lifting them above the theoretical and making the destruction palpable. The other characters refer to Undershaft as the Prince of Darkness, a title that resonates quite seriously in the 1930s. Moreover, the widespread poverty experienced by much of post-World War I Europe strengthens the connection between this “greatest of evils and the worst crime” and the warfare that erupted at the end of the decade.

For all of the humor and wit contained in “Major Barbara,” Shaw understood that poverty breeds violence on small and large scales. That observation made “Major Barbara” prescient in 1906 and has insured the play’s relevance in the 100-plus years since.