Samantha Skaller had a two-word explanation for why she traveled across Syracuse on Monday night to Le Moyne College. She was part of a packed house in Grewen Hall that listened for more than two hours as Jackson Katz—renowned educator, author and filmmaker—made a passionate call for American men to rethink how they can help prevent gender and relationship violence.

Skaller is a student peer educator. She works closely with Michelle Goode, a University specialist whose focus is preventing sexual and relationship violence. Katz’s appearance at Le Moyne was part of his two-day visit during the 23rd annual White Ribbon Campaign in Central New York.

Coordinated by Vera House—an agency that provides comprehensive services in response to sexual and domestic violence—the campaign is led by Central New York men. It involves what Vera House executive director Randi Bregman and men’s outreach coordinator George Kilpatrick both describe as a fundamental mission: Every participant takes a vow against committing, condoning or remaining silent about domestic abuse and violence.

In a sense, the entire Katz presentation was based on that fundamental premise. On the Syracuse campus, the peer educators spend hours trying to build on that awareness. It is why Goode brought a carload of students to hear Katz speak about an epidemic of heartbreak whose scar tissue, he emphasized, is not limited to women and children.

“I’m going to argue,” he told the audience, “that these are men’s issues.” 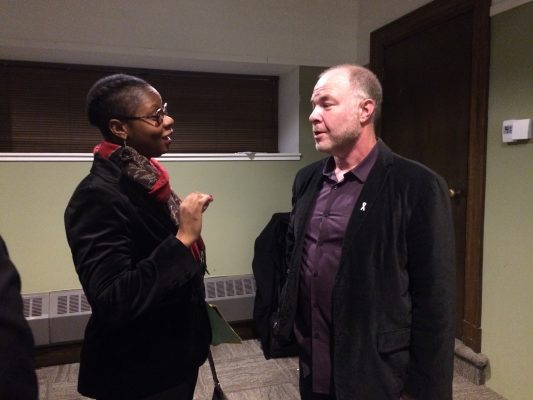 Katz, raised in Massachusetts, has spent a career confronting the generational damage caused by violence and abuse. He has written books, played a central role in several films, and given a TEDx talk that has had close to 1.7 million views.

Katz was an early advocate of the approach known as “bystander intervention.” He argues there is a healthy, courageous way for men to step in and change perceptions when they witness actions or remarks, even in casual conversation, that reinforce damaging stereotypes and heighten the potential for violence.

The point he emphasized Monday—and the point that Skaller found especially compelling—was the idea that American men benefit from the ripples of that intervention as much as those they are called on to defend.

“Life is short, and if we want to make a difference, we’ve got to get moving,” Katz said. He said too many men are essentially frozen into the idea that if they don’t actively engage in domestic violence, it’s not their problem.

What that attitude guarantees is that nothing will really change.

Katz contends that millions of Americans remain in denial about the powerful grip of a cultural crisis with heartbreaking repercussions. He pointed out that in 57 percent of American mass shootings in recent history, the assailant was tied to “some component” of domestic violence.

Yet that deep link is swept aside, almost forgotten, in the media storm that follows all the bloodshed, Katz said.

He used images from popular films and video games to emphasize the growing deluge of graphic violence pouring down upon American boys and girls. He spoke of how children who see violence against others in their homes are often described as “witnesses.”

In truth, he said, that trauma makes them victims.

Katz also spoke of the harsh reality that millions of American boys will themselves become the targets of violence or sexual abuse—and how that abuse makes them 10 times more likely to inflict the same wounds upon someone else. Because young men are conditioned to bury those experiences, he said, that cycle of “interpersonal violence” is far more common than many people choose to believe.

The damage, culturally, extends across generations.

That led him toward the conclusion that made such an impact on Skaller. “We need to raise the bar a little higher for what it means to be a good guy in the United States in 2017,” Katz said. He said the whole notion of strength and masculinity has been turned on its head and that manhood is too often seen as some harsh construct involving power, intimidation and a kind of emotional solitude.

In reality, Katz said, masculinity involves reflection, humility, the courage to admit mistakes and to apologize ….

And the ability to embrace and empathize with others.

That resonates with Skaller. She is part of a student effort at Syracuse University, coordinated by Michelle Goode, to build “a community that doesn’t support harassment or violence” for anyone who might feel threatened or alone.

Skaller agrees that asking young men to embrace such a philosophy does not reject the notion that manhood demands courage. Instead, it is a call for a more honest and braver form of masculinity, a variety that could transform the culture.

Seth Quam, a senior from Lombard, Ill., also accompanied Goode to Katz’s talk. Quam, a volunteer in Goode’s office, shared Skaller’s impression of “how male-perpetrated, gender-based violence is deeply destructive to men, that it traumatizes children growing up in homes with domestic violence, that it affects men who are victims of violence at the hands of other men.”

He saw truth in Katz’s reflection that the feminist movement—by casting sunlight on young victims of domestic violence, by calling for new definitions of masculinity—is not threatening to men, but instead strengthens the fundamental notion of manhood.

“All of this provides me with tools to continue conversations and activism to work to end sexual and relationship violence,” Quam said.

“He calls us to commit ourselves to much more than responding to gender violence,” said Bregman, executive director of Vera House. “He challenges us to change the culture and to use our own power to lead change.”