Farhana Sultana, associate professor of geography at the Maxwell School, is passionate about one of the most basic and important resources on Earth: water.

It is through the lens of water by which she examines a multitude of social issues related to access to clean water, including health, education, environmental justice and gender equality. According to the United Nations, 783 million people do not have access to clean water and almost 2.5 billion do not have access to adequate sanitation. Six to eight million people die every year from the consequences of water-related diseases.

Due to her decades-long research into water access, Sultana was invited to speak at The Human Right to Water workshop hosted by the Pontifical Academy of Sciences in Vatican City on Feb. 23-24. She was one of several international researchers, humanitarian workers, government officials and corporate leaders invited to present and debate issues about water insecurity and ongoing global efforts to ensure access to clean water.

At the end of the two-day workshop, Sultana and the other participants were part of a small audience to hear Pope Francis speak about the issues of water insecurity and the human right to water. The Pontiff reinforced the importance of ensuring global access to clean safe water by working concertedly to implement the human right to water everywhere. 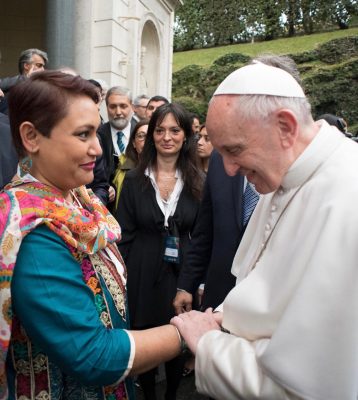 “Being in the same room as Pope Francis was a mixture of intense emotions: awe, respect, gratitude, inspiration, validation, joy,” Sultana says. “I have been working on issues of water access for my entire academic career, and the title of my first book is ‘The Right to Water,’ so to be in the same room with such a profoundly revered and august leader who also cares about and speaks of the importance of the human right to water in similar ways was indeed humbling.”

“It was simply magnificent to hear Pope Francis in person reinforce the importance of water. His speech resonated with me completely, as he argued that the importance of ensuring water access and equity is the most critical action that we can take globally to address issues of poverty, inequity and injustice,” she says. “He urged for a culture of care to be fostered, for policymakers to take more action, and for educating young people about the gravity of the situation. As an educator who teaches courses on water and is passionate about helping solve the global water crises, this definitely moved me. It was indeed a validating moment.”

Afterwards, Sultana met and spoke with Pope Francis. She gifted him a pair of handwoven baskets made by women in a craft cooperative in Bangladesh, a country where she has been carrying out field research during her sabbatical for the spring semester.

“I thanked him for all his important work and said that I am grateful for his contributions on advancing issues of social and environmental justice,” Sultana says. “He held my hand in both his hands and smiled and then laughed, thanking me several times in return. It was a lovely conversation. I will never forget that.”

During the workshop, Sultana’s presentation focused on the importance of linking the human right to water to gender rights.

“Women and girls, especially in poor and marginalized communities all over the world, struggle for clean, safe water daily, which affects education levels, societal development, well-being and prosperity,” Sultana says. “I demonstrated that the connections between water justice and gender justice are linked to broader issues of democracy, social justice and politics of inclusivity. I focused on the important topic of gender rights as being central to human right to water, and this point was referred back to and highly appreciated by other speakers throughout the workshop.”

She also stressed the importance of raising awareness and education on these issues, as water affects all aspects of societal development and environmental sustainability.

At the conclusion of the workshop, the Vatican Declaration on the Human Right to Water was signed by Pope Francis and is now an official document of the Vatican. Sultana is a co-signatory of the document.

“One of my contributions to the document was having the importance of women and vulnerable people be incorporated into the text,” says Sultana.

Sultana says the trip to Rome to participate in the workshop has not only informed her ongoing work but also showed her the beauty of the Vatican—the participants had access to parts that are not open to the public.

“I have been devoted to advancing water justice and the human right to water for many years, and this experience has reinforced my desire to continue my efforts not just through my teaching and research but through the many other services and outreach activities that I have always participated in,” says Sultana. “I am grateful to have been an invited speaker to the Vatican and to hear Pope Francis give significance to my own passions.”