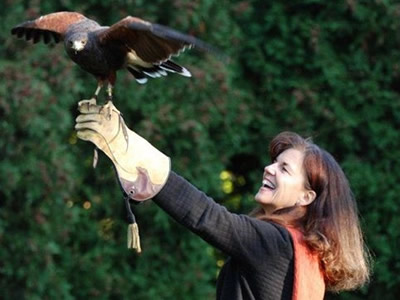 The Department of Biology in the College of Arts and Sciences is embarking on a new wave of interdisciplinary teaching and research, thanks to a generous gift by an alumna of the University.

Anne Marie Patti Higgins ’76, G’90, a local nurse practitioner and family therapist, has donated funds for the establishment of the University’s first red-tailed hawk nest cam. She made the donation in December 2016 in memory of her husband, Thomas G’67, a Syracuse city court judge and avid birdwatcher.

Ramesh Raina, associate professor and chair of biology, applauds Higgins’ generosity, saying it ensures the department’s future success, while elevating its national impact. “Her support continues our commitment to science and service,” he explains. “The streaming audio and video enables us to study the behavior, development, biodiversity and adaption of hawks and other wildlife, proving that some of the best learning takes place outside the classroom.”

Robert Silver, professor of biology, is the project’s faculty sponsor. After observing a family of hawks last spring on campus, he approached Raina with the idea of a webpage devoted to the adults, their fledglings and their nesting. “The idea was to display and record live video and audio of the nest activities in a manner suitable for scientific studies,” says Silver, whose research resides at the nexus of biology, engineering and physical science.

Raina agreed, and Silver began considering the technology necessary for the project. 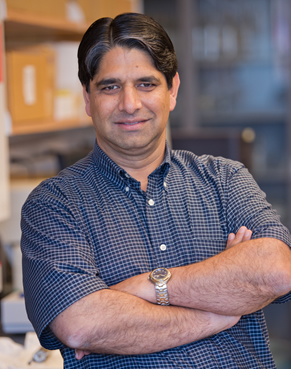 Around the same time, Higgins began inquiring about how to start a hawk nest camera at the University. Several people suggested she contact Silver. It was after meeting him and deciding to collaborate that the project took flight.

Silver says that, given the importance of hawks in the ecosystem and the growing popularity of birdwatching (i.e., the act of monitoring, feeding, filming or photographing birds), the nest cam provides important new information for biologists and birders alike.

According to the U.S. Fish and Wildlife Service, birdwatching is one of North America’s fastest-growing hobbies, with more than 48 million birders in the United States.

The nest cam, recently installed in Lyman Hall, consists of a color video camera with a fish-eye lens, focused on two red-tailed hawk nests. The nests are in opposite corners of Lyman’s north archway, facing the Life Sciences Complex (LSC). A camera also is in Lyman’s south archway, the site of last year’s nests, but does not show any nesting activity. Both cameras provide wide-area coverage, along with real-time movement and control.

Silver says Syracuse’s camera system takes an important new approach from other bird cameras. “Our cameras have fish-eye lenses whose recorded images can be ‘dewarped’ to provide undistorted, detailed images of the nest activity,” he says, adding that the technology, developed several decades ago, is only now coming to the commercial market. “A special high-fidelity microphone has been installed to facilitate simultaneous audio and video streaming to a computer.” 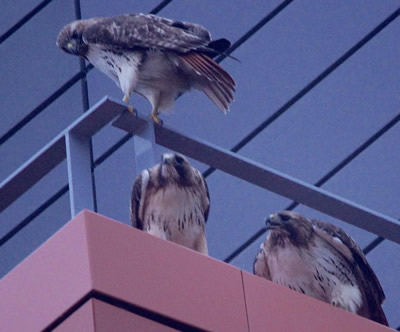 The online nest cam is accompanied by local weather data (e.g. temperature, humidity, wind speed, barometric pressure and precipitation), which can be time-stamped and archived to assist with studying bird behavior and development under diverse meteorological conditions.

The live nest cam is available online in a website that also contains information about and photos of Syracuse’s family of red-tailed hawks, and a tribute to Higgins’ husband.

In addition to a Twitter feed, which chronicles and updates nest activity, project organizers are excited about setting up pan-tilt-zoom (PTZ) cameras. One is currently inside LSC, and provides a broad view of both Lyman archways. Two more PTZ cameras will be mounted onto the LSC roof, ensuring long-range views of the adult red-tails’ activities, including their flights to and from the nests.

“The PTZs will provide an additional perspective and view of the chicks in the nest, up to and including fledging,” Higgins says. “This valuable data will be recorded and archived.”

Silver is excited about the potential for cross-disciplinary work in avian behavior and bioacoustics, ecology, evolution, physiology and conservation.

He hopes the nest cam also will breathe new life into zoological studies, a mainstay of A&S for more than a century. 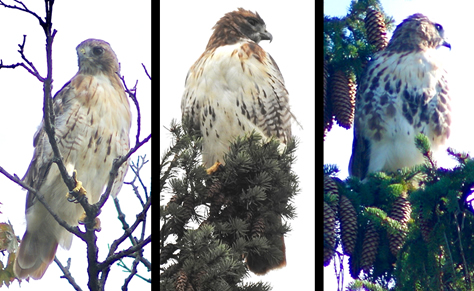 In 1970, the departments of Zoology and Botany merged into the Department of Biology—today, a leader in cell signaling, ecology, evolution and population biology.

“With this nest cam, we are taking a bold step toward strengthening our research portfolio,” he continues. “It could facilitate strategic partnerships with academic, nonprofit or government organizations, such as NSF [the National Science Foundation], enabling students or local citizens to engage in conservation science. The nest cam also could help students learn and conduct field research, resulting in peer-reviewed articles.”

During a recent meeting in LSC, Higgins explains how the nest cam provides a literal bird’s-eye view of three urban-dwelling red-tails: a male named Otto and two females named SU-Sue (pronounced soo-soo) and SUNY. Otto and SU-Sue are a mated pair. “We are able to study them 24/7 in their natural nesting habitat. Everything is streamed, archived and closely studied,” she says.

For years, Higgins has observed a family of hawks at Cornell University, whose own live red-tailed hawk nest cam enjoys international popularity among birders-on-the-ground (BOGs).

Last June, some BOGs from Cornell tipped off Higgins about the red-tails at Syracuse. That the three adults tended a single nest of chicks, a family configuration that is highly unusual, intrigued her.

“I live 2.5 miles from Syracuse University, so when I saw my friends streaming live video of this unique family, I raced over here,” says Higgins, who arrived after one of the chicks had fledged the nest. (The rest of the chicks followed over the next two weeks.) She and other local BOGs began tracking the adult hawks and the juveniles, the latter of whom have since moved on to their own territories. “The three adults are here year-round. When I am in town, I try to photograph them almost daily, and, along with other BOGs, document their activities online.”

Much of this information appears on the Syracuse Hawk Chatters Facebook page, which is hyperlinked to the University’s nest cam.

Red-tails often build their nests in the tops of trees or on window ledges. The male and the female participate in the nest-building process, which takes four to seven days, and involves a copious supply of tree twigs and dry sticks. Strips of bark, foliage and vegetation line the inside of the nest, known as the inner cup.

“It’s common for red-tails to refurbish their previously used nests,” Higgins says, adding that, of the four nests currently in Lyman’s two archways, only one probably will be active this spring. “We hope to see some eggs in the coming weeks.”

According to the Cornell Lab of Ornithology website, red-tails are monogamous, and mate for life. They also do not cooperatively nest like some other birds of prey. Although Otto and SU-Sue have been photographed mating, there is no record of any such activity between him and SUNY.

Higgins explains that red-tails usually lay one clutch of eggs per year, consisting of one to four eggs. “It is possible that SU-Sue and SUNY each laid three eggs last year in the same nest, but we cannot know for sure,” she says. “Whether or not Otto is the father of all six of last year’s brood is anyone’s guess.”

While Higgins has seen all three hawks near to one another this past year, she is unsure if all of them will tend the same nest. “We don’t know if one or both females will produce eggs,” she continues. For Higgins and other BOGs, the nest cam provides a glimpse into a world that heretofore has not been visible.

Brian McLaughlin is excited about the nest cam. A self-described “photographic bird enthusiast,” he has shot 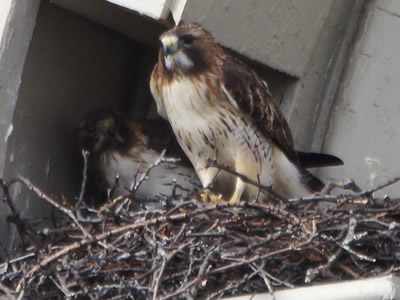 thousands of photos of Otto, SU-Sue and SUNY. “Birdwatching requires patience and perseverance,” says McLaughlin, who supervises acquisitions and cataloging in Syracuse’s E.S. Bird Library. “Having a wildlife webcam on a bustling campus opens up lots of possibilities for birdwatchers. The concept isn’t completely unique, but it also isn’t the norm.”

Because all three hawks are well fed and tolerate people suggests they have settled into their territory.

McLaughlin marvels at how the hawks have adapted to the congestion on campus.

“I am pleased that the people who follow these magnificent hawks at Syracuse are not too intrusive,” he says. “I also am impressed with the [hawks’] tolerance for commotion, especially with all the construction going on.”

Silver agrees. “As someone interested in how cells make decisions, I think the interdisciplinary possibilities [of the nest cam] are vast,” he continues. “Whether we study the hawks’ acoustic signatures, in hopes of deciphering what their vocalizations mean, or use forensic technologies to identify what is inside an egg, we are envisioning the life sciences at Syracuse in an imaginative, new way. The future is at our fingertips.”

Additional support for the nest cam website comes from Lynn Fall, graduate program administrator in biology; Jeff Pitt and Tim Schutt, director of information technology and a computer consultant, respectively, in A&S computing services; and members of the Office of Campus, Planning, Design and Construction.