NPR’s Lakshmi Singh ’94 will deliver the keynote address at the 2017 Newhouse Convocation Ceremony on Saturday, May 13, at 12:30 p.m. in the Carrier Dome. 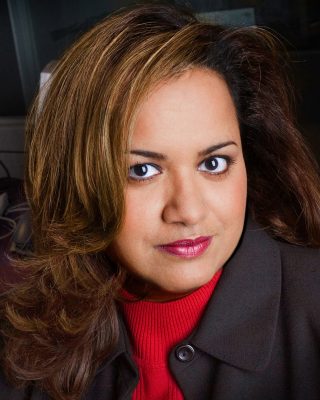 Singh is an outspoken champion of diverse voices, thought and collaboration, within newsrooms and throughout news coverage. The award-winning veteran broadcaster is followed by millions of listeners on NPR, whether in the role as anchor or as guest host on weekends for the NPR program “All Things Considered.”

As a field reporter for 25 years, Singh focused extensively on immigration policy and health, both issues now at the forefront of news coverage of the current presidential administration.

Singh tries to get the right mix of rich sound and descriptive narrative to transport listeners to a place hidden deep in the imagination. That was never more challenging for her than during her time as a documentary producer and reporter for Soundprint in Haiti, where she uncovered compelling stories of women struggling to live with HIV/AIDS while their politically embattled government was on the verge of collapse.

As a journalist of Puerto Rican and Indo-Trinidadian descent, Singh is recognized as an influential voice for change in the communications industry. She was honored as such by ColorComm, a national organization for women of color in all areas of communications.

An alumna of Syracuse University with a dual degree in broadcast and digital journalism from the Newhouse School and Latin American studies from the College of Arts and Sciences, Singh began her career at WAER in Syracuse. She later worked as a local host and reporter at NPR member stations KPBX in Spokane, WMFE in Orlando and WAMU in Washington, D.C. Singh has also contributed to PRI, Voice of America and Gannett News Service.

For more information about the Newhouse School Convocation Ceremony, contact Susan Nash at 315.443.5007 or sknash@syr.edu.