After Eight Years in Syracuse, a Student’s Postcard Goodbye: ‘You Will Always Be a Home to Me’ 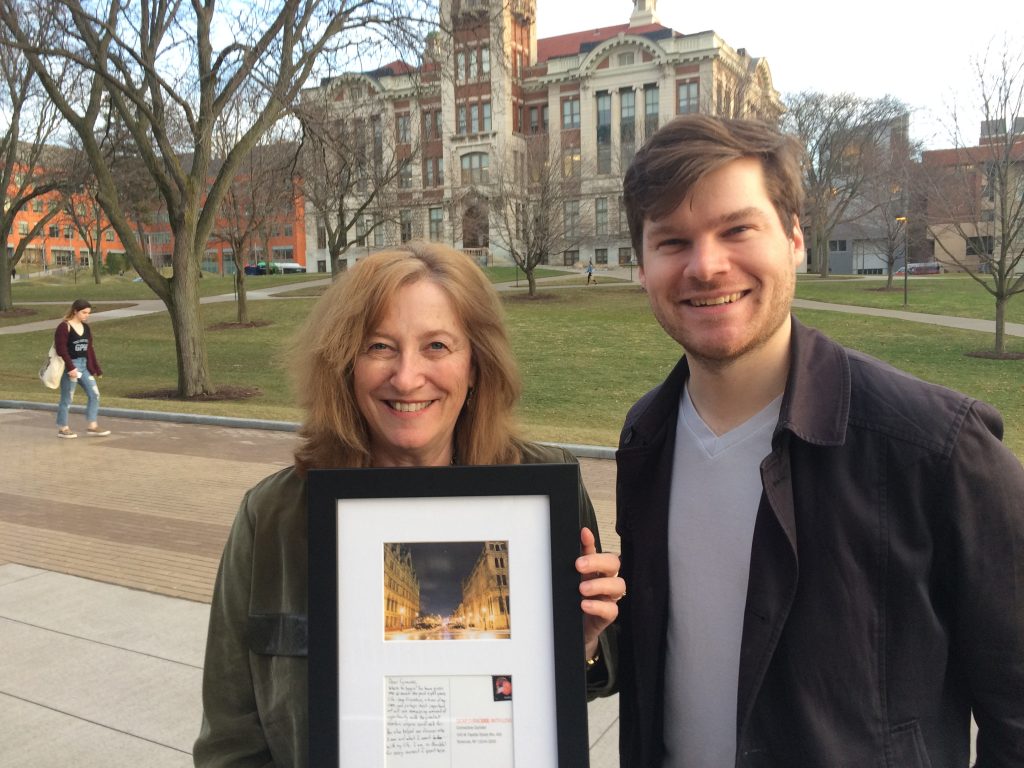 Linda Dickerson Hartsock holds the framed postcard message from Quinton Fletchall who brought back the postcard to Syracuse from his new home in Chicago.

Linda Dickerson Hartsock had a simple question for Quinton Fletchall. Hartsock, now executive director of Blackstone LaunchPad at Syracuse University, worked with Fletchall for a long time during his undergraduate and graduate years in Syracuse.

As director of the Connective Corridor, she was his supervisor when he took over a University-sponsored project in the city: It was Fletchall’s job to sort through what he called the “Dear Syracuse, with love” initiative. He asked students, children and other city residents to write brief postcard messages, explaining why they loved the community. Fletchall chose what he saw as the most memorable ones. They were posted on a prominent downtown billboard along West Street, where thousands of travelers could see them every day.

The idea, Hartsock says, was taking on what her students believed was a civic tendency to minimize the quiet strengths of the city. Fletchall was in charge of the project for a year. Hartsock quietly watched and admired Fletchall’s transformation, how a young man from Iowa with no connection to Central New York gradually established a passion for being here.

Fletchall came to the University at 18, with no plans to stay a day past beyond graduation. He ended up remaining in Syracuse until he was 26. Maybe a year ago, as he worked on the billboard project, Hartsock asked when he’d write his own postcard message to Syracuse.

He told her: “When I say goodbye.”

A postcard from the “Dear Syracuse, with love” initiative

He is working now with a design firm in Chicago. He left for that position because it is closer to his childhood home, and because it offered the kind of work he loves to do, and because he is in his 20s and simply wants to explore the world.

“I thought it was just time for a change,” he says. Yet he climbed on a train last month and took the 13-hour ride for a quick weekend in Syracuse. He says he needed to do it for one main reason:

He had promised to say thanks.

“If you’d talked to the 18-year-old me, and told me I was going to spend so many years in Syracuse, I would have laughed at you,” Fletchall says. “As someone not from Syracuse, I had heard a lot of negative conversation about the city. But it’s a gorgeous region. I got to see the city in a new light. It has its own aesthetic and feel, and I really enjoyed the entire experience.”

After living in the dormitories or other student housing, Fletchall eventually moved to Armory Square, a downtown neighborhood. He began to understand the larger mesh of the campus and the community surrounding it, and he fell in love with the beauty of the Finger Lakes and the Onondaga Valley.

He stayed on after earning his undergraduate diploma to complete a master’s degree in communication and rhetorical studies. He worked on the Connective Corridor and spent a summer with the Near Westside Initiative, an effort to lift up a core neighborhood in Syracuse without displacing the people who live there.

After finishing his master’s work, he launched his own design company, called “Inquiry,” and became an adjunct faculty member with the School of Design in the College of Visual and Performing Arts.

One morning, he woke up and realized he’d spent more than a third of his life in Syracuse. When the opportunity arrived in Chicago, he embraced it. Still, Fletchall saw the University—and the city itself—as transformational.

In that experience, Hartsock says, he is hardly alone.

“I think he is emblematic of an entire cohort of students who come here with a set of fresh eyes,” she says. “They see this community for what it is—this nice, warm, friendly, walkable community—and they’re eager to connect.”

Fletchall says the “Dear Syracuse, with love” project was a chance to underline the point. The goal was  reminding people of community strengths that are easy to overlook. Asked for a favorite, he hesitates. All the messages were sincere, and some came from children, and no single one seemed more important than any other.

But if he had to choose one message as symbolic, he says, it was from a young woman named Caitlin, a message he juxtaposed on the billboard with a beautiful winter image of Clinton Square:

One of Fletchall’s favorite postcards

Last autumn, Fletchall received the job offer in Chicago. He packed up and left in January, but that moment was not his true goodbye. He had some things he needed to prepare, and he brought them back on his train ride to Syracuse. They were gifts for the friends and educators who changed his life.

For Hartsock, he brought a framed postcard she plans to hang on her office wall. She is the caretaker, but the message is really for all of Syracuse, and it gives words to a feeling shared by generations of graduates.

“Where to begin? You have given me so much the past eight years; lifelong friendships, a home of my own and perhaps, most important of all, an amazing amount of opportunity with the greatest mentors anyone could ask for. You also helped me discover who I am and what I want to do with my life. I am so thankful for every moment I spent here.

“Now, although our paths are diverging, I know my service to you is not finished. This faithful son will be ready to answer the call. I will never forget you, and wherever I go you will always be a home to me.”

It is a love letter to an education, and a community, and the two becoming one. 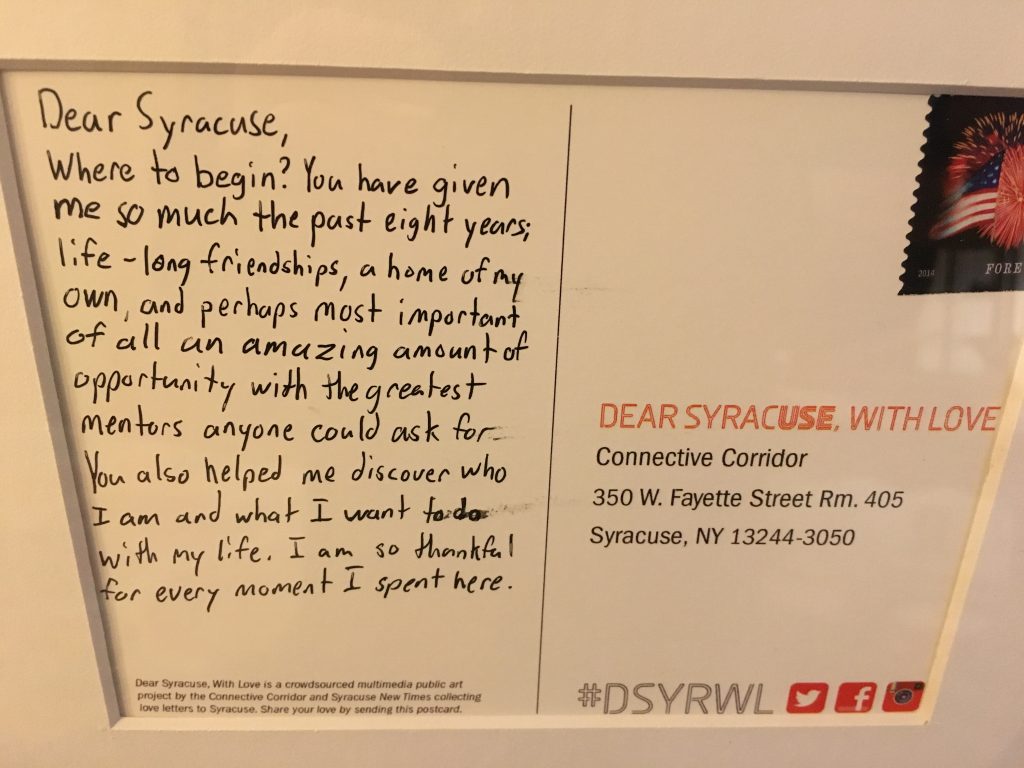 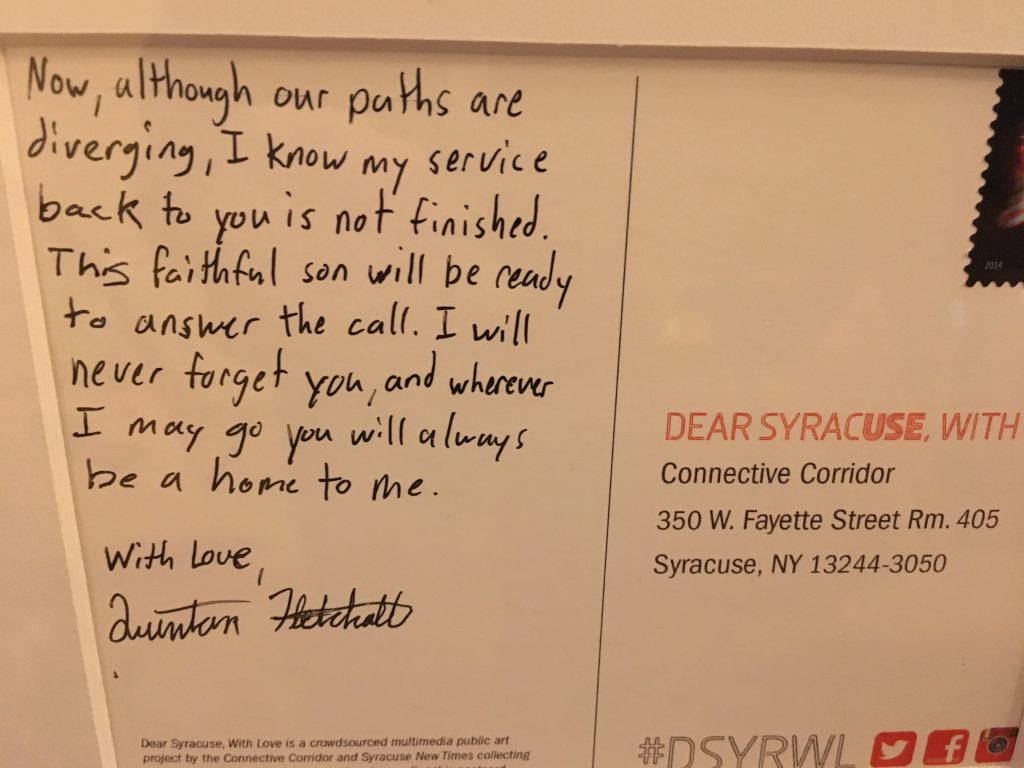