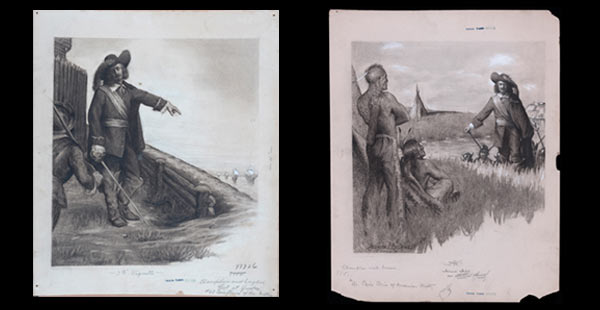 The Special Collections Research Center at Syracuse University Libraries has made a significant find—two original Norman Rockwell illustrations. They represent the artist’s first commercial commission, created in 1911 during his initial years of study at the Art Students League of New York. Located in the records of the American Book Co., the illustrations are among the earliest existing original works by an artist revered for his iconic images of America.

The American Book Co. was a national educational book publisher active throughout the 19th and 20th centuries, perhaps best known for its series of McGuffey Readers, which sold 120 million copies between 1836 and 1960. The Special Collections Research Center holds the correspondence, calendars, business records, books, illustrations, photographs and drawings of the publishing house. Other noteworthy artists represented in the collection include Frederick Remington, Thomas and Peter Moran, and Martin Lewis.

“We know that the Special Collections Research Center holds some of the most significant cultural artifacts of the 20th century,” says Senior Director Lucy Mulroney. “And we have made it our top priority to preserve these collections and share them broadly with the campus community and scholars worldwide.”

Beginning in March 2016, the Special Collections Research Center began a major preservation project to rehouse the some 20,000 original illustrations in the collection, created between 1801 and 1964. “When I first joined the team at the Special Collections Research Center, I made the American Book Co. Records one of my first priorities,” says Andrew Saluti, chief curator of exhibitions, programs, and education, whose research led to the discovery and pedigree of the drawings.

The 17-year-old Rockwell was assigned five scenes for Fanny Coe’s history text, “Founders of Our Country,” illustrating Samuel de Champlain’s expeditions to the new world. Only two were chosen to be reproduced in the textbook. The novice Rockwell also received critical feedback on one of the selected illustrations and was asked to redraw the scene. Saluti explains, “This job had a formidable impact on Rockwell­. The consequence of this experience was a resolution to never let any work leave his studio without vigorous review. Rockwell became renowned for his meticulous and painstaking approach to crafting his scenes.”

Following the thread through business ledgers, archival contracts and early correspondence, Saluti was able to identify a single brown paper parcel—one of hundreds currently being processed—as the possible location of the Rockwell illustrations. Together with archivist Sebastian Modrow, the drawings were unearthed, and a longtime University legend became reality.

“This is a major discovery,” says Mulroney, “not only for Special Collections and Syracuse University, but also for the scholarship on Rockwell’s artistic development.” An article exploring the discovery and relevance of these works will be published, and an exhibition focused on the American Book Co. illustrations is in development for the Special Collections Research Center in 2018.