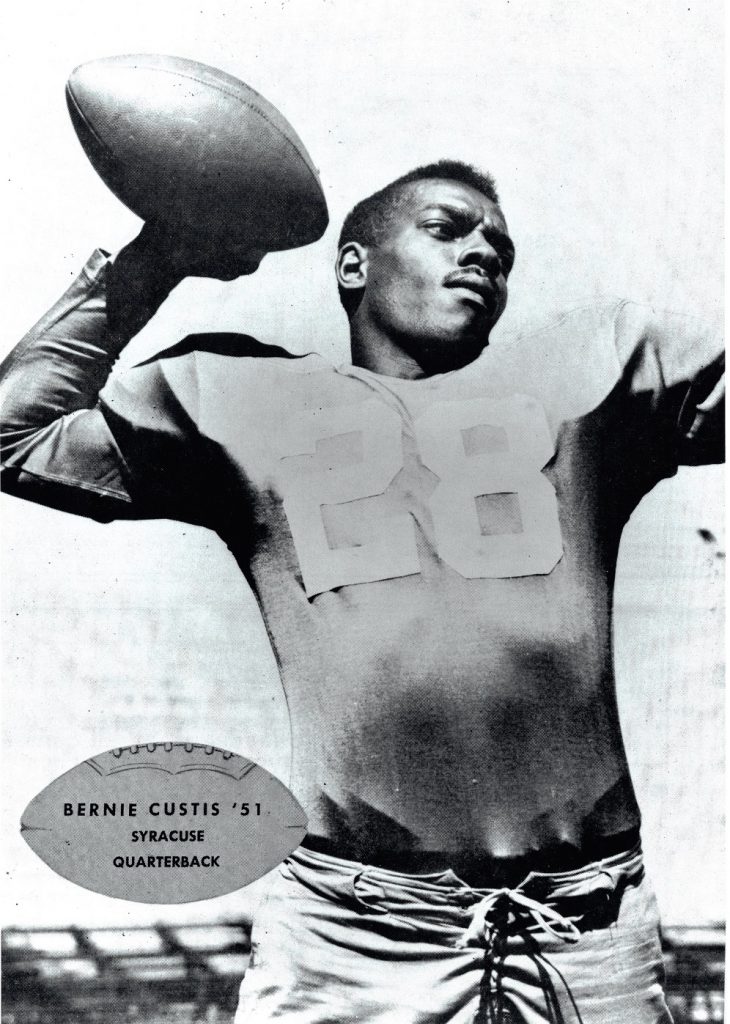 It was just one game in a season few remember, a furious comeback that on paper came up a little short.

Still, if you want to fully consider what Bernie Custis meant to Syracuse University, you can find a vivid capsule in a 34-28 Orange loss to Columbia University at the end of the 1948 season.

Custis, whose death last week at 88 received national attention, was a sophomore on that team. The Columbia game was the finale to Coach Reeves “Ribs” Baysinger’s two-year coaching career at Syracuse. A new head coach, Floyd “Ben” Schwartzwalder, would take over in 1949. He would lead the program for more than 20 years, a period that would reach its crescendo with a national championship, in 1959.

Yet forget wins and losses. Set against the larger landscape, what Custis accomplished at Syracuse in 1948—and for the next two seasons—was staggering. He was an African American quarterback in a nation that had yet to recognize the equality of blacks, legally or otherwise. Within the city borders of Syracuse itself, there were no public schoolteachers or police officers of color in 1948; many businesses still refused to offer services to blacks.

That was only one year after Jackie Robinson became the target of racial venom for shattering baseball’s color line with the Brooklyn Dodgers. Despite that era, Custis began the 1948 season as the 19-year-old leader of a Syracuse team that included many players much older than he was, players who returned to college on the G.I. Bill after World War II.

“Oh, Bernie,” says Mary Schiffner, 92, now of New Jersey, who remembers him with deep affection. “He was a great guy, a good quarterback, and compared to a lot of the other guys, he was very young.”

Mary is the widow of Bob Schiffner, a receiver and a co-captain on that Syracuse team. Bob was a combat veteran who served as a paratrooper in the Pacific theater. The war, Mary Schiffner says, “took our youth away, but we still lived at a fine time.” The joys of college life carried full perspective, after the sorrow of the war.

She and Bob were already married during those postwar years; one of their sons was born in Syracuse. While Bob played football, the couple lived in a prefab trailer at Skytop, part of a sprawling community of student veterans. To help make ends meet, Mary worked as a nurse in the University infirmary, and she attended many of the football games.

Mary was there, in New York City, for Bob’s last game in the season finale against Columbia. She watched as Syracuse fell far behind, before Custis led a furious comeback that came up just short.

And she remembers why her husband was so upset, once the team returned to campus. 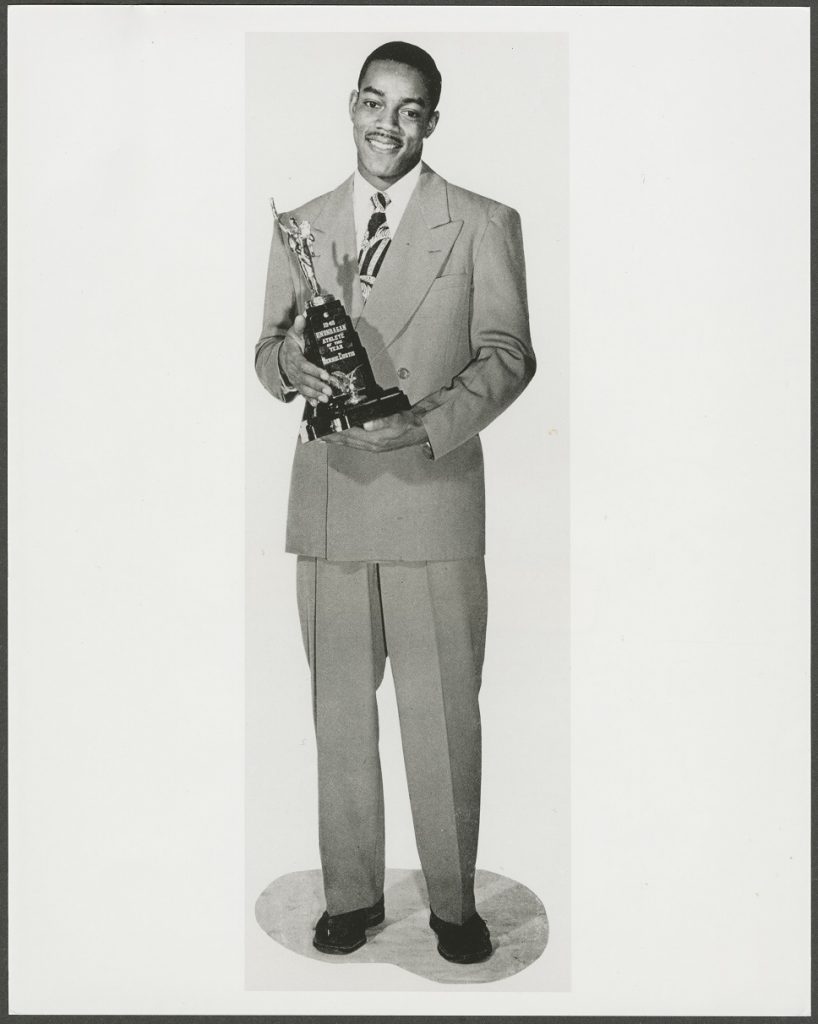 Custis was the second African-American to play quarterback for Syracuse. The first was Wilmeth Sidath-Singh, a standout in both football and basketball. During the war, he became a pilot with the all-black Tuskegee Airmen in the segregated military, where he lost his life in a training accident.

As a pioneer at Syracuse, Sidat-Singh shouldered many burdens. In his junior season, Maryland refused to play against the Orange unless Sidat-Singh was benched. His teammates remembered how he was sometimes barred from businesses, even in downtown Syracuse, where they could get a drink or a sandwich without problems.

Ray Adams, 87, played tackle on the 1948 team. He says Custis and Horace Morris—a senior lineman who in 1946 became the first African-American since Sidat-Singh on the Syracuse varsity—were embraced by the rest of the team. Adams remembers that Custis sometimes roomed with Leon Cohen, a Jewish teammate, which led Adams to joke with them that they maintained a “temperance room,” a symbol of tolerance.

“He was a nice guy, a gentleman, unassuming,” Adams says of Custis. “And he could throw the ball 65 yards.”

As that season began, Custis was in the spotlight. While local sportswriters would occasionally refer to Custis as “dusky,” or remind readers that he was “a Negro sophomore,” most of the attention was focused on his array of skills: Even as a teenager, he was a team leader who played offense and defense, a guy who could read the field, pass, run and tackle.

All of that went on prominent display in the second half against Columbia, in front of writers from some of the nation’s largest papers. Syracuse came into the game at 1-7, a heavy underdog even though Columbia was only 3-5. The full extent of the despair was summarized by this headline in The Post-Standard: “Orange Hopes Lie in Bad Weather.”

For much of the contest, that grim outlook seemed justified. With five minutes to go in the third quarter, another Columbia touchdown put Syracuse in a deep 27-14 hole. Custis responded with an electrifying performance that nearly pulled out a victory.

Few people beyond his teammates understood the depth of his motivation, how he and Morris had been confronted with an insulting rejection in New York, only a few nights earlier.

It is closing in on 70 years since that incident occurred. When Syracuse arrived in New York City, Ray Adams says, the players walked in the front door of a fine hotel on the Grand Concourse, in the Bronx, weary and prepared to settle in for the night.

The hotel managers were startled to see Custis and Morris. Adams recalls how they told Baysinger that the rest of the team was welcome, but the hotel would not accept African-American players. “They said the two black guys can’t stay here,” Adams says. “And Ribs Baysinger said to them: ‘If those two can’t stay here, none of us stay here.’ So the management changed its tune.”

Adams says he is sure of that memory, that he was nearby when the conversation happened and hotel managers gave in. As for Mary Schiffner, she says her husband was upset when he returned from the Columbia trip. He told her that Custis and Morris were barred from staying with the team at one point, and that the players didn’t learn about it until afterward.

He told Mary that as a co-captain he wouldn’t have tolerated it, and the other players would have supported their teammates, if they’d known.

Maybe there was more than one incident before that game; Larry Martin, a retired University associate vice president, recalls how Morris once told him about a road trip where he was initially barred from a team event at a country club near New York. In any case, both stories underline the regular struggles for players of color, in 1948.

What is clear is this: The one place where Custis could make a point about full equality was on the football field. The Onondagan, the school yearbook, noted how Custis started the Syracuse comeback against Columbia by returning a kickoff 25 yards, a duty unheard of for a quarterback today. Custis then completed five passes on a long drive that carried Syracuse to a fourth-and-seven on the Columbia 10-yard-line.

Facing do-or-die pressure, Custis promptly looked for running back George Davis, who seemed to be in the end zone when he caught the ball. Orange fans were aghast when no touchdown was called, and the ball was spotted instead at the half-yard line. But Davis—who went on to be a fine high school and college coach—quickly carried it in, pulling Syracuse within six points.

With 12 minutes to play, the Orange regained possession and Custis went back to work. Often turning to the “jump pass” for which he was renowned, he made connections with Schiffner, Ed Urban and Harry Nussbaum. The Orange rolled down the field. Finally, a Davis plunge over left guard gave Syracuse a stunning 28-27 lead and a shot at the upset.

If anyone wanted to dispute the merits of an African-American quarterback, Custis—a 20-year-old playing before national media—made the arguments look ridiculous. He turned in a sequence of beautiful plays, with no room for error. Even when Columbia rallied for one last touchdown to win the game, Custis put together another drive that fell short only in the waning moments.

As Bill Reddy, sports columnist at The Post-Standard, noted afterwards:

“Metropolitan sportswriters were lavish in their praise of Bernie Custis, sophomore pass master whose passing or running set up all four of the Syracuse touchdowns.”

Those accomplishments weren’t enough to overcome racial barriers. After college, Custis decided against playing for the Cleveland Browns when he realized he’d have no chance to be a quarterback in the National Football League. Instead, he joined the Hamilton Tiger Cats of the Canadian Football League, where—as noted in The New York Times—many historians believe he was the first black quarterback in professional football’s modern history.

After football, Custis would eventually serve as an elementary school principal. But today, with the passing of so many contemporaries, his achievements in Syracuse are fading in memory. John Brown, a retired banking executive and an African-American lineman on Schwartzwalder’s 1959 national championship team, said it is critically important to remember the kind of obstacles and humiliations that such groundbreakers as Custis routinely overcame.

Their courage, Brown says, created opportunities for ongoing generations of young African-Americans. The tale about the hotel is only an illustration of the hurts they endured. It is a point Brown makes as a tribute to Custis, with hope that his perseverance will still resonate for students of color.

“I was there years later, and we heard about what a great athlete (Custis) was,” Brown says. “You look back on it—a black quarterback in 1948?—and I’m surprised they even let him play. I’m not sure the young men at Syracuse today fully understand what a Bernie Custis or a Horace Morris or a Billy Haskins or an Avatus Stone endured on their behalf.

“You look at the team now, and I’ll say this: Those guys who came up before us, they had a building block effect that helped all of us. When I hear about what they went through, all I can say: Because of them, we were lucky. They helped to bring us here.”