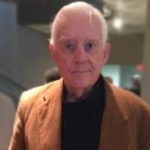 A few days after Samuel Clemence was named co-chair of the committee charged with conducting a comprehensive review of Hendricks Chapel, former Department of Religion chair James B. Wiggins called him. “He offered me a copy of his report from 1980,” Clemence says. In early 2016, 15 years after retirement, Wiggins “was still invested in the University and in Hendricks Chapel.”

Wiggins, Eliphalet Remington Professor of Religion Emeritus and religion department chair from 1980 to 2000, died Feb. 20 at his Syracuse home. He was 83. A memorial service is set for Saturday, March 4, 11 a.m. at University United Methodist Church, 1085 E. Genesee St., Syracuse.

In his 38-year Syracuse career, Wiggins served as director of graduate studies in religion, interim dean of Hendricks Chapel, University senator and University marshal. After retiring in 2001, he served as executive director of InterFaith Works of Central New York (formerly the Interreligious Council of Central New York) and was active in several civic and faith organizations. He is remembered by colleagues and friends for his dedication to the University and his lifelong advocacy for religious study as a way to understand others.

“Jim Wiggins was a friend and counselor to me and many Syracuse Chancellors, as well as a distinguished scholar, department chair and interim dean of Hendricks Chapel,” Chancellor Kent Syverud says. “He cared deeply about the people in this institution and in the city and region. I count myself fortunate that our times at Syracuse overlapped.”

Wiggins chaired the Hendricks review committee in 1979-80, in advance of the chapel’s 50th anniversary and amid a sometimes-contentious debate about the facility’s role on campus. Then Chancellor Melvin Eggers accepted the seven recommendations of the so-called Wiggins Committee. Changes included placing the chapel under the administrative direction of the chancellor, creating an advisory board for religious affairs, and encouraging more coordination among denominational chaplains. The committee also recommended that the chapel dean no longer serve as Protestant chaplain, but oversee the chapel’s programs, facilities and staff.

“He really served at a critical time in the history of Hendricks Chapel,” says Clemence, interim dean of Hendricks Chapel, longtime member of the University’s Spiritual Life Council and professor emeritus of civil and environmental engineering. “His recommendations set the course for the chapel over this many years. His work was pivotal in making the chapel a significant presence on campus.”

Wiggins, ordained as a United Methodist minister, came to Syracuse in 1963 after earning a Ph.D. at Drew University. A native of Texas who never lost his drawl, he was an expert in Western religion and culture. His many publications include “Religion as Story” (Harper & Row, 1975) and “In Praise of Religious Diversity” (Routledge, 1996). From 1983 until 1992, he served as executive director of the American Academy of Religion (AAR), the largest academic organization dedicated to the study of religion. For several years, he hosted “Religion Matters,” a local public television show.

“In many ways, Jim was the architect of this department. While his particular area was Western religions, his constant emphasis was interreligious understanding and respect,” says Philip Arnold, religion department chair. “He would bring into our department world-renowned academics like David Miller, Huston Smith, Charles Long, Charles Winquist, as well as an impressive stream of visiting luminaries. This all served to place us among the top 15 graduate programs of religion in the United States.”

In May 1980, Wiggins was appointed interim dean of Hendricks Chapel, an assignment he accepted with “considerable trepidation.” In “Hendricks Chapel: Seventy-Five Years of Service” (SU Press, 2005), Wiggins explained the University had long operated with “a clear distinction between the academic study of religion that is the work of the department and the practice of religion that is the task of the chapel.”

As interim dean, Wiggins developed a new appreciation for interfaith relationships. “Real interreligious work is demanding and challenging,” he wrote. “A university chapel setting, however, is one of the most promising and auspicious sites within which to pursue such work just because of its setting in a larger institutional context of open inquiry and serious debate.”

Religion professor Jim Watts, who chaired the department from 2009 to 2015, says Wiggins urged people to recognize not just the commonalities among religions, but to understand and respect their differences as well. “He knew that’s the much harder work,” Watts says.

For Wiggins, interfaith understanding was akin to human understanding. “It was a question of, ‘How are we going to understand each other on this planet or in this local community if we don’t understand different religions?’” Watts says, “He thought this was essential knowledge for understanding ourselves in this world.”

Wiggins’ applied that perspective to his role as AAR executive director, a position he held, while serving as department chair, from 1983 to 1992. “He pushed that organization to broaden its perspective worldwide and across religions traditions,” Watts says.

As director of InterFaith Works from 2002 to 2009, Wiggins is credited with expanding the agency’s community outreach and advocating compassion and understanding in an increasingly diverse world. “He had done the scholarship, but engaging people in interfaith work is different,” Watts says. “It became a personal mission for him after he retired. He felt it deeply in many ways.”

Richard Pilgrim, associate professor emeritus of Religion and Wiggins’ successor as chair, praised his colleague’s advocacy for the study of religion. “He was very effective in making our department, especially the graduate program, better known,” Pilgrim says. “Because of his close association with the AAR, our program shined a little brighter in the academic world.”

From 2009 until 2016, Jim Wiggins served as director for youth development programs at First Tee Syracuse. Wiggins was responsible for organization and oversight of the First Tee curriculum, which promotes core values such as honesty, integrity and responsibility through the game of golf. He provided mentorship and guidance to the many young people served by First Tee.

A few weeks before his death, Wiggins penned three brief essays for “CNY Inspirations,” a Syracuse.com feature coordinated by Interfaith Works. “Teachers of compassion consistently recommend making a commitment daily to perform some act that demonstrates compassion to the point that doing so becomes a habit,” he wrote. “Giving such gifts is transformative. For those with eyes trained by practice to see, opportunities to act compassionately are all around us.”