Light Work to Exhibit Eric Gottesman: ‘If I Could See Your Face, I Would Not Need Food (Ka Fitfitu Feetu)’ 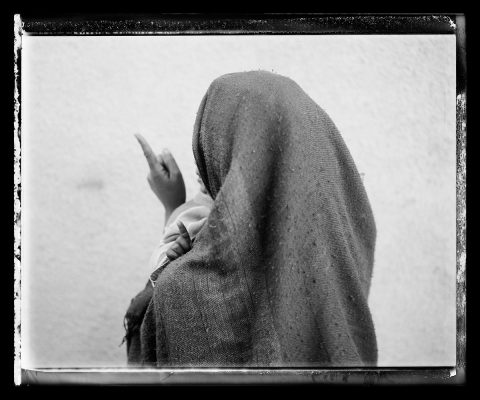 Eric Gottesman: “If I Could See Your Face, I Would Not Need Food (Ka Fitfitu Feetu),” will be on view in the Light Work Hallway Gallery from March 20 through July 27.

Light Work will present Eric Gottesman: “If I Could See Your Face, I Would Not Need Food (Ka Fitfitu Feetu),” on view in the Light Work Hallway Gallery from March 20 through July 27. A reception in conjunction with George Awde: “Scale Without Measure” will take place on Friday, April 14, from 5-7 pm. Refreshments will be served; the event is free and open to the public.

In 1999, artist Eric Gottesman began making portraits in Ethiopia of people with the human immunodeficiency virus (HIV). Because great stigma surrounds this disease, subjects did not allow him to photograph their faces. Over the next five years, Gottesman made these portraits of people with HIV anonymous by hiding and obscuring their faces and changing each sitter’s name to protect their identity. A transcribed text from each sitter describing life with HIV in Ethiopia accompanies each image. In 2004, a woman with HIV allowed him to photograph her face for the first time and he knew the project was completed.

Eric Gottesman photographs, writes, makes videos, teaches and uses art as a vehicle to engage people in critical conversations about the social structures that surround both them and him. Named a 2015 Creative Capital Artist, he has previously won other grants and awards, among them a Fulbright Fellowship, an Artadia Award, a Light Work Residency, the Aaron Siskind Foundation Artist Fellowship and a Massachusetts Cultural Council Individual Artist Fellowship.

His work is in various collections including the Museum of Fine Arts, Boston. In 2014, his first book, “Sudden Flowers,” was published. He co-founded For Freedoms, the first artist-run Super PAC, and is currently a visiting associate professor in film, photography and video at Hampshire College, a visiting professor at Addis Ababa University School of Fine Arts and a mentor in the Arab Documentary Photography Project.