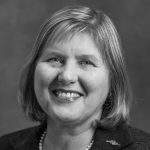 In commemoration of National Professional Social Work Month during March, the School of Social Work in the Falk College will present its annual Dan and Mary Lou Rubenstein Social Justice Award program on Monday, March 6, at 6:45 p.m. in Heroy Auditorium. The event is free and open to the public, and will include a keynote address by Beth Broadway titled “Building Bridges of Understanding in a Divided Time—Challenges Facing Immigrants and Refugees, and How Our Community Can Help.”

Broadway is president and CEO of InterFaith Works of CNY, who, along with Clifford Ryans, founder of O.G.’s Against Gun Violence, will be honored that evening with 2017 Dan and Mary Lou Rubenstein Social Justice Awards for their respective demonstrated commitments to service and social justice in the Syracuse community. Presented for more than 30 years, the Rubenstein Social Justice Award is given in honor of the late professor Dan Rubenstein, a former faculty member in the School of Social Work and his late wife, Mary Lou, a former school social worker.

Broadway leads programs at InterFaith Works that use service, education and dialogue to build bridges in a divided world and to provide comfort to frail elderly people; job opportunities to healthy seniors; refugee resettlement; chaplains in jails, hospitals and nursing homes; and dialogues between people of different backgrounds. She previously led the Community Wide Dialogue to End Racism and is the designer and facilitator of The Leadership Classroom that trains and equips individuals to improve city neighborhoods. 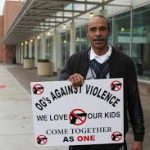 Ryans founded O.G.’s Against Gun Violence to help reduce community violence. He works tirelessly to educate young children about the perils of violence, guns and gangs through presentations at schools, local events and rallies. With a deep commitment and courage driven by his personal experience of losing a son to gun violence, Ryans shared his experiences as a featured panelist at the School of Social Work’s James L. Stone Annual Legislative Policy Symposium that focused on gun violence as it relates to trauma, community relations and racial justice.

For more information about the March 6 program and to R.S.V.P., contact the School of Social Work at ljmarra@syr.edu.