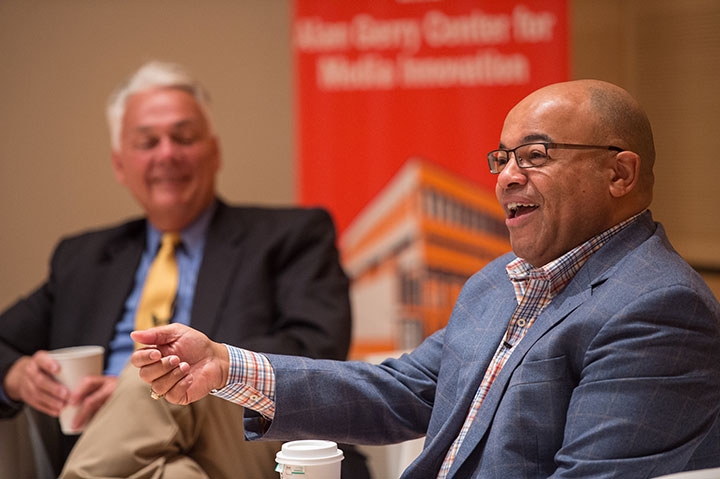 Tirico visited the Newhouse School’s Joyce Hergenhan Auditorium to take questions from students and discuss his career, the Olympics and the sports media industry. Before the Q&A, however, Tirico took some time to talk about the importance of Syracuse’s win.

As a host and play-by-play announcer at NBC Sports, Tirico has covered pro and college football, the 2016 US Open and the 2016 Rio Olympics. Earlier this month, NBC announced that Tirico would be taking over the main Olympics hosting role from fellow Newhouse alumnus Bob Costas ’74 at the 2018 Pyeongchang Winter Olympic Games.

Tirico has been a sports journalist for nearly 30 years, spending most of his career at ESPN before moving to NBC in 2016. One of the keys to his success as a sportscaster, Tirico said, is his versatility. The large volume of sports on TV requires most sportscasters to cover multiple sports.

“It’s like having 14 golf clubs in your bag and being able to hit with every single one,” Tirico said.

Although the basic preparation for covering different sports is the same, Tirico said awareness of every sport’s nuances is important.

Covering tennis for the first time was a challenge for Tirico because he needed to know the game’s complete history, all of its rules and the correct pronunciation of every player’s name, many of whom came from Eastern Europe.

“You have to get things right so you don’t sound like the football guy calling tennis,” Tirico said. “When you get thrown into something, you have to act like you’ve been there before.” 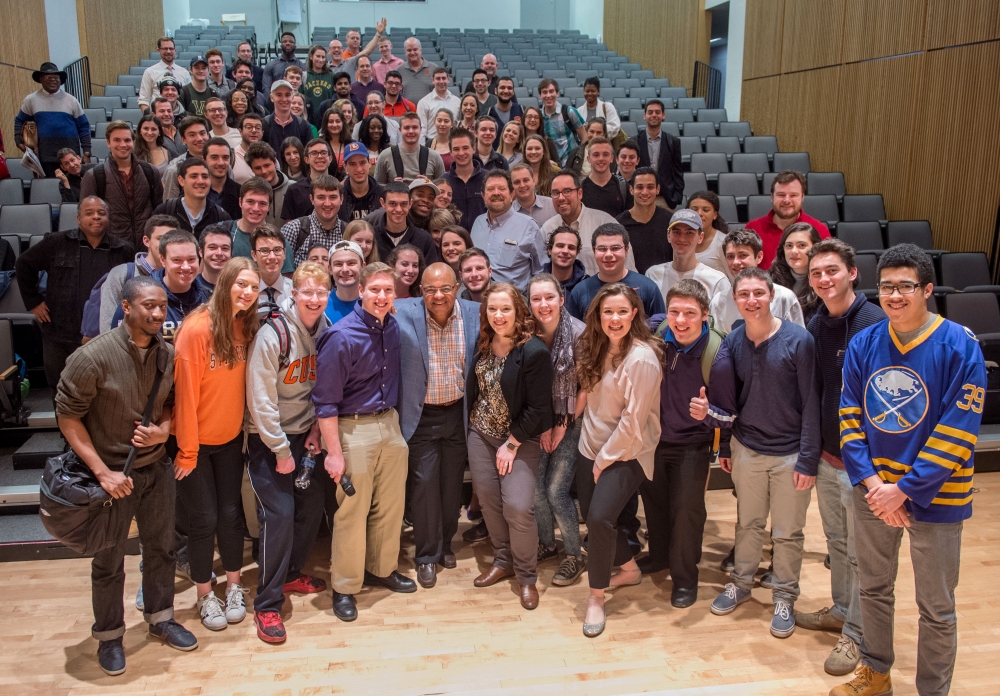 Tirico’s next challenge will be the Pyeongchang Olympics, which begin next February in South Korea. Tirico, who has never covered the Winter Olympics before, said he will begin to prepare for Pyeongchang in the coming weeks.

Although Tirico will be taking over Costas’s role as the main host of the Olympics, he said he doesn’t think of himself as Costas’s replacement.

“I say I’m following Bob, not replacing,” Tirico said. “He’s one-of-a-kind talent, and if I tried to be Bob, I would fail.”

The conversation soon turned to the future of sports media and the use of instant replay when reviewing calls in the NFL. Tirico said changes to the NFL’s instant replay rules can give the replay producer control of the game.

Tirico gave an example of how the new replay rules could have affected Super Bowl LI. With two minutes remaining in the game, instant replay was needed to determine whether or not Patriots wide receiver Julian Edelman had made a catch. Confident he caught the ball, Edelman signaled his teammates to quickly begin the next play before the opposing Falcons could view the instant replay and decide whether to challenge the call.

“I cannot see having the TV people have that kind of impact on the game,” he said. “It’s dumb.”

Although Tirico’s career has been in sports journalism, he said he gets angry when he sees attacks on other parts of the media. Tirico believes the First Amendment, which gives Americans the right to free speech, is the most important section of the Bill of Rights.

He told the audience, most of whom were students, that now is the best time to be learning about journalism.

Tirico said students angered by attacks on the media should strive to report with accuracy and quality—whether they are reporting on a feature story, sports or politics.

Story by Jordan Muller, a freshman newspaper and online journalism major at the Newhouse School