History-maker at University College: Single Mom, Odds Set Against Her, Flies Past Barriers 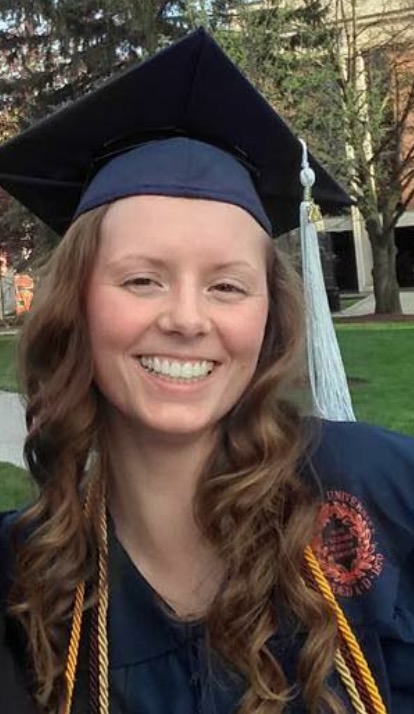 Tani Huddleson finds strength by remembering the hardest point. She was barely 16, a single mother with a newborn child in Mattydale, a gritty working community just north of Syracuse. She had dropped out of high school to care for her baby, and Huddleson needed a job.

At first, no one would hire her.

That was nine years ago. She recalls one night when the power was shut off because the bill hadn’t been paid, and she had to go to an aunt’s house to shower. Today, when friends endure similar trials, when she meets young mothers who believe all ways forward are closed off, Huddleson offers this advice:

Those three words are not simply encouragement. They are her story.

Huddleson, 25, is a graduate student at Syracuse University. She commutes each week to spend a few days in Virginia, where she is doing an internship for the Department of Justice. She is on track to earn her master’s degree this summer in forensic science, which represents a stunning, even historic, Syracuse trajectory:

In 2012, Huddleson enrolled at University College, which offers classes for part-time students who often have other obligations. She was already working at a Dunkin Donuts in North Syracuse while raising her son, John, who had yet to start kindergarten.

Huddleson walked the stage as an undergraduate last May, which leaves Rosemary Kelly, an assistant dean, and Marsha Senior, director of the Higher Education Opportunity Program at Syracuse, to emphasize this point:

“In my memory,” Kelly says of University College, “I don’t remember a student coming here needing four years (of credits) who finished in four years.”

In other words, Huddleson—a single mother with a full-time job—took advantage of every opportunity. She used summer sessions to add credits and graduated with a double major in forensic science and psychology. University administrators cannot recall anyone else in that situation doing it so quickly. It would have been historic under any conditions, but consider this:

“She is probably the hardest-working student I’ve ever encountered,” said Suzanne Spinola, who taught Huddleson in an undergraduate drugs and behavior class and later became her research mentor—and a friend. Spinola is now a doctoral candidate whose thesis has been accepted for publication. Huddleson’s role?

Spinola’s paper lists her as co-author.

“What struck me about her was that she was always so determined, and she always followed through,” says Joey Tse, now of SUNY Oswego, who worked closely with Huddleson as her advisor at University College.

A decade ago, Huddleson was a self-described “troubled youth.” Her parents had separated, and Huddleson and her sister Sasha were raised by their mother. Huddleson said she inherited her work ethic from Kimberly Huddleson, who had a full-time day job involving medical records at a hospital and then worked two other jobs, cleaning offices and helping at a gym, at nights and on weekends.

Today, to Huddleson, her mother’s diligence is sheer inspiration. In her teenage years in Mattydale, it meant opportunity. As a little girl, she’d always earned high grades. But in middle school, she began sneaking out at night to “party” with her friends. She became romantically involved with a boy.

Before long, that was no longer possible. At 15, while in the 10th grade, she learned she was pregnant. The relationship with the young man didn’t last.

As soon as she could do it, she quit school to care for her son.

Looking back on it, Huddleson says, the birth nine years ago of little John Wilkins was the greatest thing that could have happened. To her, he never symbolized struggle: He represented hope. She would hold him or read to him on the nights when they were broke, when the bills seemed impossible to pay, and she made a promise:

“You won’t go through a life like this. I’m going to make your life amazing.”

At a McDonalds restaurant one night, she saw a sign that said the place was looking for help. Huddleson applied and was hired. She worked at McDonalds for a year, then a took job caring for patients with dementia at a nursing home. From there, she moved on to Dunkin Donuts, where her diligence quickly lifted her into a job as an assistant manager, a position that gave her the flexibility to follow a dream:

She could return to school.

Huddleson was 16 when she took her GED exam through Onondaga-Cortland-Madison BOCES, and aced it. A teacher, Sam Reppi, was impressed enough to tell her to investigate HEOP, which provides collegiate assistance for non-traditional students. 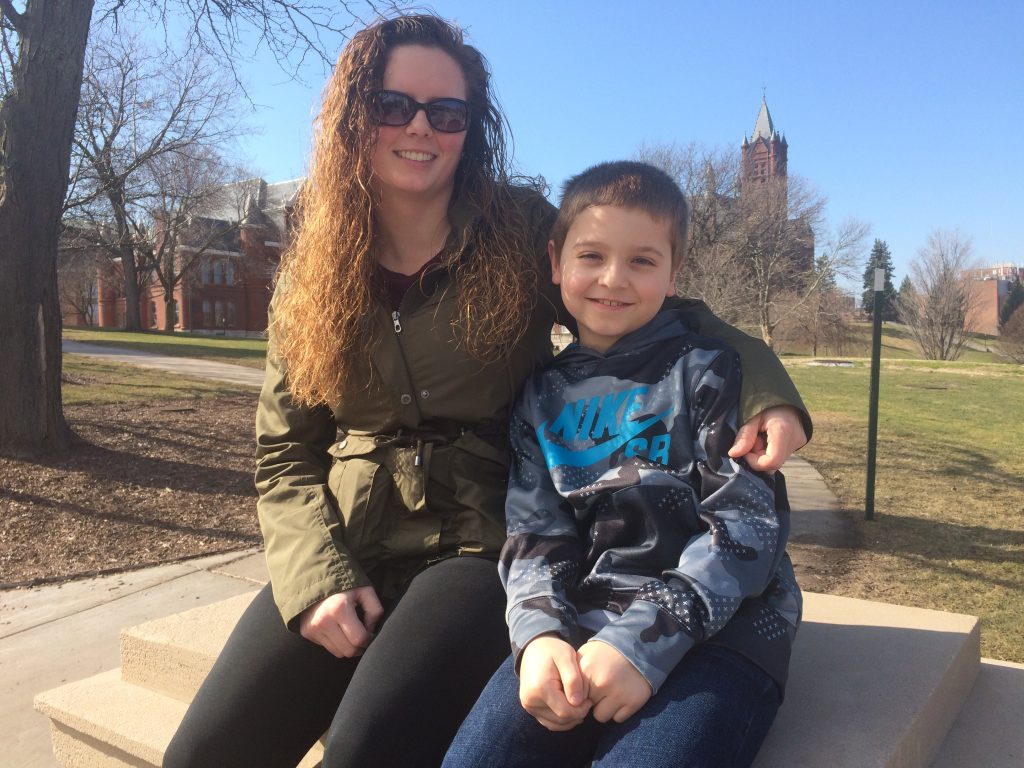 “You see a lot of seedlings come through here, and you encourage them, and sometimes they catch,” Reppi says. He described Huddleson as “an extraordinarily bright kid,” an example of the “superstars” coping with hard times who often enroll in GED classes.

“Think of it,” he said. “Think of what that kid had to overcome.”

At 18, Huddleson met with Mary Pagan, then with the HEOP program at Syracuse. While Huddleson had not been in a traditional classroom since her sophomore year of high school, Pagan, too, saw only potential: With her help, Huddleson enrolled in 2012 at University College and began working toward an associate’s degree.

Five years later, she is on the brink of her master’s at Syracuse University.

“I always knew she was on her way to something good, someplace big,” her mother says.

Ask Huddleson how she did it, and she’ll tell you about her legion of supporters. “There were so many people who spontaneously helped at different points in life,” she says. There was her mother, working three jobs to provide her children with their security. There was her grandmother, Kathy Huddleson, who always read to Huddleson when she was little.

Most important of all, maybe, is her new boyfriend, Joel Large. “He’s just a really good guy,” she says. Large would care for Huddleson’s son when she had classes. At the time they met, he was serving in the Army. When her own car broke down—as it often did—he would make sure she found a way to get to school. 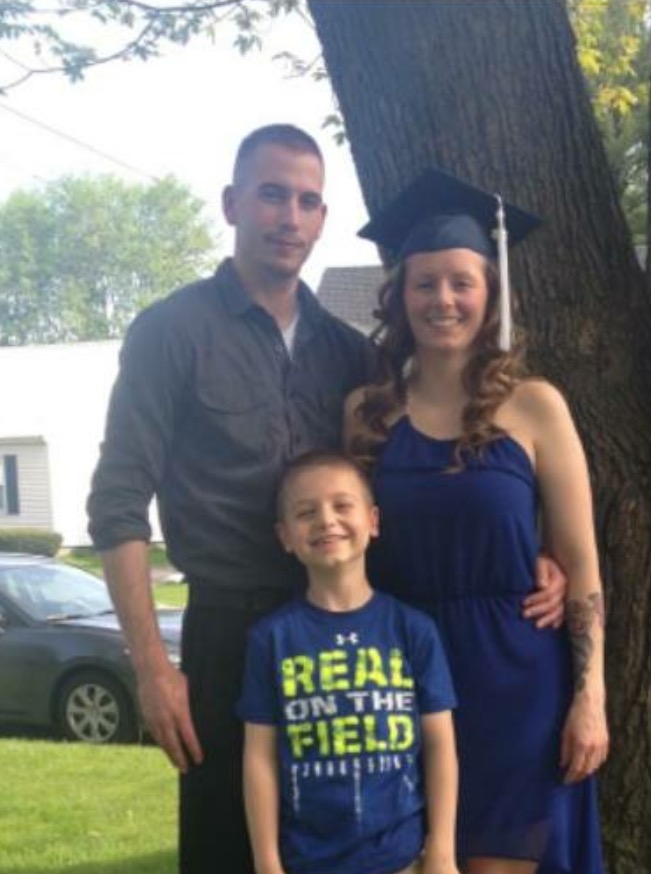 The people who love her say she gives them too much credit. They’ll tell you of the years when Huddleson would go to class, then hurry home to spend as much time as she could with her little boy until she put him to bed. She’d be up by 4 a.m. to do her homework, before punching in for her shift at Dunkin Donuts.

That was her routine for four years. Now she is expecting a child with Joel, a baby she will deliver shortly after she earns a master’s degree, a baby she anticipates will be born into this future:

The single mom who could barely pay her bills at 16 is hoping for a federal job involving forensic science, a job that would allow her to follow her passion while caring for her family. Now in the fourth grade, her son John is already embracing his schoolwork, especially science, and she quietly urges him to dream big dreams.

She intends to give both her children a warm and relaxed life where bill collectors never call on weekend mornings, a life where Huddleson can read to them at leisure before they fall asleep, a life she describes with one word:

The funny thing is, that’s the word the rest of us apply to her.