AAS Professor Renate ‘Rennie’ Simson Remembered for Her Many Contributions 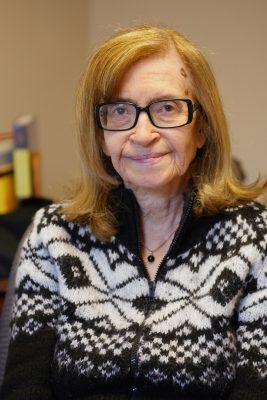 When Renate “Rennie” Simson joined the Syracuse University faculty in 1979 as a full-time instructor, African American studies (AAS) was just being established as a department in the College of Arts and Sciences. It had existed at the University for eight years as a stand-alone program, one that was underfunded and at risk of being discontinued.

She quickly delved in, passionate in her roles as a teacher and in working with her colleagues to build a strong and renowned department. In 1989, she helped to create the 13-Point Document, a set of bylaws that helped the department grow in faculty size, to bring esteemed scholars to campus and to create the master’s degree program in Pan-African studies.

Simson, professor at Syracuse, professor emerita at SUNY Morrisville, and scholar and teacher of 19th-century African American literature, died on Sunday, Feb. 19. She is remembered by her colleagues as a strong champion of the department, her students and her colleagues.

“Professor Simson was dedicated to AAS, her students and the subjects of African American literature, education and critical social justice,” says Herb Ruffin II, associate professor and chair of AAS. She was also a valued colleague who helped to impart important life lessons. “I learned an awful lot from her,” Ruffin says.

“Rennie was a great colleague—someone whose life and work in the field of African American Studies command great respect and admiration,” says Janis Mayes, associate professor of AAS and a close friend of Simson’s. “She thought through decisions, and she cared about the impact a decision might have on the life of the department. … She was trustworthy, forthright, had a great sense of humor.”

Ruffin and Mayes agree that Simson’s real passion was teaching. Ruffin says her African American Literature to 1900: An Introduction (AAS 231) was always filled to capacity. Mayes says Simson loved the elegant teaching of “freedom narratives” or slave narratives; Langston Hughes; and the Black Arts Movement. “Rennie’s signature curricular contribution to AAS is Writing about Black Culture (AAS 138), a course that has grown and flourished over the years,” she says. Simson’s favorite piece of writing, Mayes says, was Dr. Martin Luther King Jr.’s “Letter from a Birmingham Jail.”

Simson’s strong advocacy of scholarship and the AAS department extended out into the greater University, broader communities and even around the world. In her role as the AAS undergraduate studies committee chair, she worked on integrating AAS majors into the University’s Renée Crown University Honors Program. Simson designed her own recruitment program through which students from AAS met and interacted with students from Nottingham High School in Syracuse. “She insisted that her students know about the Syracuse city schools,” Mayes says. And Simson worked to establish graduate and undergraduate exchange programs between Syracuse and the University of Graz in Austria.

A native of Austria, Simson was a longtime member of the Syracuse University family. She earned a bachelor’s degree from the College of Arts and Sciences in 1956 and a Ph.D. from the School of Education in 1974.

She taught at SUNY Morrisville for many years, and chaired the English department there from 1984-93. Simson would transport students from the SU campus to Morrisville on a regular basis to meet and interact with their counterparts there, Mayes says.

Simson served as chair of AAS from 2010-13 and July-December 2016. Her scholarship included the publication of more than 30 articles and chapters, and making more than 50 presentations at conferences throughout the country and in Austria. She published a book in 2008, “Will the Real America Please Stand Up?” on her research on inequalities in New York State public schools.

“Professor Simson played a key role in building the Department of African American Studies into the renowned department it is today,” says Karin Ruhlandt, dean of the College of Arts and Sciences. “The impact she had on scholarship and teaching, and on her students and colleagues, will long be felt in the department, the college and at Syracuse University.”

Beyond her scholarly achievements and love for her students and colleagues, Simson was a person who deeply loved her family and loved life—from visiting the cafes and patisseries in her small hometown in Austria to her season’s tickets to the Metropolitan Opera in New York. “Looking back, this was a season’s ticket for the department,” says Mayes. “She would go to a few concerts and share the rest with colleagues. She loved her family and family gatherings, whether on a lake in the Adirondacks, or beach in Savannah, or mountains in Austria and Switzerland.”

“Rennie strove to live life on her own terms and on the righteous side of history,” Mayes says.

Simson is survived by her children, Thomas and Bonnie, and two grandchildren, Jami and Shannon. She was predeceased by her husband, Brian.

Calling hours will be held Thursday, Feb. 23, from 4-6 p.m. at the Eaton-Tubbs Fayetteville Chapel, 7191 E. Genesee St. in Fayetteville. Services will be private.

Donations in Simson’s memory may be made to Syracuse University’s Department of African American Studies, 200 Sims Hall, Syracuse, NY 13244.