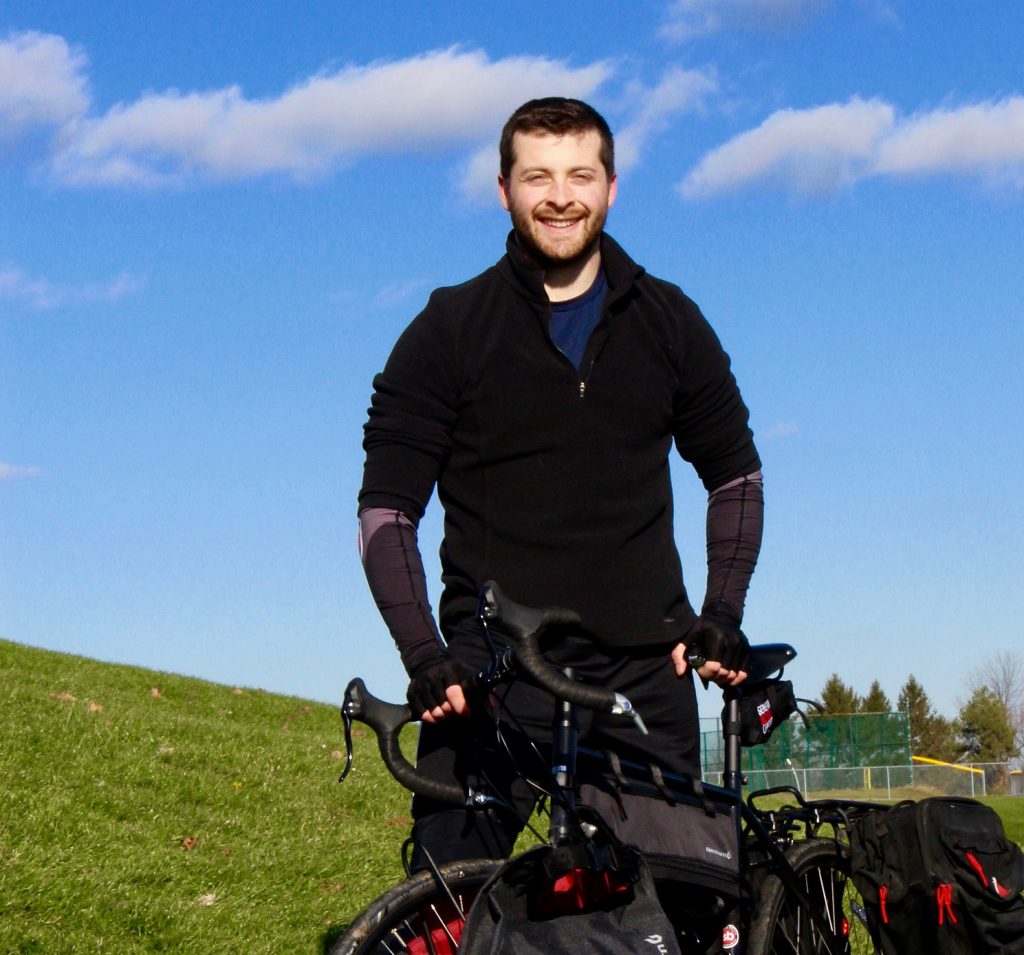 Beginning Feb. 27, Barbaccia will head out on his bike, loaded with gear, from Jacksonville, Florida, to Santa Rosa, California. The Rochester, New York, native will pedal through the continental United States to raise awareness about Parkinson’s disease.

Barbaccia, who completed a co-op at Johnson & Johnson in 2015, finished up his coursework in the College of Engineering and Computer Science in December and will be starting a position with Teach for America (TFA) in June. In between, he wanted to spend his time on something worthwhile.

Originally, the idea was to bike across the country for the experience. With advice and ideas from many people, he decided to dedicate the trip to a special cause.

“When I decided to do this for charity, there was only one cause that came to mind, and that was Parkinson’s disease. This disease has affected my Uncle Mark for over roughly 15 years now and has severely worsened over time. I’ve grown up seeing the progression of his symptoms, and I have always wished there was something I could do,” says Barbaccia, whose grandfather, Andrew Barbaccia Sr., had been diagnosed with Parkinson’s and passed away in 2002. “There are many people whose lives have been touched by Parkinson’s. I know this cause will resonate with them.” 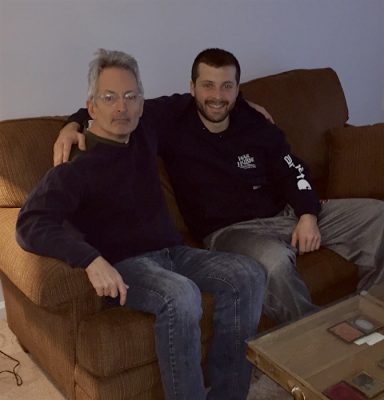 Barbaccia has been putting his plan in place for the past several months: plotting out the route—which includes stops in Dallas and Denver, along with many places along the way—and training.

His website, www.ride4parkinsons.com, where viewers can track his progress, was developed through the assistance of iConsult, a graduate student organization in the School of Information Studies. The team—which included a faculty advisor, project manager and five student web designers and editors—worked with him to build the site. Viewers can track his progress through an interactive map, read daily blogs and catch up with photos and videos, including ones from a drone.

The site also functions to seek donations for The Michael J. Fox Foundation.

“I will be donating 100 percent of my proceeds to The Michael J. Fox Foundation. I think this will get more people on board with the cause, seeing that the MJFF also donates 100 percent of their proceeds to Parkinson’s research,” Barbaccia says. “For me it’s a win-win. I have the opportunity to embark on an adventure that I am sure will challenge me in ways I have never been challenged before, and I am able to raise attention for a meaningful cause simultaneously.”

Along the way, Barbaccia will contact organizations associated with Parkinson’s awareness and biking communities. “If I am successful, I hope to accumulate riders along the way, for however long they wish to ride,” says Barbaccia, whose father is an avid cyclist and inspired him to pursue the bike trip. 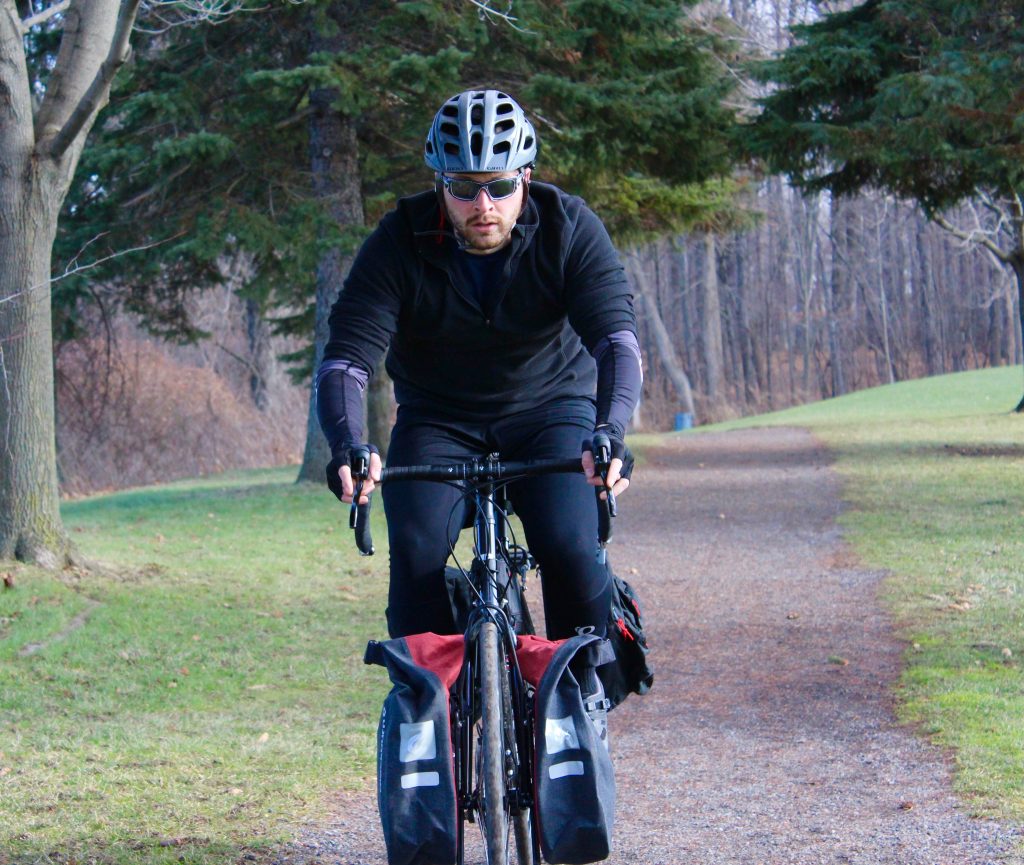 Matt Barbaccia will be donating 100 percent of his proceeds from his cross-country trek to The Michael J. Fox Foundation.

Some stops will be with people who he knows in certain areas. Other stops might be through Warm Showers, a community for touring cyclists that provides shelter for cyclists. As a final back-up, his gear on his Trek 520 includes a tent and sleeping bag, packed in four panniers.

“I will have no assistance, other than what I am able to carry with me on my bike. I want this to be challenging—otherwise it wouldn’t be so meaningful to me,” Barbaccia says. 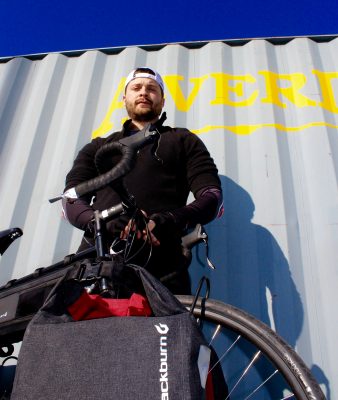 After his cross-country ride, Matt Barbaccia ’16 will begin training for Teach for America.

Barbaccia is making the trip between important milestones in his life: his college graduation and the start of his time with Teach for America. Barbaccia studied biomedical engineering; he said his coursework “challenged me to think in unfamiliar ways, and taught me resiliency and a hard work ethic.”

For six months, Barbaccia also took part in a supply chain and research and development co-op with Johnson & Johnson, where he worked on various projects, including with a research team on experimenting with some concept products. “I got to learn about their process of research and development from that early stage through supply chain to consumer,” he says. “It’s amazing how many people go into ensuring that a product is done the right way.”

During his time at Syracuse, Barbaccia was contacted by a recruiter from Teach For America, which recruits college graduates to spend two years working in high-needs community schools. As he learned more about TFA and the impact it has on students in low-income communities, he knew it was an opportunity for him. 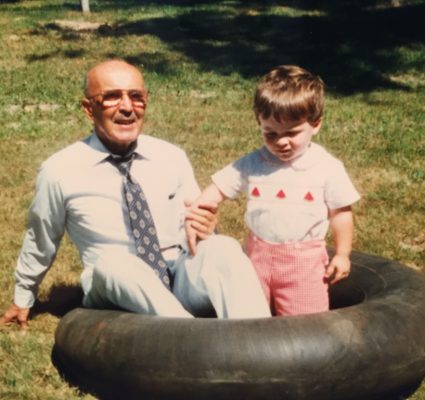 Matt Barbaccia ’16 as a youngster with his grandfather, Andrew.

Barbaccia begins his TFA training in June in Arizona and will teach secondary mathematics in Hawaii, starting in the fall. “I hope to make an impact that is meaningful to my students, and enriching for myself as well,” he says.

Until then, his eyes will be on the road in front of him—literally—and he is looking forward to the journey, just enjoying the ride, and meeting people along the way.

He hopes others will also benefit from his ride in meaningful ways.

“This is a great opportunity for me to show my uncle how much I care about him and the struggles he has had to face over a significant amount of his life,” Barbaccia says. “I hope my contribution, however large or small, makes a difference in the pursuit of a cure, for my uncle and all others who suffer from Parkinson’s disease.” 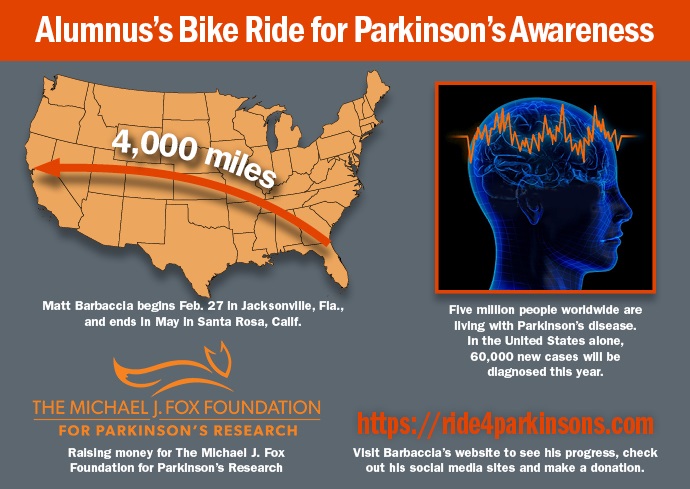