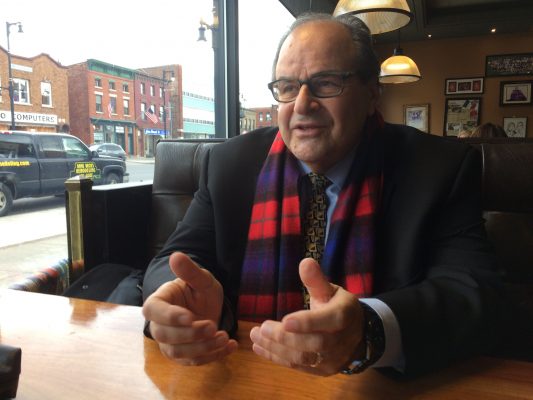 Frank Malfitano, founder of Syracuse Jazz Fest, speaks at Biscotti’s Cafe about the influence Syracuse University had on his life. Photo by Sean Kirst.

For more than three decades, Frank Malfitano ’72 has served as executive director and guiding force behind Jazz Fest, an event he founded in greater Syracuse. Admission is free for the annual festival, which has brought some of the greatest names in jazz, rhythm-and-blues and popular music to Central New York – including such legends as Dizzy Gillespie, Ray Charles, Aretha Franklin, Dave Brubeck and B.B. King – and put them on stage.

Wednesday, at 1 p.m. in the ornate lobby of the M & T Bank in downtown Syracuse, Malfitano will reveal the featured performers for the 35th Jazz Fest, to be held June 9-10 at Onondaga Community College. Malfitano, 71, said the announcement is always a jubilant moment: “To be in a position to present artists of that caliber? It’s dream-come-true stuff.”

Born in 1945, Malfitano was the only child of Frank and Mary Malfitano. His father was a machinist, while his mother worked as a clerk at several downtown department stores. As for Malfitano, he attended SUNY Fredonia and Onondaga Community College before enrolling in 1967 at Syracuse University.

He recently sat down at the Biscotti Café on North Salina Street to reflect on what the festival means to him–and to speak about the influence of his years at Syracuse, especially the performers he saw live at the legendary Jabberwocky nightclub.

The noticeable thing missing at Biscotti’s: an iPhone. Malfitano declines to use one. He said he finds something heartbreaking about going to a concert and seeing so many people staring at a device, rather than focusing on brilliant performers, up on stage. He fears a mobile device is often a barrier against experiencing the world, as it is.

The conversation, edited for space:

Looking back on it, how important was the University in your life?

If I look at what I’m doing now …. it gave me a world-class education in regards to the greatest blues, jazz and folk artists in the history of American culture. At Jabberwocky, those were the halcyon days, man …. Big-time. I saw everybody from Mississippi Fred McDowell and Buddy Guy and Junior Wells to Taj Mahal.

The place (Jabberwocky) was small, a low ceiling, dimly lit; it really wasn’t fancy but it had its own kind of ambience. I saw Weather Report there. I saw Chick Correa there. There were so many things that left an indelible impression on me. Gil Scott-Heron …. I went on to have a lifelong relationship with Gil. At Syracuse, we saw so many illustrious people. We saw the best films, the best lectures: Timothy Leary! I met Timothy Leary.

What I remember of my days at Syracuse was mostly on the cultural side. And certainly on the athletic side. I was a big sports fan. I was part of the Manley Zoo (the raucous basketball crowd at Manley Field House) around ’72,  but you’ve got to remember, I started in ’67. So I was at Syracuse for five years. I was hanging around Syracuse (in the mid-1960s) when Saul Alinsky was in town, because that’s where the action was ….  I had read “Rules for Radicals,” and he was very dynamic, very smart, and he was the textbook for community organizers, and certainly that had a tremendous impact on me.

You came in with the Baby Boom.

Those are amazing moments at Jazz Fest, and it’s why I encourage people to attend every year. People might say: “Oh, I go every year, I won’t go this year.” But you’ve got to go. The reality of what’s happening is that an entire generation of ’60s giants and pioneers is leaving us, and the thing that always gets to me is when I look up at our stage on a summer’s night, and I realize: Nowhere else on planet Earth is this happening on this night except in Syracuse, N.Y., my hometown.

Do you have a favorite Jazz Fest moment?

Falling in love with my wife (Kathy Rowe) at Jazz Fest. It was 1998, our first kiss. And there were transcendent moments spiritually, musically, culturally, but I think if I had to really pinpoint one, probably the 1989 festival at Long Branch (Park), because Dizzy Gillespie came. You get to work with Dizzy, and all of a sudden you’re in the jazz stratosphere.

Is there one compelling purpose, one theme, that you see as central to  Jazz Fest?

Look, the way we work, this is a free admission festival. And I’m more committed to it now than I’ve ever been, and I’ll tell you why: We’re rapidly morphing, transforming into a society that’s all about the haves and the have-nots, the super-rich and the very poor. The middle class is going, disappearing. But people still deserve a night out, they still deserve quality entertainment. Not everyone can pay for some enormous ticket. It’s absolute insanity, really insane, the way the cost of entertainment has skyrocketed to the point where it’s out of reach.

That’s tragic, because, basically, what are you saying? You’re saying based on economics, there’s a caste system, and you can’t see these artists. And in many cases, this art has come from the very community that can’t afford to see it. In that way, I’m a throwback, an anachronism, no doubt about it.

But the future of the festival isn’t certain. It’s not predictable. It’s only predictable if people continue to support it on an unconditional basis, and that gets harder and harder to do.

If the support is there? I’d stay there until I die.

How about the lasting impact? The way your time at the University played out in the way you see the world?

Think about it. I’m in the music business, and I’m a community organizer who’s using music to organize the community. All of that came from my time at Syracuse University. I mean, it’s who I am today. The seeds that were sown …. I’m not just a child of the ’60s. I’m still fulfilling the mission of the ’60s.

You know, it’s funny: I spent seven years in Detroit, which is the most segregated large city in the country. Knowing that, when I took over leadership of the Detroit International Jazz Festival, I wanted to create a festival that was inclusive and inviting. Every year, festival attendance was 50/50, racially 50/50.

And look, I don’t want to have a Meryl Streep moment here, but I think it’s important for everybody in the community to get to know their neighbors – black, white, Hispanic, gay, straight, old, young – it doesn’t matter. That’s the fabric of community. That’s who we are.

But too often, I think, we’re segregated. We’re segregated by race or by gender or by age or by this or by that. The great thing about JazzFest: You’re going to see everyone in the community, and now I’m seeing people, as adults, whose parents brought them when they were little kids.