Cherríe Moraga—a prominent figure in Chicana, feminist, queer and indigenous activism, art and scholarship—is participating in a two-week residency at the University.

Moraga is this year’s Jeannette K. Watson Distinguished Visiting Professor in the Humanities. In this capacity, she will headline a dozen lectures, performances and dialogues on campus from Monday, Feb. 20, to Friday, March 3. All events are free and open to the public. For more information, including a complete schedule, contact the Humanities Center in the College of Arts and Sciences at 315.443.7192, or visit humcenter.syr.edu.

Moraga’s visit is co-organized by Pedro Javier DiPietro, assistant professor of women’s and gender studies (WGS); Chandra Talpade Mohanty, Distinguished Professor and chair of WGS, as well as Dean’s Professor of the Humanities; and Myrna García-Calderón, associate professor of languages, literatures and linguistics (LLL) and director of the Latino and Latin American Studies Program. All three professors are in A&S. 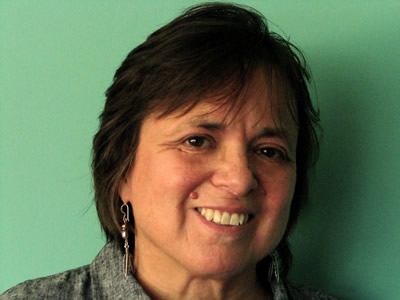 “Given the political shift in the United States since President Trump’s election, Moraga’s body of work, as well as her artistic and political interventions, is more relevant than ever,” says Mohanty, who also holds courtesy appointments in the Department of Sociology in the Maxwell School and in the Cultural Foundations of Education Program in the School of Education. “Her [work] contributes centrally to an inclusive humanities horizon for the 21st century. She gives voice and visibility to that which has been silenced and erased, opening up new domains of representation for marginal and minority subjectivities and identities.”

Moraga has enjoyed a distinguished career as a playwright, poet, essayist and activist. She is best known as co-editor of “This Bridge Called My Back: Writings by Radical Women of Color,” an award-winning anthology, now in its fourth edition, and as the author of “Heroes and Saints and Other Plays,” a collection of original theater. Moraga also co-founded La Red Xicana Indígena, a network of Chicana activists committed to indigenous political education, spiritual practice and grassroots organizing.

Moraga has been at Stanford University since 1996, serving as an artist-in-residence in the Department of Theater and Performance Studies and as a faculty member of the Center for Comparative Studies in Race and Ethnicity.

Her many honors and awards include the United States Artists Rockefeller Fellowship in Literature, the American Studies Association Lifetime Achievement Award and the Lambda Literary Pioneer Award.

The Watson residency marks her first time at Syracuse.

“As a woman of color, a feminist and a lesbian, Moraga builds upon a multilayered political consciousness,” says DiPietro, an expert in Latina and Chicana feminisms. “She uses this awareness to create literary worlds that are inspired by social groups, such as her own, who face intersecting marginalizations, in terms of race, gender, class, caste, sexuality, disability and nationality. The result is a body of work that is bold, fresh and original.”

Born and raised outside of Los Angeles, Moraga felt the effects of her mixed heritage—Mexican and Anglo—at an early age. That she was able to pass for white, while readily identifying with her indigenous background, compelled Moraga to learn more about her family, particularly her mother.

Thus began Moraga’s foray into writing and activism in the burgeoning field of women-of-color feminism. During the 1980s, she crafted numerous essays about the interconnected experiences and politics of gender, race, sexuality, class and capitalism. Such literary moxie all but secured her place as one of the first widely recognized Chicana lesbian writers and scholars.

“By foregrounding the experiences of Chicana lesbians as central to understanding and examining the intermingling of race, gender, sexuality, class and nation, Moraga’s dramatic and literary writings have radically altered the conceptualization of community, identity and social justice,” says García-Calderón, a scholar of Spanish American literatures and cultures. “Her work is a direct and challenging response to the problematic racist and xenophobic cultural shifts we’re witnessing in today’s national landscape.”

An Oakland native since 1998, Moraga is the author of eight books, six plays and dozens of anthologized works. Later this year, she will mount her latest play, “The Mathematics of Love,” and will unveil a “theatrical conversation” based on her forthcoming memoir, “A Geography of Desire.”

Mohanty characterizes Moraga’s writing, particularly her essays, as “layered innovations … in which the self is made visible.” Witness her use of multiple forms, media and metaphors of writing; juxtaposing journal entries; dream recollections; event chronologies; visual signs; and news clips.

Adds DiPietro: “[Moraga] contests literary authority, opening up space for the representation of the subjectivity of Chicana lesbians and Chicana lesbian mothers, delving deep into differences neglected by not only the heteronormative gaze of the American middle class, but also the heteronormative working-class canon of Chicano literature. Her incisive voice invites us to look at racialization and whiteness as relational, an interactive process that recruits heteronormativity through tropes of colonial rape, sexual violence and miscegenation.”

Moraga’s plays and essays embody this approach, and have advanced what DiPietro calls a “truly intersectional feminism,” in which the voices of women on the margins have become central to feminist thinking and practice.

The notion of “Place”—coincidentally, the theme of this year’s Syracuse Symposium—also is of unending interest to her.

“Cherríe Moraga studies the complex relationship between the private and the public, the domestic and the political, the intimate and structural,” says Vivian May, director of the Humanities Center and professor of WGS. “Many of her plays, for instance, are set in public spaces, and confront politically and economically charged issues, such as labor and immigration. Poverty and dispossession also resound throughout her work.”

DiPietro says Moraga speaks to the realities of displacement, exile and migration. “This is particularly true among those [people] battling for spatial survival against the background of colonial, imperial and capitalist dispossession,” he continues.

Organizers are confident that Moraga’s visit will spark conversation about a host of issues—from racism, heterosexism and human trafficking to border disputes, sovereignty movements, nationalism and spirituality.

“We invite the Syracuse community to engage with the multiple, urgent issues of power, politics and identity that Moraga raises in her work—learning and being inspired by her vision and her courageous, groundbreaking life work,” García-Calderón says. “She teaches from within the tradition of teatro, a radical tool for social change among Mexican-American and Mexican peasants.”

Monday, Feb. 20
Play Reading: “The Mathematics of Love”
A reading of Moraga’s forthcoming play by members of the Department of Drama in the College of Visual and Performing Arts.
7-9 p.m.
Syracuse Stage, 820 E. Genesee St., Syracuse

Moraga also is leading four playwright workshops, which are filled to capacity.