Memorial Service for Huston Smith to be Held on Sunday

The memorial will begin with a 49th day memorial service at 11 a.m. at the Zen Center of Syracuse Hoen-ji, 266 W. Seneca Turnpike, Syracuse. The service will be followed by a 12:30 p.m. luncheon sharing of memories in the Kilian Room, 500 Hall of Languages.

“Buddhists believe that when someone dies there is still a consciousness or an energy force that continues after the physical body disintegrates,” she explains. “That consciousness takes a new birth after 49-day period of transition. Although he was a Christian, he was very drawn to 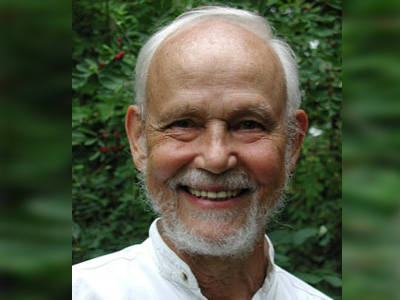 Buddhism and he would appreciate that he would be remembered in this ceremonial way.”

Smith was an early champion of religious pluralism and interfaith respect. He remains well known for his 1958 book “Religions of Man,” later revised, expanded and renamed “The World’s Religions.” The two versions have sold more than three million copies. It remains a popular introductory textbook and is often on the syllabus for Syracuse’s Religion 101 course, according to Philip Arnold, chair of the religion department.

Lunch will include videos of Huston Smith. That will be followed by anecdotes shared by Smith’s friends and colleagues, including Chayat, Arnold and others.

“Huston made profound contributions to the comparative study of religion, which have marked our department, Syracuse University and the wider community,” Arnold says. “This memorial event allows us all to express our respect and admiration for him and his legacy.”