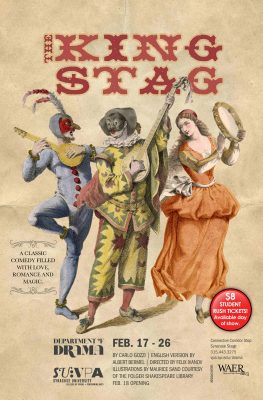 Magic and laughter come center stage as the Department of Drama presents the commedia dell’arte classic “The King Stag.” This prime example of the Italian comedic tradition of slapstick antics and sheer fun opens at the Storch Theatre in the Syracuse Stage/SU Drama Complex, 820 E. Genesee St., on Saturday, Feb. 18, and runs through Sunday, Feb. 26.

Written by Carlo Gozzi and translated into English by Albert Bermel, “The King Stag” embodies the commedia dell’arte, a theatrical form characterized by improvised dialogue and a cast of colorful characters. This style of theatre emerged in northern Italy in the 16th century and is based on a set of scenarios, meaning that it is centered on a basic plot, often a familiar story, upon which actors are at liberty to tailor their performances to the audience. In this production, the actors will be covered head to toe in lavish medieval period clothing worn in the traditional commedia dell’arte style that includes hand-made masks constructed by Olga Ivanov and costumes with vibrant fabrics.

“The King Stag” may have its fair share of laughs, but Department of Drama faculty member and “The King Stag” director Felix Ivanov believes the production must create an even deeper meaning. “This is a fairy tale for adults, not for kids. It must be serious and truthful,” Ivanov says. “If the characters don’t really love each other, if the danger and tragedy are not real, there is no story.”

“The King Stag” therefore has a lot in common with contemporary fantasy novels, film and TV shows. And what makes these stories come alive are the constant adversity the characters face. “The Lord of the Rings Trilogy” would be nothing without the barrage of enemies Frodo faces as he makes his quest to destroy the evil ring of power. Similarly, “The King Stag” must have this balance of fantasy and reality, a goal Ivanov believes can be achieved within the theatre space itself.

“Always, we will have this awareness that we are in a theatre and not some made-up place somewhere in China,” Ivanov says. Therefore, the set design will only incorporate what is absolutely necessary to the plot, and the magic elements of the play will be contained within the performance style.

Universal themes of undying love, friendship and courage make “The King Stag” an enticing show not to be missed.