Tonight, for Valentine’s Day: Love and Dreams at Holden Observatory 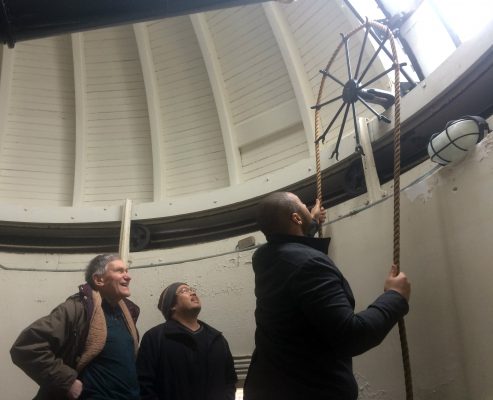 Professor Emeritus Marvin Druger and Thomas Vo watch as Jaysin Earl Lord tugs a rope that opens a gate in the roof of Holden Observatory.

Holden Observatory, the second-oldest building on the Syracuse University campus, will open its doors at 9:30 p.m. today for a Valentine’s Day tour. If you’re lucky, if the gray clouds of February roll away for a few hours, you might be able to look through a magnificent 19th-century telescope and catch a glimpse of the rings of Saturn.

The restored building, in itself, is a tale for Valentine’s Day. It represents a widower’s gesture of devotion to his wife, an example of all that can be done through love and faith.

They’ll be there tonight with Professor Emeritus Marvin Druger, who led the drive to restore the observatory. Marvin is a legendary professor of biology at Syracuse. His wife, Pat, a longtime administrator at the University, died in 2014 from lung cancer. She loved the stars. She was fascinated by the observatory, a quirky little landmark built in 1878.

For years, the building was used for storage or offices, without public access. Pat used to wish out loud that someone would fix a gear on the broken wooden dome atop the observatory, so students could again look toward the heavens after dusk.

In her memory, Marvin made it happen. After Pat’s death, he made a donation toward doing those repairs. Chancellor Kent Syverud gave his support to restoring the entire building. Duncan Brown, the Charles Brightman Professor of Physics in the College of Arts and Sciences, embraced the idea.

Brown has played a role in groundbreaking research about the universe. He was part of a staggering global revelation in 2015, when an international Laser Interferometer Gravitational-Wave Observatory (LIGO) group proved the existence of gravitational waves—thus confirming a prediction made by Albert Einstein in 1915.

Yet Brown also appreciates the meaning and heritage of the Holden Observatory, built in memory of Charles Demarest Holden in 1878 by his father, Erastus. The ground floor of the observatory is now called the Patricia Meyers Druger Astronomy Learning Center. First-year astronomy students gather there.

Visitors are greeted by a striking portrait of Pat, and Marvin says the building represents his greatest wish:

“Her name,” he says, “has been inscribed on this University.”

Marvin often tells this story about his wife. When they were young, in New York City, he met her a party. Afterward, out of courtesy, he decided to walk her home. He took her to the door of her apartment, then headed back to the elevator. He hadn’t asked for her phone number, or said that he might call her. If he’d gotten on the elevator, everything in his life might be different.

Instead, something told him to go back to the door. Pat was still looking for her keys. He asked if he could see her again.

She agreed. To Marvin, it was fate: They were married for 56 years.

Lord and Vo, with their shared passion for math and science, were glad to hear Marvin’s tales. They are two of the many students and researchers from around the world who participated in the gravitational waves discovery. They are also among the student caretakers assigned by the physics department to the Holden Observatory.

While they’d heard about the tale of Marvin and Pat–a tale they often shared with visitors who tour the building–they had never met Marvin face-to-face, until last week.

To no one’s surprise, they hit it off.

Marvin, as a biology professor, was famous for throwing answer keys out a classroom window to his students after final exams. He writes books that include his wry reflections on life. In an especially famous incident, he once rode a donkey across campus. At 82, he is a character, a beloved throwback, a keeper of Syracuse lore.

“The story is,” Marvin says, “that there was a line a mile long outside this building in 1939, when people lined up to get a glimpse of Mars.”

As for Vo and Lord, they are 21st-century students who revere a 19th-century telescope. Climb a spiral stairway to the top of the observatory, and they will show you how to tug a rope to open a gate that allows for viewing the night sky. They will pull a wooden lever, set against the wall, that causes the roof itself to move in circles. It provides room for the gleaming Alvan Clark telescope–the best technology available in the 1870s–to follow the path of a planet, or the moon.

There are fundamental relationships, Vo and Lord often explain, between the old observatory and the science behind gravitational waves. They speak of mathematics that provide the same core, the same foundation. Maybe the greatest link is the sheer wonder that brought Lord to a sidewalk in Flint, Mich., almost 20 years ago. He was a little boy, thrilled because his father gave him a new telescope.

Lord set it up. He took a look. He saw a burning white ball.

“I thought it was the moon,” he says.

Instead, it was a city streetlight.

“From there on out,” Lord says, “I never stopped looking up.”

As a teenager, he lost too many friends to violence, to despair on city streets. Lord found a way to make it out. He says the greatest single factor was the devotion of his father, Earl Greene, an electrical engineer “who put me in front of books, right away.”

Lord graduated from high school. He took a job in a General Motors plant. It was good work. He could have stayed there for the rest of his life.

“I knew there was something more I wanted to do,” he says.

He decided to go to college at Syracuse University, where the awestruck child raised in Flint is now a young man involved in a great astronomical discovery, where he is preparing to seek work in quantitative analysis on Wall Street.

Someday, he hopes to again play a role in his hometown, to offer the kind of bridge to city children that his father gave to him.

Lord describes the entire saga as “a dream,” a confluence of years of hard work and good luck. It is the same formula embraced by Thomas Vo, a doctoral student whose specialty is astrophysics. Vo was also part of the gravitational waves breakthrough; he spent two years at Hanford Observatory in Washington, where the discovery would actually occur, before he joined the physics program at Syracuse.

When he allows himself to contemplate what it means, the idea overwhelms him: The LIGO team was hunting down proof of black holes more than a billion light years away. Vo says he found his way to such a quest because his parents believed in him, because they “wanted me to chase the dream.”

Vo grew up in Seattle. As a teenager, he spent much of his time helping his mother and father run a restaurant. They were refugees. His father was a South Vietnamese soldier who fought alongside American troops. After South Vietnam fell, his parents fled and eventually made their way to America, where they set one central example for their children:

You put others first and you work, relentlessly.

He honored that wish. He took a childhood passion for “Star Wars” and other movies about space and transformed that passion into a pursuit of wonder. He attended the University of Washington, became involved in LIGO, then came to Syracuse to finish his doctoral studies. He describes himself as one tiny part of the operation at Hanford, involved with “the advance hardware” that eventually helped in detecting the gravitational waves.

As for his goal in life, he frames it in this way:

“I just want to be out there, solving cool problems.”

In other words, Vo shares his dream with Jaysin Lord and Marvin Druger, a dream they’ll live out tonight at the Holden Observatory:

Every day, in all conditions, they keep looking toward the stars.