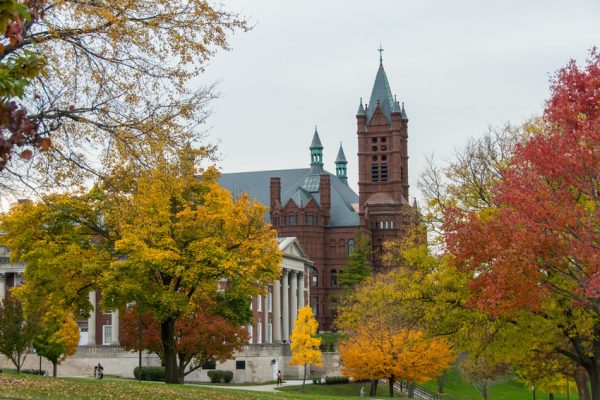 Members of the Syracuse University Graduate Student Organization (SU GSO) vigorously advocate on matters of critical importance for their peers on a national level through their work in the National Association of Graduate-Professional Students (NAGPS).

Their important work—and advocacy skills—paid off recently as the SU GSO won its bid to host the 2017 NAGPS national conference. The conference will be held on campus in November.

Peta Long G’17, SU GSO’s vice president of external affairs and a Ph.D. student in the Newhouse School, presented the bid at Stony Brook University in November. NAGPS is a student-run, nonprofit organization dedicated to improving the quality of life of graduate and professional students across the United States.

The SU GSO has been a legacy member of NAGPS for the last eight years. Members of the student advocacy group have consistently advocated for lowering graduate student loan debt rates; higher education funding for STEM, the humanities and the arts; OPT extension; and state-side visa (F and J type) revalidation, Long says.

Over the last three years, SU GSO, along with several Northeast regional schools, has pushed for an advocacy platform that parallels its legislative efforts. At the 2015 national conference, these efforts were solidified when a resolution was passed to support an elected advocacy team.

The next step for the organization is educating others about the work.

“By bringing the national conference to SU, we will be able to utilize our network and history of advocacy to engage that conversation about advocacy alongside legislation,” Long says. “We want to influence the nationwide discussion on graduate student employment and rights, and various social justice issues, such as sexual assault advocacy, diversity and inclusion, and the changing landscape of the graduate student population.”

“Hosting this conference at Syracuse University puts the University on the national map in terms of strong student leadership,” says SU GSO President Rajesh Kumar, a Ph.D. candidate in the College of Engineering and Computer Science. “It gives us the opportunity to share the best practices, programs and achievements of the GSO, and learn the same from student leaders of more than 80 universities.”

The SU GSO members also worked with members of the Syracuse University Student Bar Association and SUNY College of Environmental Science and Forestry students to make their bid. The bid was also supported by Chancellor Kent Syverud, Vice Chancellor and Provost Michele Wheatly, the Graduate School and the Division of Enrollment and the Student Experience.

Along with the successful bid by the SU GSO to host the next conference, College of Arts and Sciences graduate student and SU GSO member Samuel Leitermann, who has been a social justice advocate for NAGPS, was elected president of the national organization. College of Law student Derrick Taylor, a University senator of the GSO and a member of the University Senate, was named the social justice advocate for 2017.

The conference includes the business of the NAGPS to strategize on national and regional levels; elections to the executive board; and sessions that highlight different graduate student organizations to share their best practices and problem-solving techniques. A call for abstracts will go out this spring.

“We plan to reach out to a wide range of schools and introduce them to NAGPS,” Long says. “We will have the added bounce of how to bridge the research divide of what we do as graduates in our discipline with the advocacy work and several keynote sessions to educate and motivate.”

Organizers encourage students and members of the University community to attend sessions and maybe rethink what it means to be a graduate student.