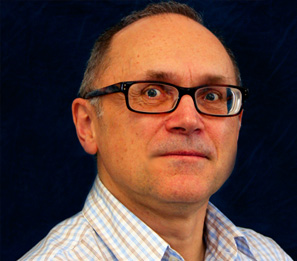 Buckingham, an Emeritus Professor at Loughborough University in the United Kingdom, has published 30 books and 250 articles about media, young people and education. He will address the need for critical thinking about media and technology and consider whether media literacy is a sufficient response to the challenges of a “post-truth” era.

“David walks the line between illuminating critical perspective and healthy skepticism in the reading of media messages and inspiring the cultural power of human storytelling through media,” says Michael Schoonmaker, an associate professor and chair of the Department of Television, Radio and Film in the S.I. Newhouse School of Pubic Communications.

“In what he frames as ‘the post-truth’ era, Buckingham demonstrates the ever-rising importance of educating a media-literate citizenry to bring clarity, reason, and humanity to an often-misleading media environment of alternative facts and demagoguery,” Schoonmaker adds.

In 2014 Buckingham developed a teaching pack called Developing Media Literacy, published by the English and Media Centre. The pack, resulting from a four-year research project, contains an extensive set of multimedia teaching materials for use in primary schools.

Asking, “What do media learners learn to do?” Buckingham wrote, “Our focus here is on what learners need to be able to do with media—and in particular how they make meaning from and with media,” using more than just technical skills. “We’re also talking about the ability to analyze, to communicate, to express meaning, and to reflect on these things.”

He breaks this down into three components: reading, writing and context. “Reading is about interpretation, understanding, response, and critical analysis; writing is about expression, communication, and creative production. Both involve imagination, reflection, and the making of meaning,” he wrote.

“It’s important to emphasize that media education is not about reading and writing in isolation: we also need to understand the contexts in which these things take place,” he continued. “As we come to understand reading and writing in context, we look at how a given text relates to other texts, and how texts are produced, circulated and read or used by different audiences.”

(See a summary of Developing Media Literary at ddbuckingham.files.wordpress.com/2015/04/media-literacy-concepts-processes-practices.pdf)

“There are few scholars who have had an impact in the field of media education than David Buckingham: author, co-author, or editor of 30 uncharacteristically approachable books along with hundreds of articles on the subject of young people, media and education,” Schoonmaker says. “Fewer still are able to bring the sleeves-up perspective to the rich and complex juxtaposition of the fields of media and education that David does as a media maker, novelist, musician, and teacher.”

The School of Education and the Newhouse School offer a joint master’s program in Media and Education, the only such program of its kind in the United States. “There could not be better time for these once-opposed fields of study to lock arms in facing challenges of the world today,” Schoonmaker says.

Since 2005 The Douglas Biklen Landscape of Urban Education Series has presented current ideas and strategies for navigating the U.S. urban education terrain. A gift from SOE Board of Visitors member Jeryl Mitchell ’81, G’83 named the series in honor of former Dean Biklen.

Buckingham’s program, “Reinventing Literacy: Critical Thinking for the Age of Digital Media,” begins with a reception at 5:30 p.m. and his speech at 6:15 p.m. at 91 Horatio Street in New York City. For more information or to R.S.V.P., contact Jennifer Russo at jhrusso@syr.edu.