Tickets for the March 6 presentation by Humans of New York (HONY) creator Brandon Stanton go on sale at 9 a.m. on Wednesday, Feb. 8, and are $5 for SU and SUNY-ESF students with I.D. at the Schine Box Office and $10 for faculty, staff and the public at boxoffice.syr.edu.

Stanton—named one of Time Magazine’s 30 Under 30 People Changing the World—is speaking for the University Lectures series; his appearance is co-presented by University Union. The event is Monday, March 6, at 7:30 p.m. in the Schine Student Center’s Goldstein Auditorium. Doors open at 6:45 p.m.

Stanton started the photography blog Humans of New York in late 2010 with the goal of photographing 10,000 New Yo 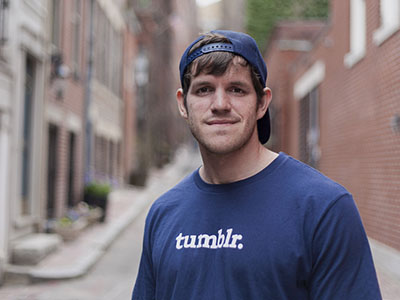 rkers and creating “an exhaustive catalogue of the city’s inhabitants.” “Somewhere along the way, I began to interview my subjects in addition to photographing them,” Stanton says. “And alongside their portraits, I’d include quotes and short stories from their lives.” The response was remarkable.

The Humans of New York Facebook page now has more than 18 million fans, the companion Instagram account 6.5 million followers and the Twitter account 580,000 followers. In addition to providing a worldwide audience with daily glimpses into the lives of strangers on the streets of New York City, HONY has expanded over the past five years to feature stories from more than 20 different countries.

Stanton grew up in Marietta, Georgia, a suburb of Atlanta, and majored in history at the University of Georgia. After graduation, he traded bonds in Chicago. In 2010, he bought a camera and started shooting photos in downtown Chicago on weekends. When Stanton lost his job a short time later, he moved to New York City and decided to pursue photography full time, which led to the creation of HONY.

Stanton traveled to the Middle East in August 2014 to photograph people as a part of a 50-day trip through 10 countries under the auspices of the United Nations. The following summer, he traveled to Pakistan and Iran. At the conclusion of the Pakistan visit, Stanton crowd funded $2.3 million to help end bonded labor in the country. It was the first of several successful online funding efforts for HONY.

In January 2015, Stanton posted a photo of Vidal Chastanet, a teenager at Mott Hall Bridges Academy, located in a crime-plagued neighborhood in Brooklyn. Chastanet said his life had been most influenced by the principal at his school. Stanton spent the next two weeks profiling the school and the principal, Nadia Lopez.

At the same time, Stanton urged his followers to contribute to a crowdfunding campaign to send the school’s students on a visit to Harvard University to expand their ideas of their potential. The goal was $100,000. The total raised was $1.4 million. The effort caught the attention of the White House, and Stanton, Chastanet and Lopez were invited to meet President Obama in the Oval Office.

More recently, Stanton began posting stories and photos from the pediatrics department of Memorial Sloan Kettering Cancer Center in New York City. And, as before, he launched a crowdsourcing campaign to raise funds for pediatric cancer research. The target was $1 million. To date, more than 104,000 people have donated $3.875 million.

Stanton is the second of three spring speakers for the University Lectures. The series concludes on April 5 with Pulitzer Prize-winning author Sonia Nazario.