Wayne Franits, professor of art history in the College of Arts and Sciences, has been named a Distinguished Professor by Vice Chancellor and Provost Michele Wheatly. The distinction is one of the University’s highest honors for faculty members, bestowed upon those who have attained extraordinary scholarly achievement and exhibited a record of outstanding intellectual leadership in their discipline. 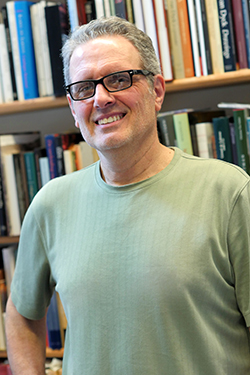 “Wayne has made tremendous contributions to the field of art history, to the College of Arts and Sciences and to the entire University,” says Wheatly. “His scholarship in 17th-century Dutch and Flemish art has earned him international distinction among his peers, and his prolific writings and presentations will have a lasting impact on the field. An outstanding teacher, scholar, leader and role model, he is deeply deserving of this distinction.”

A nominating letter praised Franits’ work as “copious” and “well regarded,” and noted “he has achieved unmatched international renown.” The letter applauded his extensive publications and service contribution to his field, including at the University and on the board of directors for the Historians of Netherlandish Art.

In addition to having written numerous articles, book chapters, essays in exhibition catalogues and book reviews, Franits has been particularly active as an author and editor of books. His first three books (1993, 1997 and 2001) were all published with Cambridge University Press. Thereafter, he wrote a widely acclaimed survey on genre painting published by Yale University Press in 2004, which appeared in a paperback edition in 2008. Additionally, Franits has published monographic studies on, among others, the 17th-century Dutch painters, Pieter de Hooch (2006), Hendrick ter Brugghen (2007; co-authored with Leonard J. Slatkes), Dirck van Baburen (2013) and Johannes Vermeer (2015). He also edited two well-received studies focusing on the state of scholarship with respect to 17th-century Dutch art (1997; 2016). Franits’ research for these projects has repeatedly been supported by the National Endowment for the Humanities and the American Philosophical Society.

Franits is frequently invited to speak on his specialty. In fact, just this past year (2016) he delivered lectures at three European venues: a keynote address on the occasion of the publication of a catalog of Dutch genre paintings at the Mauritshuis in The Hague, The Netherlands (December 2016); a lecture at “Beyond Caravaggio,” a two-day international conference at London’s National Gallery (November 2016); and a lecture on Godefridus Schalcken’s three self-portraits at an international conference in Cologne, Germany (January 2016).

Franits is currently completing a book on the London period of the late 17th-century Dutch painter Schalcken (1643-1706). In 2015, he wrote an essay on Schalcken’s time in England and 10 entries for the catalog for the exhibition “Schalcken; Painted Seduction,” held at the Wallraf-Richartz-Museum in Cologne, Germany, and the Dordrechts Museum in Dordrecht, The Netherlands.