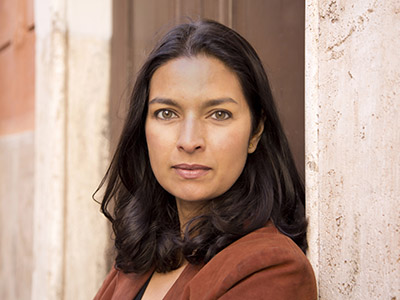 Pulitzer Prize-winning author Jhumpa Lahiri will speak for the University Lectures on Tuesday, Feb. 7, at 7:30 p.m. in Hendricks Chapel. Lahiri’s appearance is co-sponsored by the College of Arts and Sciences and the Humanities Center. The event is free and open to the public. American Sign Language (ASL) interpretation and Communication Access Realtime Translation (CART) will be available.

Lahiri is a professor of creative writing in the Lewis Center for the Art’s Program in Creative Writing at Princeton University. She received the Pulitzer Prize in 2000 for “Interpreter of Maladies” (Houghton Mifflin, 1999), her debut story collection that explores issues of love and identity among immigrants and cultural transplants.

Her novel “The Namesake” (Houghton Mifflin) was published in 2003 to great acclaim. It expands on the perplexities of the immigrant experience and the search for identity. The narrative follows the Gangulis, an Indian couple united in an arranged marriage, as they build their lives together in America. Unlike her husband, Mrs. Ganguli defies assimilation, while their son, Gogol, burdened with the seemingly absurd name of the long-dead Russian writer, awkwardly struggles to define himself. A film version of “The Namesake” (directed by Mira Nair) was released in 2007.

Lahiri’s book of short stories “Unaccustomed Earth” (Alfred A. Knopf, 2008) received the 2008 Frank O’Connor International Short Story Award (the world’s largest prize for a short story collection) and was a finalist for the Story Prize. Her book “The Lowland” (Alfred A. Knopf/Random House, 2013) won the DSC award for South Asian fiction and was a finalist for both the Man Booker Prize and the National Book Award in fiction.

Her latest book, “In Other Words” (Knopf, 2016), which becomes available on Feb. 9, explores the often emotionally fraught links between identity and language.

With a compelling, universal fluency, Lahiri portrays the practical and emotional adversities of her diverse characters in elegant and direct prose. Whether describing hardships of a lonely Indian wife adapting to life in the United States or illuminating the secret pain of a young couple as they discuss their betrayals during a series of electrical blackouts, Lahiri’s bittersweet stories avoid sentimentality without abandoning compassion.

Born in London, Lahiri moved to Rhode Island as a young child with her Bengali parents. Although they have lived in the United States for more than 30 years, Lahiri observes that her parents retain “a sense of emotional exile,” and Lahiri herself grew up with “conflicting expectations … to be Indian by Indians and American by Americans.” Lahiri’s abilities to convey the oldest cultural conflicts in the most immediate fashion and to achieve the voices of many different characters are among the unique qualities that have captured the attention of a wide audience.

Alongside the Pulitzer Prize, Lahiri has won the PEN/Hemingway Award, an O. Henry Prize (for the short story “Interpreter of Maladies”), the Addison Metcalf Award from the American Academy of Arts and Letters, the Vallombrosa Von Rezzori Prize and the Asian American Literary Award. She was also granted a Guggenheim Fellowship in 2002 and a National Endowment for the Arts Fellowship in 2006.

Joining Lahiri in speaking this semester for the University Lectures are Humans of New York founder Brandon Stanton on Monday, March 6, and Pulitzer Prize-winning author Sonia Nazario on Wednesday, April 5.

The University Lectures was created through, and is supported by, the generosity of alumnus Robert B. Menschel ’51.