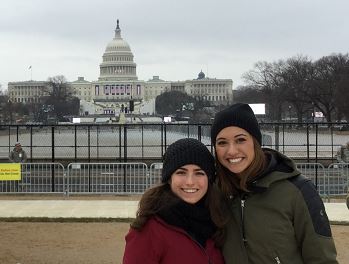 Meghan Mistry ’17 and Kate Capodanno ’17 during NCC News coverage of the inauguration.

Real-world experience is vital for aspiring broadcast journalists. Two future broadcasters, Meghan Mistry ’17 from the Newhouse School and Kate Capodanno ’17 from the College of Arts and Sciences, recently experienced major political events worthy of placement on their pitch reels used to land a job.

“I was able to cover the first presidential debate and the election in New York City for NCC News/Elections Unpeeled via the Newhouse partnership with Skype in Media,” says Mistry, a recent Hearst Foundation Journalism award winner who loved covering what she calls “an interesting political campaign that (she) wanted to see all the way through.” Adds Mistry, “I had decided even before election results came out that no matter who won I was going to go to D.C. to cover the Inauguration, so I asked Kate if she’d want to make the trip with me.”

“Luckily, we were staying with a Newhouse alum who lives in D.C., so we were right in the heart of the activity,” says Capodanno. “We waited more than an hour at the security checkpoints, which was to be expected, but that was about the only real challenge.”

Since they were there for the Inauguration, they stayed for the big event the following day: the Women’s March on Washington. Public transportation was packed that day, according to Capodanno, but both she and Mistry were able to get to the story and bring it back home for NCC News. The experience of both events was one that Mistry won’t soon forget.

“Being there to cover it was really surreal,” she says. “I knew the entire time that the eyes of the world were upon the U.S. capital, so I tried to soak everything in. I know to cover a presidential inauguration at 21 is something most journalists never get the chance to do, and I’m really grateful Kate and I made the opportunity for ourselves and the broadcast faculty got behind us to give us gear and guidance to get there.”

“I think this was a great experience,” says Capodanno, who adds that the reason she and Mistry went there was to get stand-ups for the resume reel. “I’m happy with what I was able to accomplish there, especially in trying to find a local Syracuse angle to report back to our audience.” Capodanno says it was slightly challenging finding Central New Yorkers to speak with. She looked for people wearing sporting gear from upstate New York teams to help identify people from close to home. “My dad was proud that I was looking out for a Buffalo Bills logo.”

Here are some examples of their work in Washington: