Tim Brower Brought Creativity to Work at School of Architecture

Tim Brower’s creativity and passion was probably most evident in the Fayetteville home he shared with his wife of 18 years, Holly Greenberg, a printmaker and associate professor in the School of Art in the College of Visual and Performing Arts, and their two young sons, Gulliver and Eisen. 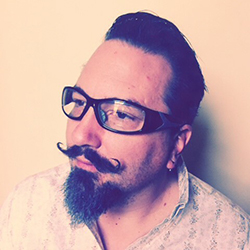 Their house was a decommissioned church. Over the past several years, Brower drew on his skills as an architect and master fabricator to carefully and lovingly transform it into a home for his family and a studio for his wife and himself. For their sons, he created a small shingled cottage inside the church. As they grew older, Brower transformed the church’s choir loft into a bedroom accessed through a secret door disguised as a bookcase.

Brower—an architect, artist and sculptor—died on Jan. 13. He is survived by his wife and sons; his parents, Dave and LouAnn; his siblings, Ann and David; several sisters-in-law, nieces and nephews, and many colleagues and friends.

“Over the last three years, Tim led a very successful effort to transform the material reality and culture of all our design and fabrication efforts,” says Michael Speaks, dean of the School of Architecture. “Working closely with colleagues and students, Tim helped to remake our facilities but, more importantly, he introduced a level of design expertise that was absent before his arrival. Tim was a great educator, mentor and leader in our school.”

John Bryant, woodshop/fabrication technician in the School of Architecture, worked side-by-side with Brower for the past few years. “Tim had a degree in architecture, which gave him valuable insights into what professors looked for, especially in the digital realm,” he says.

Students would often bring their digital design files in for Brower to review and provide feedback, and he was an important mentor to them, says Bryant. Brower helped students to put their knowledge into practice and to transform ideas into tangible components. “He made students more confident in their abilities to transfer their virtual ideas into 3-D objects,” he says.

Brower’s expertise was not just limited to the digital realm—he was as much at home in the analog shop with drills and saws, says Bryant. He was always calm and unflappable—especially needed in an environment with deadlines and constantly changing dynamics.

Bryant says he and Brower shared a great working relationship. Both having broad tastes in music, they developed a playlist to accompany their work in their shop. “We would go from Mozart, to Black Sabbath, to Evita to Mr. Rogers Neighborhood,” Bryant says. “His willingness to explore the variety, and the resulting times we burst out laughing at the contrasts, will stay with me forever.

Brower attended Hope College, North Carolina State University and Guilford College, earning a bachelor’s degree in art and philosophy. He earned a master of fine arts degree in sculpture from the School of the Art Institute of Chicago and a master of architecture degree from Syracuse in 2009.

He was an avid runner, cyclist and swimmer, and had completed a full Ironman triathalon.

A memorial service will be held on Sunday, Feb. 5, at 2 p.m. at the United Church of Fayetteville, 310 E. Genesee St. in Fayetteville.