The Newhouse School of Public Communications will be one of four schools nationwide to host an innovative new program to train journalists in the use of drones, or unmanned aerial systems, for news coverage. 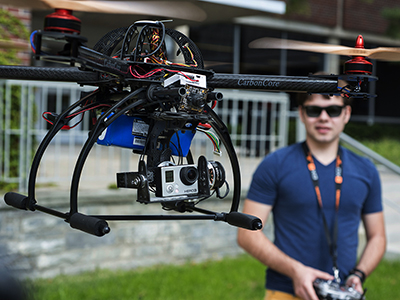 Hands-on workshops at participating universities will provide training on safe drone operations as well as information for those studying to take the exam for the Federal Aviation Administration’s new Part 107 Drone Pilot’s Certificate. In addition, the three-day workshops will focus on the legal and ethical issues of drone journalism, community best practices and coordinated operations in a breaking news environment, and will explore ways drone photography can be used in innovative storytelling.

The Newhouse session will be held April 21-23 on campus. “Our students and faculty have been experimenting with drone technology for several years, delving into the incredible potential it has for journalism and other communications fields,” says Newhouse Dean Lorraine Branham. “We are glad to have this opportunity to help professional journalists expand their news coverage abilities through this hands-on drone training.”

Syracuse students have been working with drones in classes taught by Dan Pacheco, Peter A. Horvitz Endowed Chair in Journalism Innovation, and through the Skyworks Project, a student group incubated in Newhouse’s Alan Gerry Center for Media Innovation that focuses on drone technology.

“Every journalist now has the opportunity to cover events with flying cameras that provide a bird’s-eye view, which is extraordinary,” says Pacheco. “But it doesn’t stop there. When we combine drones with 360 video cameras and virtual reality viewers like we’re doing at Newhouse, we can give viewers the sensation that they’re actually in the drones as events unfold below them.” Pacheco and his students will show journalists participating in the workshop how to get started in 360 drone videography.

Registration for the Syracuse University workshop is available online.

“We’re dedicated to supporting journalists’ experimentation with new technology,” says Erica Anderson of Google News Lab. “Drones present an opportunity for journalists to tell stories in visually rich and immersive ways, but there are still many open questions on how to apply them safely, ethically and creatively for news reporting. We couldn’t be more pleased to partner with the Poynter Institute on the drone journalism program to help tackle these challenges.”

NPPA’s legal counsel, Mickey H. Osterreicher, will participate in the workshops. Osterreicher has spoken on behalf journalists as the federal government drafted regulations for where and when drone journalists could fly.

The program also will feature hands-on introductory flight training sponsored by DJI, the global leader in drone technology and 2016 winner of NPPA’s Lemen award for technology innovation in photojournalism.

Registration for each workshop will be capped at 60 people. For more information, see http://about.poynter.org/training/in-person/drones-17.