Devoted baseball fans, O’Brien and his father, Robert, spent many afternoons watching the Red Sox at iconic Fenway Park. When they weren’t at the ballpark, father and son bonded over radio broadcasts of Red Sox games. 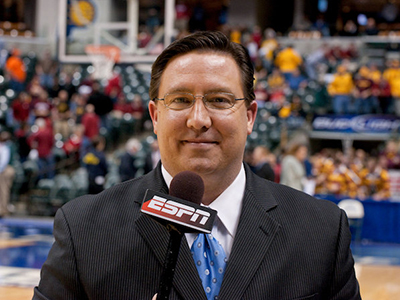 While O’Brien would play baseball for a state championship team at Marlborough High School, from an early age he knew his future in sports revolved not around a bat or a glove, but a microphone. Instead of belting out game-winning home runs or making a leaping catch in front of the Green Monster outfield wall, O’Brien dreamed of broadcasting Red Sox games to generations of passionate fans.

Through hard work, dedication to his craft and the specialized training he received from his instructors at the Newhouse School, O’Brien is living his dream as the storyteller who paints a picture of America’s pastime to baseball fans across the country.

“I’ve been so terribly lucky to be a sports broadcaster my whole life. This is all a dream come true for me,” said O’Brien, who recently addressed a group of 30 alumni at a Syracuse University Alumni Club of Boston event.

“Not everyone can say the dream they had as an eight-year-old  is how they live their life. At every home game, I get to walk into 4 Yawkey Way [Fenway Park’s address] to bring Red Sox baseball into the homes of these passionate and knowledgeable fans. I know how lucky and fortunate I’ve been in my broadcasting career.”

O’Brien, who graduated with a degree in broadcast journalism, is preparing to enter his 11th season calling Red Sox games. His first nine seasons covering the team were spent on WEEI radio before earning his dream job, serving as the lead play-by-play broadcaster for NESN.

During his broadcasting career, O’Brien has called eight no-hitters and nine World Series, and narrated Barry Bonds’ record-breaking 756th home run. He’s also called college basketball games on ESPN since 2002, including the women’s Final Four since 2010, and broadcasts at least one SU basketball game inside the Carrier Dome each year.

O’Brien credits his successes to his strong work ethic, his passion, a little luck and the lessons learned at SU.

“After 30 years in this industry, my fondest memories are of my days broadcasting Syracuse University athletics because that’s where it all began for me,” said O’Brien, who broadcasts an average of 225 games a year between the Red Sox and his college basketball and baseball duties for ESPN.

“I was obsessed with doing play-by-play, and SU is the cradle of sportscasters. For an ambitious student broadcaster, there isn’t a better school in America if you want to be on air. Newhouse taught me you have to be a good reporter if you’re going to be a good play-by-play announcer, and when I graduated, with the skills I learned, I could just as easily have been working as a correspondent for a network like CNN or a local television affiliate.”

During his basketball and baseball playing days, O’Brien would perform play-by-play duties of his own games, an act that “drove everybody else crazy” but only cemented his passion for announcing.

After working for WKNE radio in Keene, New Hampshire, where he served as a board operator and ensured the Red Sox games made it on the airwaves, O’Brien headed to Syracuse University in the fall of 1982 hoping to hone his broadcasting skills. He joined WAER, SU’s award-winning radio station, and soon learned about the competitiveness of the sports broadcasting field. Instead of shying away, though, O’Brien thrived, and found himself calling SU men’s basketball games inside the Carrier Dome.

“As a 19-year-old, it was an almost out-of-body experience, but I had a profound feeling that I was doing exactly what I was meant to do. Those Carrier Dome crowds had a lot to do with my love of broadcasting. You’re almost dancing with the crowd, your voice and their emotions. All the great ones at Syracuse focused on that sensation of using the crowd effectively to tell a story. It was the best possible education for a play-by-play announcer.”

Almost as soon as he graduated, O’Brien landed his first job in radio in Spartansburg, South Carolina. By 1990, he was broadcasting Atlanta Braves games for WSB, and in 1991, O’Brien reached the pinnacle of baseball broadcasting when he called his first World Series, a seven-game loss by the Braves to the Minnesota Twins.

Following a nine-year stint as the broadcaster for the Florida (now Miami) Marlins, including calling the Marlins’ World Series championship in 1997, O’Brien and his wife, Debbie, were searching for homes in Rye, New Hampshire, when he heard the news that would bring his broadcasting career full circle.

The Red Sox had an opening on their radio broadcast team, and O’Brien, who longed to return home to Massachusetts, soon arranged an interview that would lead to his dream job.

When it comes to his favorite call on the microphone, O’Brien doesn’t hesitate: David Ortiz’s series-defining grand slam in game two of the 2013 American League Championship Series, a monumental home run that propelled the Red Sox to a World Series title.

O’Brien, who enjoys spreading his love of play-by-play to aspiring broadcasters, has one piece of advice that took him years to learn: silence can be golden.

“I’ve really come to admire the ability to use silence, my own silence, to better tell the story and heighten the drama of the game,” O’Brien said.  “Sometimes the best thing you can do as a broadcaster is to say absolutely nothing. I learned over time there’s nothing I can say that is superior to the sound and the thrill of the crowd.”

The Newhouse School ranked as the second most awarded school internationally in the Communication Arts Advertising Annual 62, winning two out of the 10 student awards given and five Shortlists. “The students at Newhouse continue to impress,” said alumnus Dan Lucey…

Tula Goenka, professor of television, radio and film (TRF) and director of the TRF graduate program, has been named the inaugural Dean’s Leadership Fellow at the Newhouse School. In this role, Goenka will focus on the engagement, inclusivity and support of the…

Ashley Smith-Purviance’s G’14 interest in researching education systems and policies—and especially their impact on youth of color and Black girls—stems from her study abroad experience while completing an M.S. in higher education at the Syracuse University School of Education. “My…

In a panel discussion last week, faculty experts from the Maxwell School of Citizenship and Public Affairs shared expertise and insight on the recent Supreme Court ruling in Dobbs v. Jackson, which overturns the precedent set by Roe v. Wade…