The spring-semester lineup for the 2016-17 Raymond Carver Reading Series begins with author Eleanor Henderson on Wednesday, Feb. 1. All events in the series take place in Huntington Beard Crouse Hall’s Gifford Auditorium, with a Q&A at 3:45 p.m. and an author reading at 5:30 p.m.

The series is presented by the M.F.A. program in creative writing in the Department of English in the College of Arts and Sciences. The events are free and open to the public. Parking is available in SU pay lots. 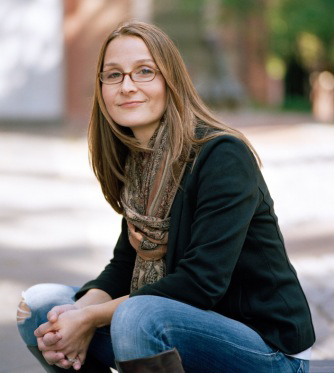 Henderson is a visiting writer teaching in the M.F.A. program in creative writing this semester. An associate professor at Ithaca College, she is co-editor of “Labor Day: True Birth Stories by Today’s Best Women Writers” (FSG, 2014). Her debut novel, “Ten Thousand Saints” (HarperCollins, 2011), was named one of the 10 Best Books of 2011 and was a finalist for The Los Angeles Times’ Art Seidenbaum Award for First Fiction.

Her short stories have appeared in Agni, The Best American Short Stories, Columbia, Ninth Letter, North American Review and Salon. Her nonfiction work has appeared on “All Things Considered” and in The New York Times, Poets & Writers, the Virginia Quarterly Review and the Wall Street Journal.

She attended Middlebury College and the University of Virginia, where she received her M.F.A. in 2005.

Henderson’s second novel, “The Twelve-Mile Straight,” will be published by HarperCollins in September 2017.

Other writers appearing this spring:

Chee is the Spring 2017 Don McNaughton Reader in the College of Arts and Sciences. Author of the novels “Edinburgh” (Picador, 2002) and “The Queen of the Night” (Houghton Mifflin Harcourt, 2016), he is a contributing editor at The New Republic and an editor at large at VQR.

His essays and stories have appeared on NPR and in Guernica, The New York Times Book Review, Out, Slate and Tin House.

He is the recipient of a 2003 Whiting Award, a 2004 NEA Fellowship in prose and a 2010 MCCA Fellowship, and residency fellowships from Amtrak, Civitella Ranieri, the MacDowell Colony and the VCCA.

Gay is the author of three books: “Against Which” (Cavankerry Press, 2006); “Bringing the Shovel Down” (University of Pittsburgh Press, 2011); and “Catalog of Unabashed Gratitude” (University of Pittsburgh Press, 2015)—winner of the 2015 National Book Critics Circle Award and the 2016 Kingsley Tufts Poetry Award. “Catalog” was also a finalist for the 2015 National Book Award in Poetry, the Ohioana Book Award, the Balcones Poetry Prize and the Hurston-Wright Legacy Award, and was nominated for an NAACP Image Award.

Gay is the co-author of the chapbooks “Lace and Pyrite: Letters from Two Gardens” and “River”; an editor with the chapbook presses Q Avenue and Ledge Mule Press; and a founding editor of the online sports magazine Some Call it Ballin’.

He is also a founding board member of the Bloomington Community Orchard, a “nonprofit, free-fruit-for-all food justice and joy project.”

Gay has received fellowships from Cave Canem, the Bread Loaf Writers’ Conference and the Guggenheim Foundation.

He teaches at Indiana University.

His linked collection of short stories, “The Affliction,” is forthcoming from Four Way Books in early 2018.

Young is a recipient of fellowships from the Bread Loaf Writers’ Conference, the National Endowment for the Arts, the John Simon Guggenheim Memorial Foundation and the Rockefeller Foundation.

Kasischke is the Spring 2017 Richard Elman Visiting Writer in the College of Arts and Sciences.

She has also written eight books of poetry and a short story collection, “If a Stranger Approaches You” (Sarabande Books, 2013).

Kasischke has received fellowships from the Guggenheim Foundation and the National Endowment for the Arts, along with several Pushcart Prizes and numerous poetry awards. Her writing has appeared in Best American Poetry, Harper’s, The Kenyon Review and The New Republic.

She is the Allan Seager Collegiate Professor of English Language & Literature at the University of Michigan.

Maazel is a visiting writer teaching in the M.F.A. program in creative writing this semester.

She is winner of the Bard Prize for Fiction and a National Book Foundation “5 Under 35″ honoree.

She teaches at Princeton University and is the director of communications for Measures for Justice.

The Raymond Carver Reading Series is supported by the College of Arts and Sciences, the Syracuse University Library Associates, Stephen King, the Dr. Scholl Foundation, the Lynn & David Pleet ’53 Fund for Creative Writing, the Richard Elman Visiting Writer Fund, the Friends of Creative Writing, Chris Tennyson, Jerome Cohen, the Jane and Daniel Present Fund and the Interdisciplinary Fund for the Humanities from Leonard and Elise Elman.