Alumni Release Album—on a Can of Beer

Musician and Newhouse School graduate Adam Ritchie ’03 was looking for a unique way to release the new album from his band, The Lights Out. Of course, digital and retro vinyl were options, but he and fellow Syracuse University graduate Jesse James Salucci ’03, the band’s drummer, decided on something entirely new. The album, “T.R.I.P.,” was released on a beer can. 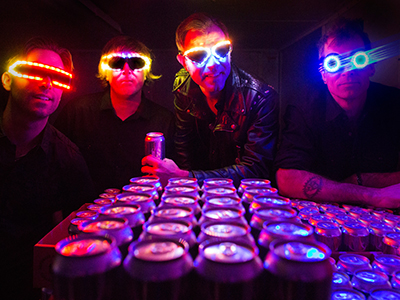 The Lights Out promoting their album “T.R.I.P.”

Ritchie, who plays guitar for the band and owns his own Boston-based public relations company, Adam Ritchie Brand Direction, says “T.R.I.P.” was a perfect opportunity to blend his love for media, music and beer. (The album can be downloaded using a Twitter hashtag printed on the can.) Here, Ritchie answers some questions about how the creative collaboration was born, and his hopes for both media and music.

I was a PR major and a music industry minor, had long hair and wore leather pants to newswriting class. I’d walk past the photo of Steve Leeds [1973 Newhouse alumnus and VP at SiriusXM] in the professional gallery and imagine my life as a cross between him and the musicians he worked with. I did most of my coursework in the upstairs balcony at Clark’s Ale House in Armory Square, a beer bar just behind the Landmark Theater. Clark’s was the first place I encountered real beer, and it had a big impact on my life.

Tell us more about how you started your company and joined the band.

When I graduated, we were in the middle of a recession, jobs were hard to come by and I was discouraged. I wanted to open my own public relations business before I turned 30, so I pushed myself hard. Starting my PR business put me in control of my entire schedule for the first time ever.

One night a friend invited me to a musicians’ networking event at a dive bar. He said they’d be serving free beer—see a pattern? While I was there, I met a singer/guitarist and a bass player who were in a new band called The Lights Out. They were looking for a lead guitar player who could also sing, and asked me if I wanted to audition. I did, and they asked me back. When we were exchanging phone numbers, the drummer [Salucci] and I did a double-take when we saw each other’s 315 area codes. It turns out we’d both gone to Syracuse the same years, both minored in music industry, even jammed with the same people, but never met until we’d both moved to Boston and joined the same band. Almost 10 years later, I have a PR business with clients on four continents, a band that’s created a real body of work and a barrel of stories from both halves of a dual life. And sometimes I find ways to combine the things I love, like music, media and beer.

There’s something anticlimactic about spending years of your life working on a record, and then throwing it onto the Internet like you’re tossing a silver dollar off a bridge and waiting for the splash. People may not be going to record stores every weekend to discover new music anymore, but there’s a place those same people are going every Friday or Saturday night to discover something new on a shelf. So rather than shopping “T.R.I.P.” to a record label, we took it to a brewery instead.

As a media person, the storytelling and presentation aspects of a finished album are almost as exciting to me as collaborating with other musicians to write one. We approached Aeronaut Brewing Co., which was founded by real-life scientists from Cornell and MIT—people who love science fiction and who are into beer that tells a story and that can be taken with you on an adventure. It took one email, followed by a meeting, and Aeronaut was on board. They got what we were trying to do, and after we gave them a rough cut of the record they started prototyping the beer. They concocted an imperial session IPA, which is a style that shouldn’t exist. But if you believe in contradictions and infinity, which is a running theme through the album, then they exist somewhere. Aeronaut brought that idea to life in this paradox of a beer. It’s specifically made as liquid sustenance for someone traveling between dimensions. The beer became the fuel, and the album became the soundtrack to the journey. What are the odds of a band writing an album about the multiverse and a brewery rooted in science-based storytelling both existing in the same city at the same time—and finding each other? It’s a good thing we believe in infinite possibility, because in most universes, this collaboration never happened.

What has the response been so far?

Through “T.R.I.P.,” I’ve connected with other Newhouse alumni working in media, like Aaron Goldfarb at Esquire, Jason Notte at Marketwatch and Erin Carson at CNET. Part of the thrill of releasing a record is seeing the relationship people form with the music. It’s out there walking around, accompanying people on their travels and becoming part of how they experience a time and a place. With “T.R.I.P.,” we’re also getting to see how people interact with a beer. We’re observing this silver object flying through the world, going along with people on an adventure or sitting next to them on a quiet night at home. Someone’s even talking to us about making a Lights Out comic book, with us as the characters. Who knows what will happen. After 10 years as a band, we know you don’t go overboard celebrating the wins and you don’t beat yourself up too much over the losses. But it’s clear we’re on a path. In the world The Lights Out is creating, it’s a good thing we made the possibilities endless.

Story by Georgie Silvarole, a 2016 graduate of the Newhouse School. This interview was edited to maintain clarity.