Mark Jackson has been appointed the new executive director of program development in the Division of Advancement and External Affairs. Jackson, who was administrator of business and human resources for District 4 of the Ohio Department of Transportation, began in his new role in November. 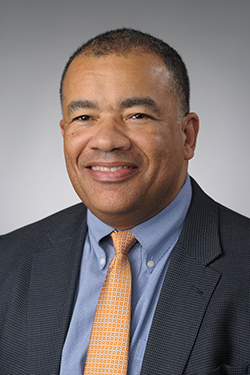 In the Office of Program Development, Jackson is responsible for operational excellence and fostering partnerships between the office and campus and civic constituencies. His key areas of focus will include budget management; process improvements; documentation and training, particularly as it relates to the Coming Back Together Black and Latino alumni reunions; the administration of the Our Time Has Come endowed scholarship funds; fundraising campaigns and technologies; and volunteer management for targeted events. Jackson will also work to develop new corporate and foundation relationships in an effort to secure corporate sponsorships that enhance and grow office strategies and initiatives.

“I am thrilled to have such a seasoned professional as our new executive director,” says Rachel Vassel, assistant vice president of program development. “Mark’s experience in budget oversight, process management and system integration will help us increase our effectiveness as an office. He is also a strategic thinker who will uncover and analyze key partnership opportunities that will allow us to further promote Black and Latino alumni and student success, engagement and giving.”

In his role with the Ohio Department of Transportation, Jackson had oversight of district finance, information technology, facilities management and human resources operations. He oversaw a successful implementation upgrade from a 35-year-old paper-based payroll system to an automated, technology-based system; oversaw an upgrade of the agency’s $55 million annual budget from a conventional historical process to a zero-based budget; and managed a successful interdepartmental collaboration that provided effective tracking of employee attendance, disability and workers compensation.

Jackson says he’s eager to serve diverse SU alumni in his new role. “I am excited to lend my skills and experiences to further the important work of the Office of Program Development,” Jackson says. “The talents and deep connections among SU’s alumni of color are incredibly important to the University and to our students, so I look forward to supporting and building programs and initiatives that will keep them engaged.”

Jackson also previously served as compliance and public education officer for the Summit County Board of Elections in Akron, Ohio. In that role, he developed a communications strategy for all key messages for elections, trained more than 1,000 poll workers annually, oversaw county-wide implementation of electronic voting machines and maintained partnerships with more than 225 polling sites.

Jackson attended Brown University before graduating with a bachelor’s degree in management from Malone College. Orange runs in Jackson’s family; he is the proud father of a Syracuse University alumna.