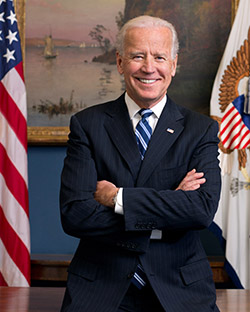 A citation, read at the ceremony, called Biden “one of the most consequential vice presidents in American history,” and said in part, “In a career of public service spanning nearly half a century, Vice President Joseph R. Biden Jr. has left his mark on almost every part of our nation. … A grateful nation thanks Vice President Joseph R. Biden Jr. for his lifetime of service on behalf of the United States of America.”

“I congratulate Vice President Biden on receiving the Presidential Medal of Freedom with Distinction, an honor that is truly deserved,” says Chancellor Kent Syverud. “Throughout his remarkable career in public service, he has been a stellar example of Syracuse University’s goal to educate and inspire students to make a difference. In every way, the Vice President has been an enthusiastic and valued ambassador for Syracuse University. We are proud and deeply honored to call him one of our own.”

After a 36-year career in the U.S. Senate, Biden became Vice President in January 2009. During his tenure, he continued his leadership on important issues facing the nation and represented the U.S. abroad, traveling over 1.2 million miles to more than 50 countries. Vice President Biden convened sessions of the President’s Cabinet, led interagency efforts and worked with Congress in his fight to raise the living standards of middle class Americans, reduce gun violence, address violence against women and end cancer as we know it.

Before becoming vice president, Biden was one of the most respected U.S. Senate voices on foreign policy, civil liberties and crime prevention. First elected to the U.S. Senate in 1972—at the age of 29—he went on to become a seven-term U.S. Democratic senator from Delaware and a leader on some of the nation’s most important domestic and international challenges. Chairman or ranking member of the Senate Judiciary Committee for 17 years, Biden was widely recognized for his work on criminal justice issues, including the landmark 1994 Crime Bill and the Violence Against Women Act, which contains a broad array of measures to combat domestic violence and provides federal funds to address gender- based crimes. As chairman or ranking member of the Senate Foreign Relations Committee since 1997, Biden played a pivotal role in shaping U.S. foreign policy.

An active SU alumnus, Biden gave the keynote address for the SU Law Commencement—in 1994, 2002 and 2006—and was keynote speaker at the MacNaughton Hall dedication dinner in 1998. He was the University’s Commencement speaker and received an honorary degree from the University in 2009. Biden last visited the University in November 2015 as part of the “It’s On Us” campaign against sexual violence.

He received the SU Chancellor’s Medal in 1980; the SU Law Alumni Association’s Distinguished Service Award in 2003; and the George Arents Pioneer Medal, SU’s highest alumni award, in 2005. His late son, Joseph R. “Beau” Biden III, was a 1994 graduate of the College of Law.